I seem to be having issues with checking out the radio insurance market - more on that later. I would like to share my happy experiences, but it is just a thankless chore, to be honest.

But it got me making an inventory of all my accessories. The best one I have is my Tennamast. 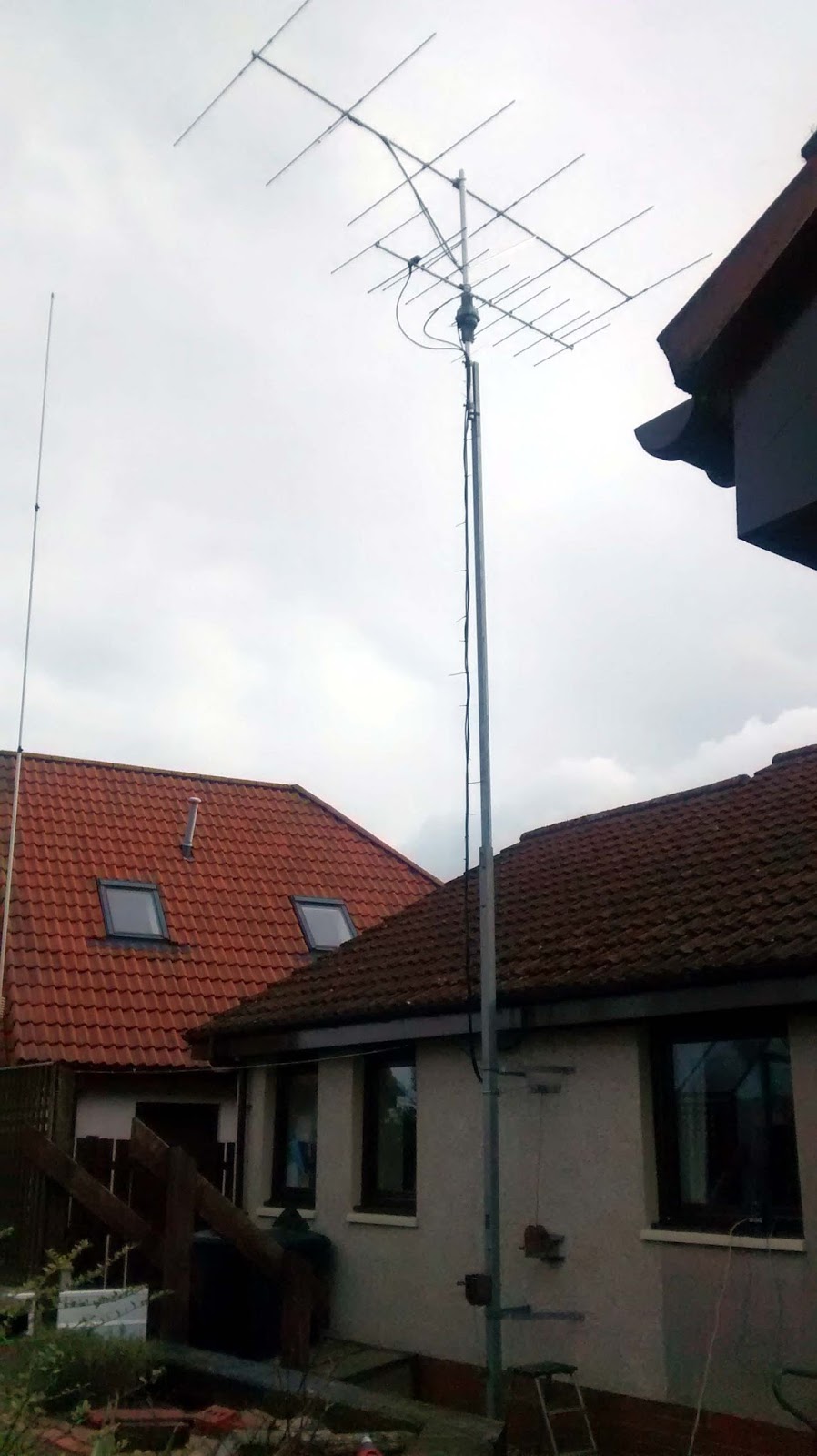 I have always wanted one of these, but it only arrived here about 5 years ago. Mine is the "Adapt-a-Mast" tilt-over type one, which is fixed to the house wall by extremely sturdy brackets. That is the safest method as far as I can see. No climbing, and the house offers wind protection.

I have no connection with Tennamast, I just like the product they made which I bought.

Tenna have a range of masts available, and they will ship them to many places. They are based in Scotland and when I spoke to them recently they had sent one to New Zealand. I am not surprised as they are a very effective product. I would say that, pound for pound, it is the most effective piece of equipment in my station.

The Adapt-a-Mast which I have is 7.6 metres. That is the smallest they sell. They recommend maximum height above the rotor of 2.1m, so 7.6+2.1 = 9.7m to the top, plus the rotator and lower mast, which makes about 1m possibly. Mine is about 10m as I do not use the full 2.1m above the rotator. At that maximum height the antennas cannot be seen from the road outside our house when the mast is lowered.

You can also buy a 10m version of the Adapt-a-Mast. It is mainly intended for mounting on two storey houses. It might go on a gable end (I am not sure about this) but it is not what I am after. The extra height would help, but I am happy with what I have.

The shorter Adapt-a-Mast I have is a two section mast. The two main sections are square section alloy tubes which fit into each other. So the mast is raised and lowered by a winch (mine also tilts by a winch - see later). The smaller section sits inside the larger section, and is then pulled out to raise the mast.

Tenna make the Adapt-a-Mast in both non-tilting and tilting sytles - the non-tilting is cheaper as you do not need the winches, pulleys and wall bracket needed for tilt. As I have never been a good climber I chose the tilting one. Now I am a worse climber than before, so I need the tilt even more.

The standard winches supplied are good enough, but I opted to upgrade mine. You have to release the ratchet on the Dutton-Lainson winches to lower the mast or tilt it. I feared dropping the winch handle as it lowers, though that is pretty unlikely. Tenna offer braked ones, but they need back pressure to operate. Yes, they will brake, but only after a short fall or tilt. Yep, sure that is fine, but I installed a pair of Dutton-Lainson worm gear winches instead.

The point about worm gear winches is that they stay wherever you leave them - half wound up or fully wound up or wherever. They were not cheap, but they are very effective. No ratchets now. Doug, 2M0LAT kindly made a couple of hex bolts which fit into my power screwdriver and drill. Now I can wind the mast up and down, and tilt it over and back, with the battery powered drills. Simple. Doug also drilled out the winch frames to fit the Tenna brackets. Job done. Electric winches with no mechanics outside to rust, as the drills stay nice and warm charging in the house. 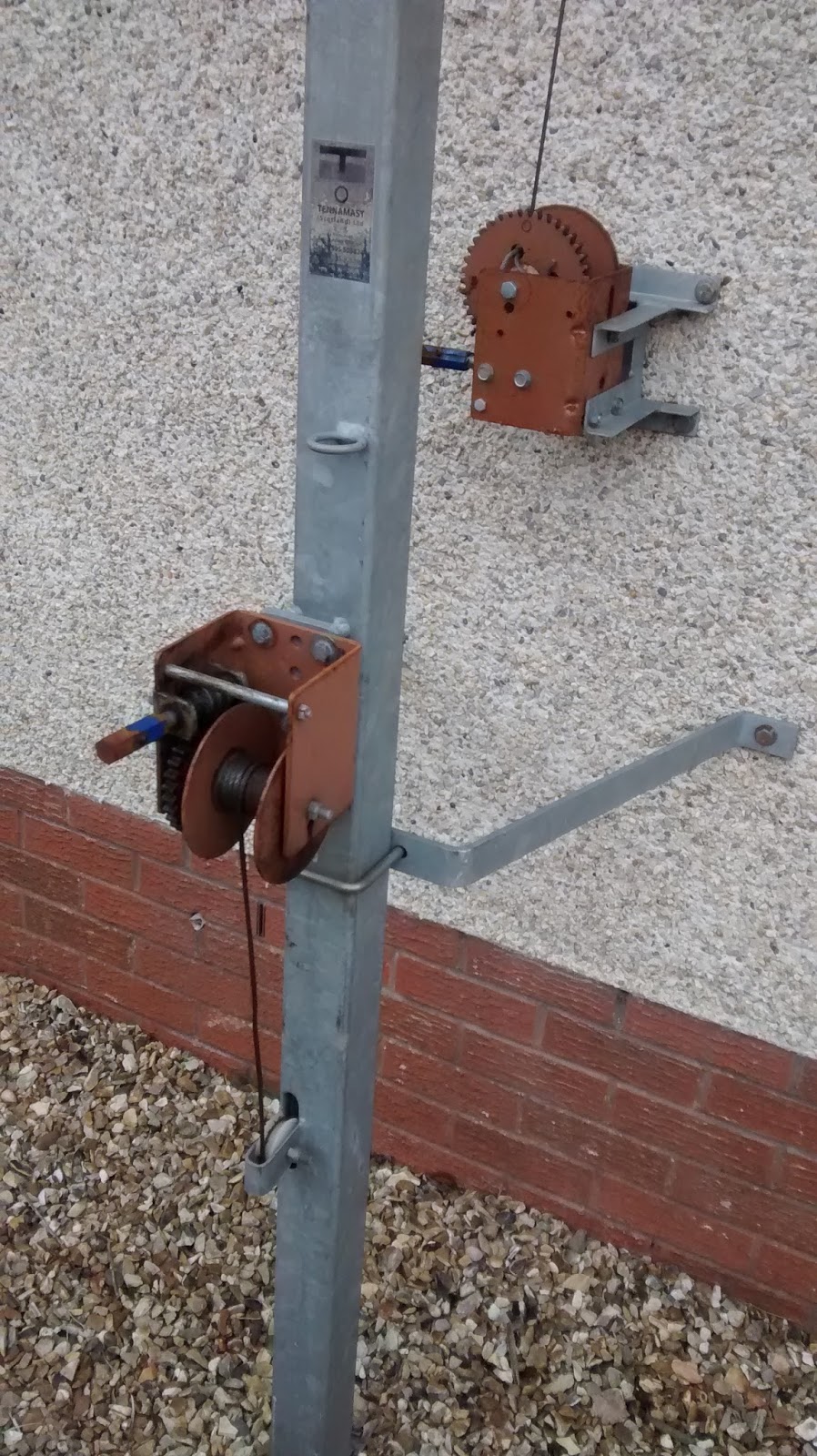 The second photo shows the base of the mast, lower mounting bracket, winch for raising the mast and at the back secured to the wall, winch for tilting the mast. You may be able to see (click on it to enlarge) the rectangular clamp which holds the mast steady when not tilted over. So in normal use the mast is held on the backets and not supported by the tilting winch.

I always lower the mast when not in use. My neighbours should not need to look at it all day. Also, it protects it if the wind gets up overnight. Somewhere I saw a Google Streetview of our street with an image of the mast raised in the photo. They must have surveyed the street when it was in use. I only tilt it when I am working on the antennas, so it stays fixed to the wall by the brackets, lowered, most of the time.

Fixing for the mast is by the backets into the house wall. Each bracket is held by two expanding masonery Rawlbolts, four in total, plus the ground hinge fixing. When it tilts, the bottom hinge supports it. The bottom hinge is bolted into a buried concrete block, also fixed by four Rawlbolts. I do not remember now, but I think it is only a half metre square of concrete as the mast is supported by the tilt winch when tilted over. I bet for free standing masts you would need a lot more concrete - a square metre at least.

It was installed by two of us in a day's work divided into two sessions. Half a day to dig the hole and cast the concrete, then half another day to assemble it. We left the concrete for a few days to "go off" before doing the second half day's work. It arrived by truck but I could lift it on my own and carry it round the house.

Tenna also make free-standing versions of their masts, which tilt from a winch on a ground post. I did not want one of those for all sorts of reasons. I would guess that freestanding Tennamasts they are easier to manage than the classic trianglar lattice masts, but maybe they can carry a bit less headload than the heaviest lattice mast.

So there it is. At the moment I have a 6 element 4m beam, 2m dipole and a 10 element 2m beam on it. At various times I have had a two element HF mini beam, verticals, and assorted beams, and the joy is that I can tilt it over and shuffle them around. My antennas are changing regularly. It takes about 10 minutes to undo the brackets and tilt it over.

There must be some drawback. Not really except maybe that in the wind it rattles and groans a bit. This sound is the inner section bumping against the outer section. They have to be loose to allow for extending the mast. I do wonder though, could someone not design an angled wedge on the inner section which would fit against the outer section when lowered and hold the thing more firmly? But that is the sum total of my doubts.

There is of course the price to consider. It cost me about £650, whereas I could easily spend £2000 on a linear amplifier. That would add nothing to my received signals. By allowing me to put up better antennas the Tennamast let me improve both my received signals and also the signal arriving at the other end. Better value than a linear  I think. I have linears too, but they are not a patch on this thing.

I will put a link to Tenna's site on the right of my blog.