Grrr. I was SO angry yesterday. I was tearing my hair out and blaming everybody for what was going wrong with my Flex 1500.

I called CQ on meteor scatter on 70.230. I was called by EI4KF. We could not finish the QSO after an hour. He could hear me, but I could not hear him. 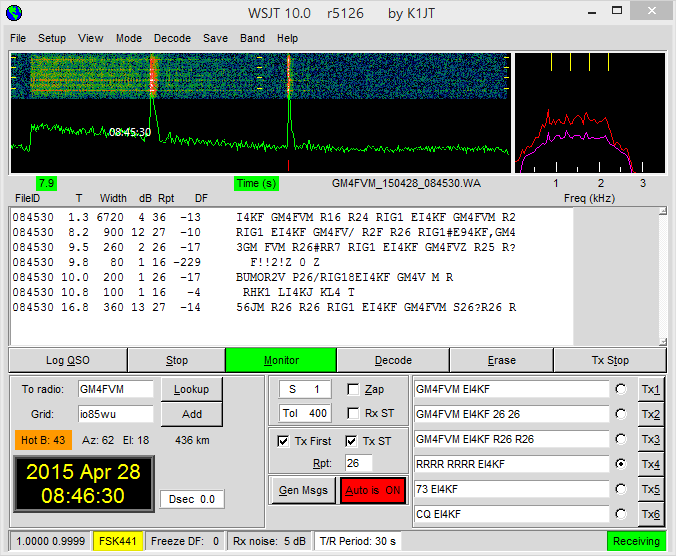 I only have a blank screen to show.

I tried both the Flex/ME4T combination, and the IC-7100 but it was mostly Flex/ME4T.

I got one burst from Erik which gave me his callsign and report. Apart from that I heard nothing, yet he could hear me both by tropo and by meteor scatter. I sense that this had happened before with other stations using data modes.

This is very frustrating as he had spent a lot of his time and I was getting nowhere.

It almost seemed as if I could hear weak signals in the speakers which were not decoding in the WSJT software.

It is true that he was running his full legal power (50 watts) and I was running 125 watts. Also, I have a 3dB higher noise level in his direction. But still, that was a poor result at my end.

I can cut a lot of this description out. I can save you the 24 hours of jiggling I did to pin the blame down to the virtual audio cable (VAC) level coming out of the Flex. I eliminated the WSJT software, the VACs themselves (by loading different VACs which were worse), and in fact everything else. It HAD to be the VAC output from the Flex. That was as far as I got when I stormed out yesterday evening.

The problem boiled down to this. I could turn the pre-amp on and off and that produced a 12dB change in the noise on the Flex waterfall and on the speakers. But the VAC was unchanged, as shown by the noise level on the WSJT software. Something was acting to keep the VACs 100% full of noise.

Eventually I noticed that the Flex "AGC-T" slider does not work as I had expected on VAC. Certainly, it reduces the noise on the display and the speakers. However, at the default setting of 90 it was stopping the WSJT software reacting to changes in level from the receiver. In effect it was overdriving the VAC at that level, though nothing was apparent on the screen or on the speaker. Reducing the AGC-T to 73 restored normality. that setting produced the same 12dB reduction in the VAC output as shown on the screen and heard in the speakers.

So basically the output to the VACs was being overdriven on receive, unknown to me.

I have no idea why the output to the VACs would be overdriven when the display and speakers showed no problem. The VACs themselves were fine, and reducing their gain controls just meant that the overdriven signal reduced in volume at the other end. So whatever it is occurs inside the PowerSDR software not the VACs.

I have now read a lot more about the AGC-T settings. I certainly looks as if Flex think that they should be adjusted on a band by band if not QSO by QSO basis. No chance of that here with data and so forth in operation. However, I can see that my combinations of filters, pre-amp and band settings on the Flex may have got things out of kilter.

So I have re-set AGC-T to 73. Let us see what happens next. Certainly, the beacons sound good on it. The spin off on the screen and speakers seems to be beneficial too.

I am still suffering with the cold. Maybe that is why I got so cross with all this. I had to shut down and leave the room. I was REALLY ANGRY. Not angry with the rig, angry with myself for not knowing what was wrong, and wasting Erik's time. Plus I need his square! I took it out on my new rig which was ordered in December and still has not arrived. I fired off some emails and generally got my frustration over that out too.

Sometimes I think it is not necessarily bad to blow your top. I have put up with a lot over the non-appearance of this mystery rig. So it was time to express that. The issue with the Flex just got me wound up ready to fire.

Anyway, normality has been restored for a while.

I need to work some DX on meteor scatter to prove everything is OK. And maybe take an "anger management" course.