I have been writing these posts as multi-subject essays but I hope from now on to do just one thing at a time and just make more posts (!).

About 3 weeks ago our neighbour installed power line adapters. The PLAs in question were branded TP-Link but there are lots of makes. Some make less noise than others.

How did I know that my neighbour had installed these? Well, the 50MHz band was immediately submerged under a wall of radio noise. Much tinkering with the Noise Blanker settings on the Icom IC-7300 allowed me to separate out two distinct types of noise - 1st a sound like a chicken clucking which was there 24 hours per day and - 2nd a wideband swoosh of white noise of varying strength which happened at certain times. Presumably a constant status signal with wideband saw-tooth type signal when data was being exchanged.

At this point I am going to try to upload a video clip to this blog. If it works it shows an unsteady image of the IC-7300 receiving the noise, and at one point me turning the noise blanker on to reveal the two separate components. As I have never managed to upload video successfully to this blog platform we shall see if I can get it to work.

Although the noise blanker could be made fairly effective against both noises this required me to adjust it to maximum settings. When I did that reception of FT8 was affected. So with NB on I could combat the noise to a large extent, but then I could not use the radio. Turning the noise blanker off pushed the AGC into overdrive and signals vanished.

This is always a difficult situation as my neighbour was simply following the advice of our local television antenna/satellite dish installer. This particular installer loves installing Power Line Adapters (PLAs). The idea of the PLA is that it works by injecting an RF signal down the house mains supply wires and then receives the signal somewhere else. The units are fitted with Ethernet sockets, and in this case were connected to an internet router at one end and a television at the other end. They are cheap, and easier than cabling the house. So he uses them a lot.

I needed to be pretty certain that the noise was coming from this source. It is not easy to approach a neighbour and suggest that something they have just bought is causing me problems when it is clearly not causing them problems. Especially if you have picked the wrong house to blame. So, amongst other things, I swung my beam round to see if the noise was directional (if it isn't it is probably coming from this house). The neighbour's house is located South West of me so I took compass bearings as I turned the beam. 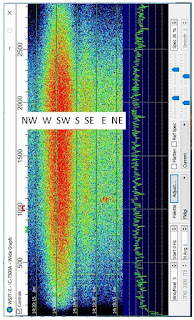 This is not the first time this has happened to me. Last year my neighbour on the other (East) side had a similar experience. She had installed a proprietary internet TV system supplied by BT, and the same installer fed it using a pair of BT branded PLA adapters. The resulting noise then was FAR worse than this time, as it was clearly getting into the mains supply of this house. That problem was resolved by the neighbour accepting my offer of a wi-fi alternative to the PLAs.

So I offered the same solution to the second neighbour with the latest PLA installation. He told me that the installer had tested the wifi signal and that no reliable wifi could be found at the television end so the installer had sold him the PLAs. I offered to try out a wifi solution at no cost to him. He agreed to this and I followed the same process as before. The device I tried was the same as before and still listed on Amazon as:-

EDIT:- In the past couple of years it has gone up to nearly £25. I cannot keep up with the price but it was still available last time I checked. The first system has now been in use without fault for 4 years.

Whatever else it can claim to do (it is basically a wi-fi repeater), it has two key features for me. First it has two Ethernet sockets and can provide an Ethernet output for wi-fi links. And secondly, it has a very sensitive wifi receiver. It doesn't photograph very well:-
Anyway, over the past year I have bought 4 of them to solve various similar problems. The neighbours on both sides now have them to replace noisy PLA systems, and in both cases the noise level has fallen back to negligible. I also have one myself which gives a perfect picture on our television, whereas the on-board wifi cannot find a satisfactory signal. I fit them with CAT6 cables to reduce RF interference (both in and out!) and set them up for repeater mode on the domestic wifi. Then I just connect the Ethernet cable to the television.

There are two Ethernet sockets, so a fourth one has been used by me to provide a wifi fed local area wired network for two computers. This is not completely noise free but pretty good - certainly miles better than PLAs could produce.

I had expected to have to fit a repeater to reach the television in the case of the second neighbour. After all, the TV installer had said that the weak wifi signal required him to sell them a set of PLAs. As it turned out the XINGDONGCHI device got a perfectly good signal from the domestic router located at the other end of the (large) house.

No doubt other products are available which do the same job, but these ones suit me. They are cheap and effective. Some reviews say they are unreliable in the long term, but the first system has now been operational for a year.
Perhaps the main drawback is the bright blinking LED light display. Homer Simpson from the popular television cartoon series "The Simpsons" has a solution for this type of thing. He sticks some black tape over his annoying car "low oil level" warning light  Perhaps for this in a domestic setting we might use neat white insulating tape. Note that with UK plugs the device appears upside down. The upper photo has been reversed by me, the lower one shows the device as it actually appears - upside down.

Anyway, in my view PLAs are terrible. They are supposed to be "notched" so as not to produce signals on amateur bands, but the TP Link ones produced nasty noises on the 50MHz bands - but not on 28, 70 or 144MHz. Anyway, the best solution seemed to me to remove them entirely.

We will need to see in the long term how effective these are. Mind you, for a year now the first one is providing a reliable signal to a BT box. That device happily streams high definition video (so does mine for our TV). Bandwidth does not seem to be a problem. The resulting data speed has so far proved just fine for my neighbours and me.

All this makes me think of a different issue. BT supply their steaming box (which is a hybrid "Freeview" digital TV recorder and internet decoder) with only an Ethernet socket for connectivity. At the same time they advertise their Broadband internet service as having the best router and wifi signal available. Do they not trust their wifi signal to supply their television box? So far I find that my neighbours are perfectly happy to have wifi connections instead.

And I am perfectly happy to stop all that noise.

This is bad business for BT. I decided not to buy their box as unless it was right beside a router it could only be supplied with PLAs. Now I discover that was never true. In these three installations PLAs are not necessary for domestic television viewing.

Final thought - you might have PLAs in your own house. It might be worth doing away with them and I am sure you can come up with a solution - maybe hard wiring using at least CAT6 cable?

Power Line Adapters? I say "Down with this type of thing".

Email ThisBlogThis!Share to TwitterShare to FacebookShare to Pinterest
Labels: Noise