Is it worth getting up early in the morning?

Normally, I would say that it is NOT worth getting up early in the morning. For radio, maybe, but for my general mood, NO.

This time I have had a cold. I have been coughing and spluttering. Mrs FVM has just finished two weeks working in London making the money to buy the rigs. She was totally exhausted and my coughing was waking her up. So I got up at 05:00. No point me keeping her awake.

I turned on the radios and set everything up, sat down to watch Frasier on the TV and fell asleep.

On WSPR  I managed this:-

A two way to VK2KRR - well, only 50 minutes between me hearing him and him hearing me. I was hearing other VKs and JH1GYE. He was running 10 watts and I was running 0.5W. Generally most WSPR fans stick to 5W as the max. I am not going to increase to 5W just to be heard by a lot of stations. I want to see how well 500mW works and the World just needs to adjust to fit round me.

The only station to hear me between 05:00 and 08:45, so far, has been that one spot from VK2KRR. Yep, I am sure that some of the 50 or so stations I can hear could also hear me if I ran more power, but that would rather defeat my objects here. I was running low power, nobody in Europe could hear me, but I was heard 16,000km away. I like that.

Anyway, Frasier was over and the new 6m antenna has been tested. I heard SP2HRR pretty loud on the meteor scatter frequency of 50.230, calling for replies on 50.244. We then had a very quick QSO. It is still the end of the Lyrids meteor shower (missed most of that) so his signals were pretty easy to hear (and see!). 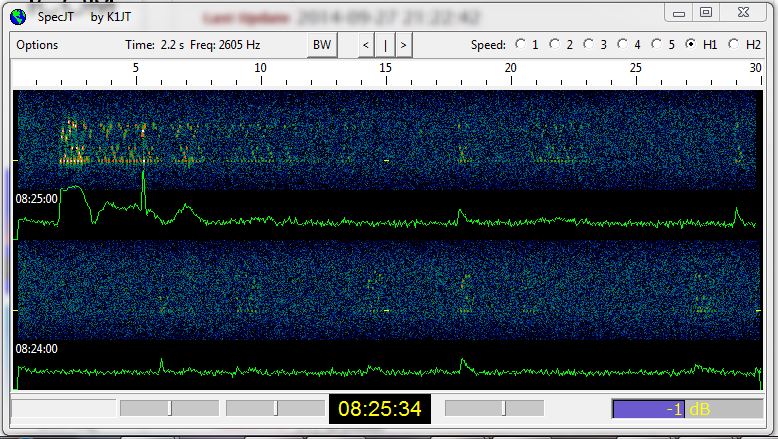 This is the sort of trace I like to see on meteor scatter. Nice strong pulses. Easily heard on the speaker. The QSO was over in less than 10 minutes. 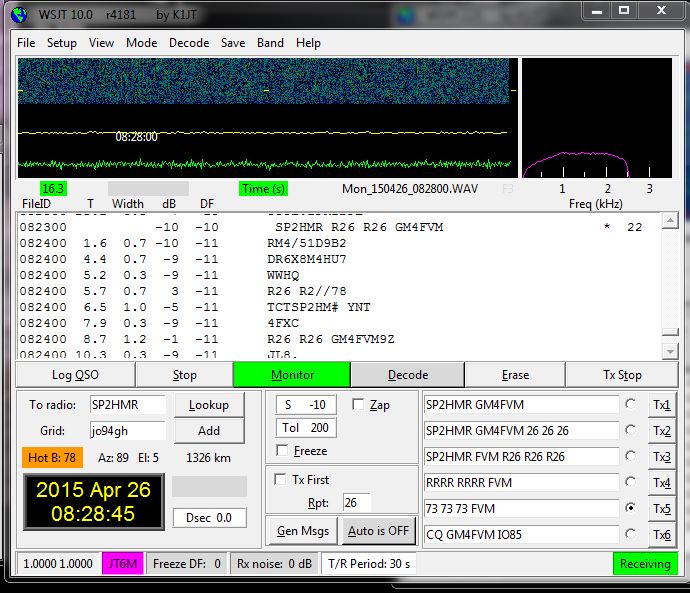 JT6M, which is the mode most used on 6m, does have a lot of garbage coming up in the screen during QSOs. On FSK441, which is used on higher frequencies, you get much less garbage. However, FSK is not really suited to long periods of reception, it is more for very short bursts. Shorter than these ones anyway.

JT6M has been superseded by ISCAT, but most 6m operators stick to JT6M. Pity really. It must be frustrating for the developers to devise a new and better mode and find that amateurs do not take it up. I believe that PSK was devised to replace RTTY, which, sadly, it has not done. I do not like RTTY at all.

I think that a 1326km meteor scatter QSO, using an antenna with a boom length less than a metre, slung up just over the level of the roof, with a standard 100W transceiver, is pretty good. I keep hearing the cry "6m is dead" from people who cannot plug A into B and work some stuff. OK, the stations at the other end may have 6m booms and fancy kit, but you can do OK without it.

Speaking of which, cold or no cold, there was a break in the cloud and rain yesterday and I put up the Sirio 4m vertical again. Much lower than before but at least it is up for now. The locals were complaining that it is too low. Well, for now it will have to do.

My 4m FM rig is my propagation detector. It scans channels from 69.990 to 70.500, and it is great at spotting Sporadic E lifts. For that purpose the antenna does not need to be very high. Sporadic E, like meteor scatter and aurora, has signals arriving from quite a high angle. So the antennas do not need to be very high. I am not very bothered about not being able to hear locals on 6m or 4m, so they will have to accept this. The dx will get through.

Having said all that, both the 6m HB9CV and the 4m vertical will be going as high as I can get them in due course. Highest is best for dx, whatever the angle of propagation.

However, I have to proceed in gradual steps - ideally not spending any money as I go.