My HF antenna, the Sirio Gainmaster.

This is not going to be easy to illustrate as I cannot get an effective photo of it. It is 7.36m tall from the base to the tip, so I need a pretty wide angle lens to get it all in.

I tried and this is the result. Most of the photo is the Tennamast; the Srio is on the left. 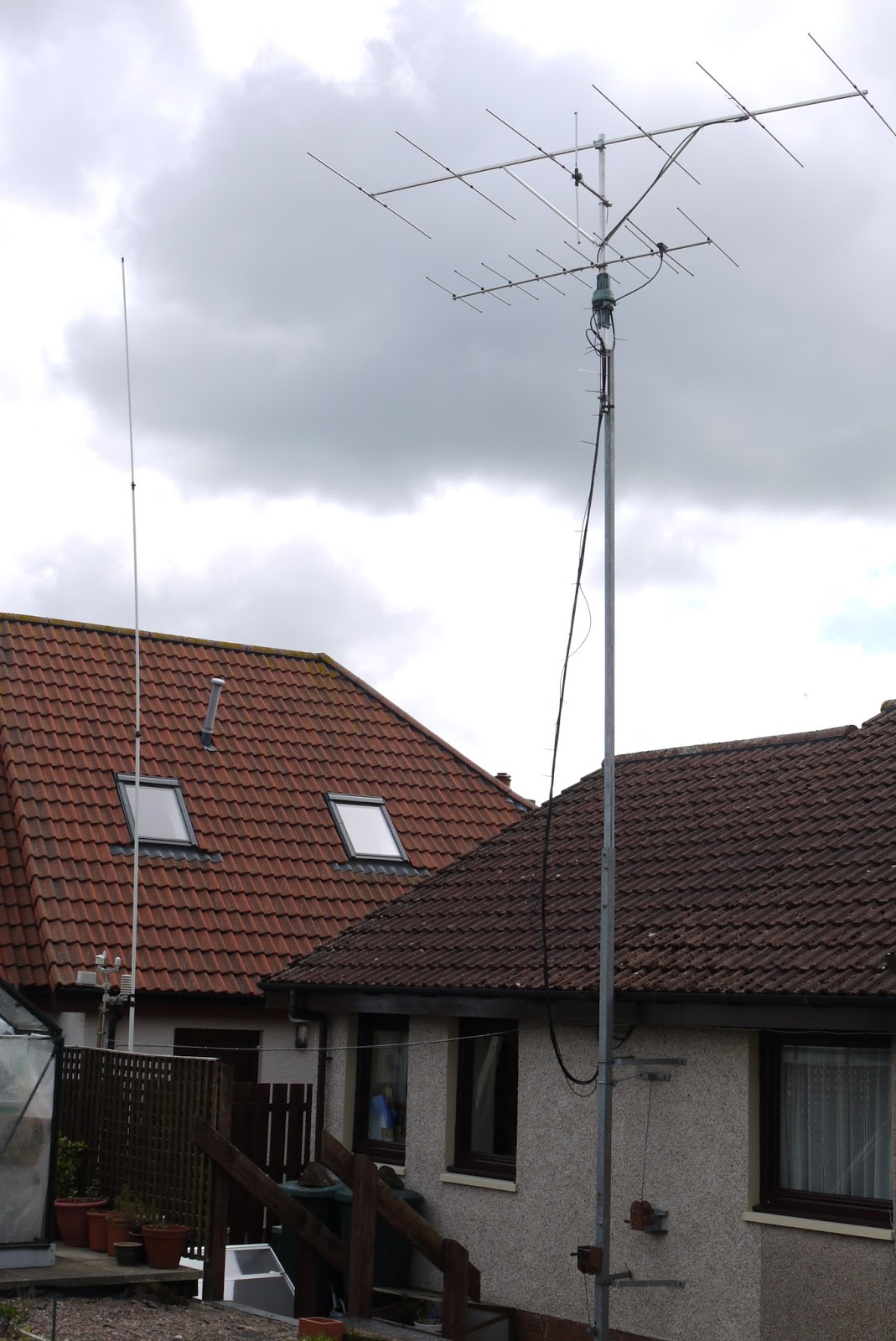 The wind seems to be catching it as it is not quite vertical. I see that Sirio recommend using guys in certain situations:-

- Locations subjected to strong wind or constant gusts of wind (eg: coast and mountain areas).
- Locations with cold winter conditions and frequent formation of ice layers on the antenna body. In fact, the different distribution of the weight, can change substantially the resistance to the wind.
We therefore recommend at least 3 ties "NYLON" bracing to be fixed at the junction between 2° and 3° fiber pipe (see drawing).

Anyway, I like balanced antennas and I do not like "ground plane" antennas. The ground here is VERY dry and sandy. There is no ground plane to be had here, and I would need to add lots of radials. I had been toying with the idea of a vertical dipole but they are hard to construct. You need to support them in the middle and run the co-ax away at right angles, which means very heavily built supports.

While I was thinking about how to do this, I discovered that Sirio make this vertical dipole, basically as a CB antenna. The details are on the Sirio website here. I bought it on eBay from a supplier in England I have used a lot and it cost about £100. Not cheap.

It seems to be a "sleeve dipole" or a "co-axial dipole". With this design you basically take a length of co-ax and strip the braid off the last 1/4 wavelength. This becomes half your antenna, and the 1/4 wavelength of braid before the stripped bit becomes the other half. Straight away this is not very satisfactory, and you need some method of isolating the braid part of the antenna from the rest of the co-ax, as otherwise unbalanced currents flow down your co-ax and give you all sorts of SWR problems.

I do not know how Sirio have dealt with this (everything is encapsulated) but there is a large coil of red co-ax at the bottom of the antenna. 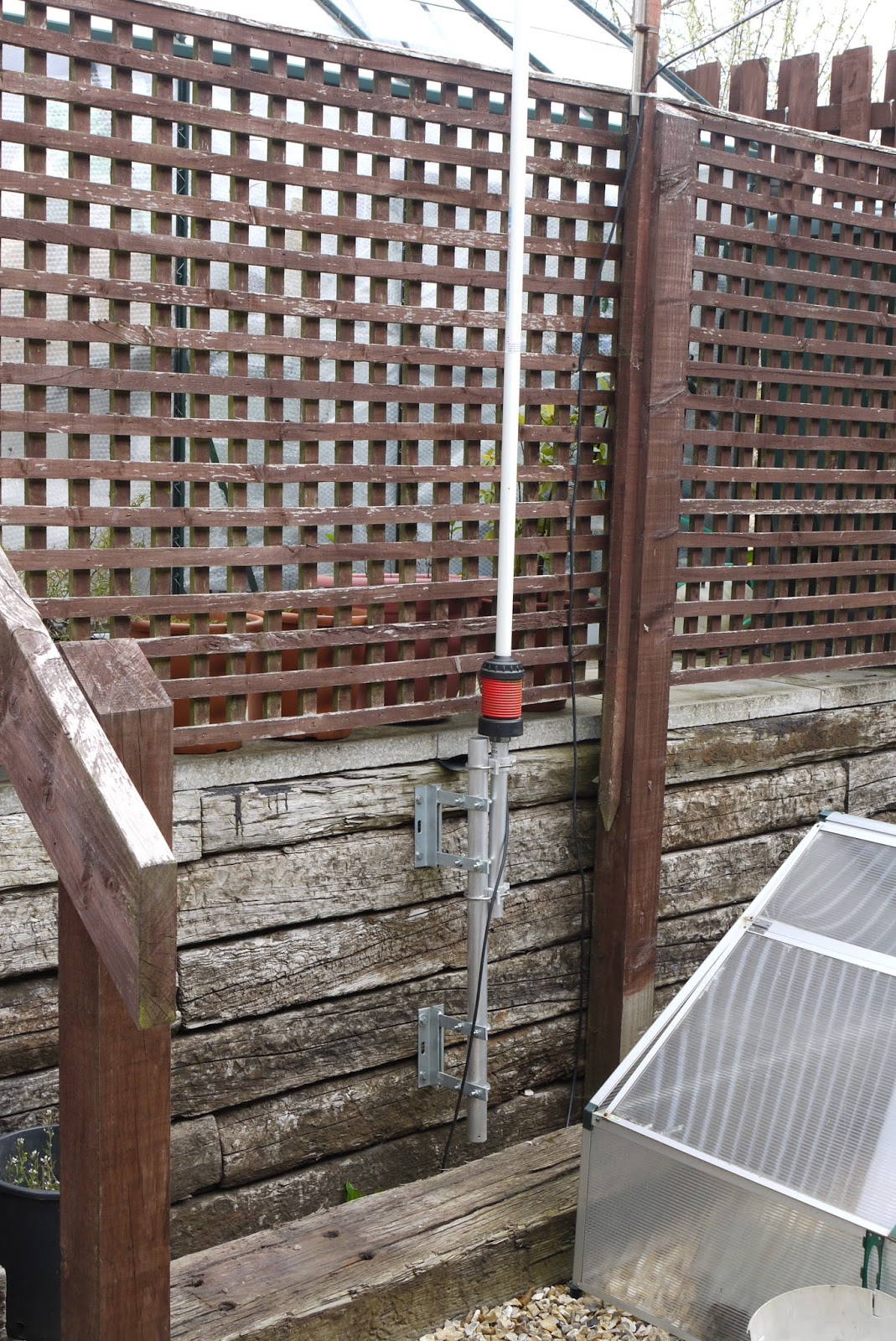 So far, so good. The two main features of the Gainmaster are understood by me. I did look long and hard at the publicity before I bought one. Vertical sleeve dipole - OK I get that: choke balun - yes,  use those, fine. But Sirio had another trick up their sleeve (dipole). The antenna is not 1/2 wave in total length but 5/8 wave. It has long been known that 5/8 is a better radiator than 1/4 or 3/4 wave. The disadvantage of this is that it needs a matching circuit to make it usable on 50 ohm co-ax (all those coils on the bottom of mobile whips do that). So that Gainmaster has a matching circuit (I think a capacitor and a coil - I forget) matching the impedance at the point where the braid is cut. Clever.

I do not know now why a 5/8 has good radiation efficiency. Maybe I did know once and I have forgotten. Anyway we do not need a string of complex formulae, let us just accept it as a fact. If you know, there is no need to write in and tell us - unless you really want to.

So this is not just a vertical 1/2 wave dipole but a 5/8 wave vertical dipole (or 0.625 wavelength as Sirio call it). No fractions in Roman numerals? The elements are copper inside a fibreglass outer whip. You get the whip in four sections and the elements wrapped up. There is a bit of assembly to do. The ends of the fibreglass sections are split and held by "Jubilee clips" aka "worm drive hose clips". I wrapped the joints in the fibreglass with self amagamating tape which has lasted three years and now needs to be replaced.

The Sirio has some drawbacks. It is one band only - though I do use it on 12 metres sometimes. The antenna it replaced covered 10m, 15m and 20m. On the other hand it works brilliantly well. There is nothing to do but put it up. It needs no radials, no counterpoises, no tuning and you do not need to rotate it. VK on half a watt - no problems. And - perfect for WSPR - it is omni-directional.

Personally, I think it is great if you like the 10 metre band. It is a real DX antenna.