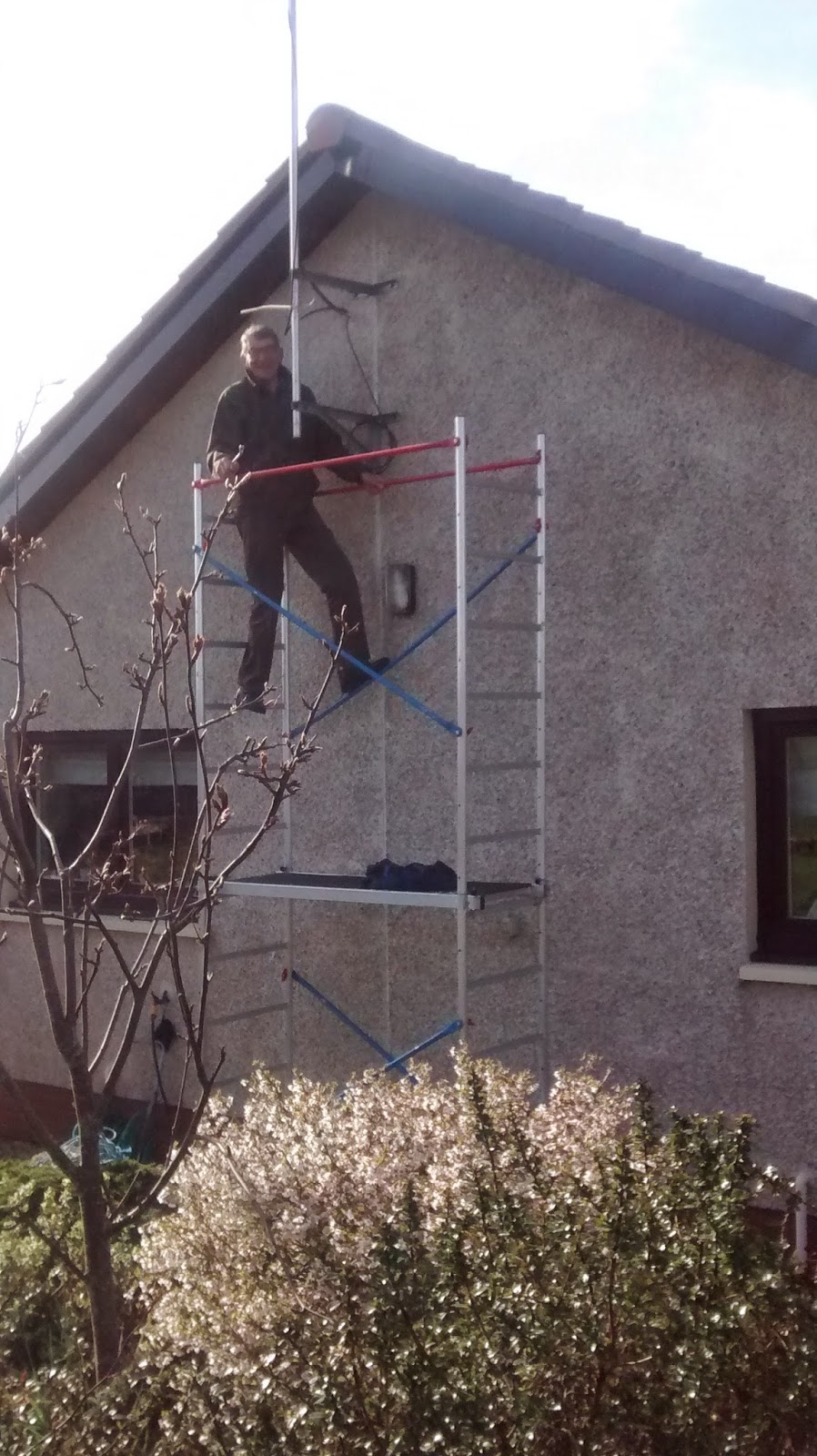 Doug, GM6ZFI arrived to help with the brackets, and promptly ignored the platform on the scaffold tower. He charged straight up the rungs at the side and balanced himself up there. I say balanced, he put his foot on one of the very weak crossbars - you can see it bend. He looks happy enough, and I can see why I did not do it that way.

The point is, Doug is a professional electrician and he is used to this type of thing. And he knows what is safe and what is not safe. He proceeded with great care, using protective clothing, goggles and ear protection, and it was real eye opener. He knows what he is doing, however scary it looks to me (I took that photo from a height: from underneath holding the scaffolding it felt that he was very high). It does look scary to me, which is proof that I was better to bring in someone who has spent years working up high.

What he has done is to lower the top bracket below what was the bottom one. It is now at a height that I can work on it safely from the platform on the scaffolding. Hopefully over the next few weeks I can get the 6m antenna sorted out once and for all (well, until I change it next time). Those brackets should be able to support something a lot better than the current HB9CV. Which would need a better rotator ...

I really appreciate what Doug did for me today. Doug is a real gent and a true radio amateur. He drove over here and did all this, provided the fixings, all for no payment. All I could get him to accept was coffee and a sausage roll in the Rialto Cafe in Eyemouth. I owe him several favours for that work today.

Yesterday and today brought Sporadic E to 6 metres in Europe.  A couple of stations in Scotland got in on some of it, but nothing was heard from here.

10 metre conditions are still struggling. It took 43 hours of silence, during and after the geomagnetic storms, for me to receive just one spot - and then not another one for hours after that. Although there have been a couple of longer distance spots on WSPR, generally I have been getting weak spots from Belgium. Nice but not earth shattering.

Shufflebottoms is back. Having just recast everything in the shack, I have already swapped the HF and 4m rigs. Although the FT-817 was doing passably well driving the 4m transverter, I relented and put the Flex on that duty instead. The FT-817 is now on 10 and 12 metre bands.

There is some logic to that. It was the set-up here about a year ago. It allows me to run the transverter on 1mW rather than 5W. OK, the transverter has an attenuator to reduce the power if needed, but also the Flex can also use separate tx and rx leads. This means that, should I forget to turn the transverter on, or the PTT lead falls out, or some other failure occurs, then I am txing 1mW into a dead end. If I was using 5W from the single cable FT-817, I would be txing 5W into the receiver section of the transverter - which is expensive as it blows everything up. It has never happened to me, but I do not like tempting fate.

The FT-817 receiver is OK; the Flex has a better receiver. And for some reason the Flex is driving the transverter harder than it was. Whatever Gabi, HA1YA, did to the transverter when he gave it a make-over has done the trick. I have also provided the linear with a dedicated power supply right beside it to reduce voltage loss in the supply leads. All this means that I can get the full legal 150 watts output on 4m. Not that I am running more than 100W in normal service, of course.

So that is where we are today. If I decide that the Flex/transverter set-up is not very good on meteor scatter, which was my mad belief before (impossible, surely), everything will change ... again.