Trans equatorial propagation, something I don't get here. 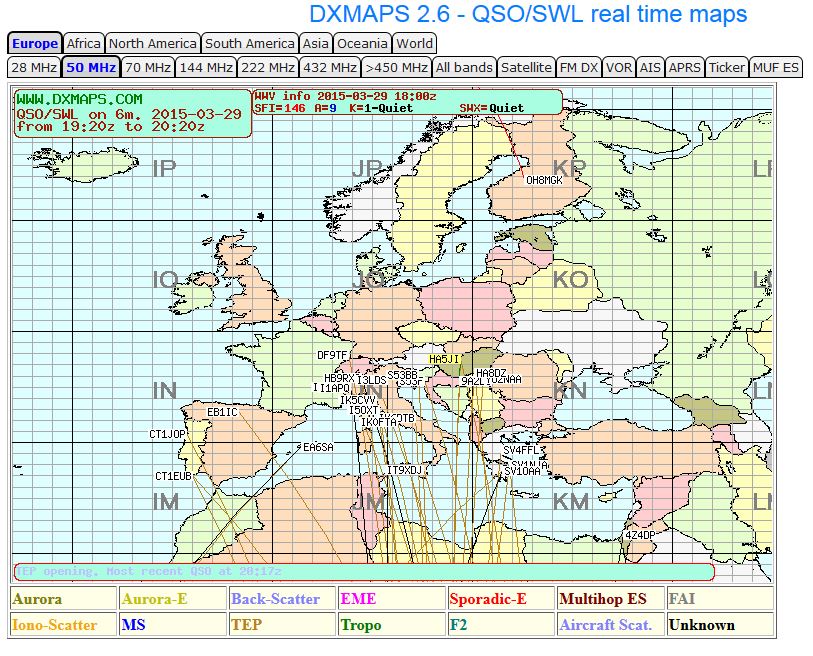 This image is from DXMAPS, and I shall add a link to the DX Maps site. It is a brilliant site. I contribute to it, anyone can watch it. It is run by Gabriel, EA6VQ. It must be a lot of work, and I think it is worth contributing some Euros from time to time in exchange for this great service. Not only can you see the spots on a map, you can also see the list of contacts. Very useful is the "ES MUF" map, which shows were the Es clouds must be located. Very helpful.

The shot above shows TEP in full swing on 6m, though it also works in my beloved 28MHz and 70MHz bands too. TEP does not come as far North as 56 degrees. These contacts are often 7000km+ - e.g. Greece to South Africa or Reunion in the Indian Ocean - quite something for VHF. All I can do is sit and watch it all happen.

There are several reasons why TEP does not work from this QTH. One is that the geometry of the situation does not extend this far North. The "equator" in this case is the magnetic equator, which is displaced from the geographical equator. Even then, I am probably too far from the equator to see the ionised clouds on either side of it. Secondly, a comparable distance South from here would be South of Africa, in the Southern Ocean. Not much activity there.

Recently though I saw a TEP spot on DX Maps from a station about 250km South of me. That is a lot closer than usual. He was only hearing a beacon, which I bet was frustrating for him. We do not know if it was possible 2-way and if a QSO could have resulted. However it shows that, given the right conditions, TEP can come relatively close to me.

Maybe one day there will be a TEP opening from here. Given the right conditions, other propagatiion modes could link into TEP. For instance, perhaps Sporadic E could carry my signal far enough South to reach the Northern extent of TEP. The snag is that Es occur here in the Summer (and for a few days in Winter) whereas TEP generally occurs in Spring and Autumn. So there might only be a few days each year with the potential for it to work (if it would work at all).

Other methods of bringing my signal South have been suggested as a way to link into TEP. Tropo ducting might work but since I moved here there has only been one good tropo opening in 7 years, and a couple of limited ducts. Still, it might work. Certainly in the late 1970s there were quite a few tropo openings but that seems to be a thing of the past now (climate change?). Tropo scatter might also work, but it would be VERY weak. Right now I do not have a very good 6m antenna.

And then the other factor arises. How badly do I want to gain access to TEP? You might say "move to France or Portugal". Yeah, well then I would lose most of my beloved aurora, auroral Es, Thule-Es and so forth. Auroras are less predictable than TEP, but maybe that makes them more fun. Ordinary sporadic Es are much less common here than in the South, but I value them more. Maybe their very rareness makes me appreciate them. Anyway, how could I deal with all the sun and the lack of snow, gales, and driving rain? How could I get Fig Rolls and Newcastle Brown Ale in Portugal?


So maybe I just have to accept it, I need to watch TEP going on and accept that it is not for me.

But you never know.

I seem to do OK without it.

Jim
GM4FVM
Thanks to Gabriel for permission to use the screen shot.
Posted by GM4FVM at 11:59