6metres and how I can't climb any more

OK, the 6m antenna is now up and ready to go. 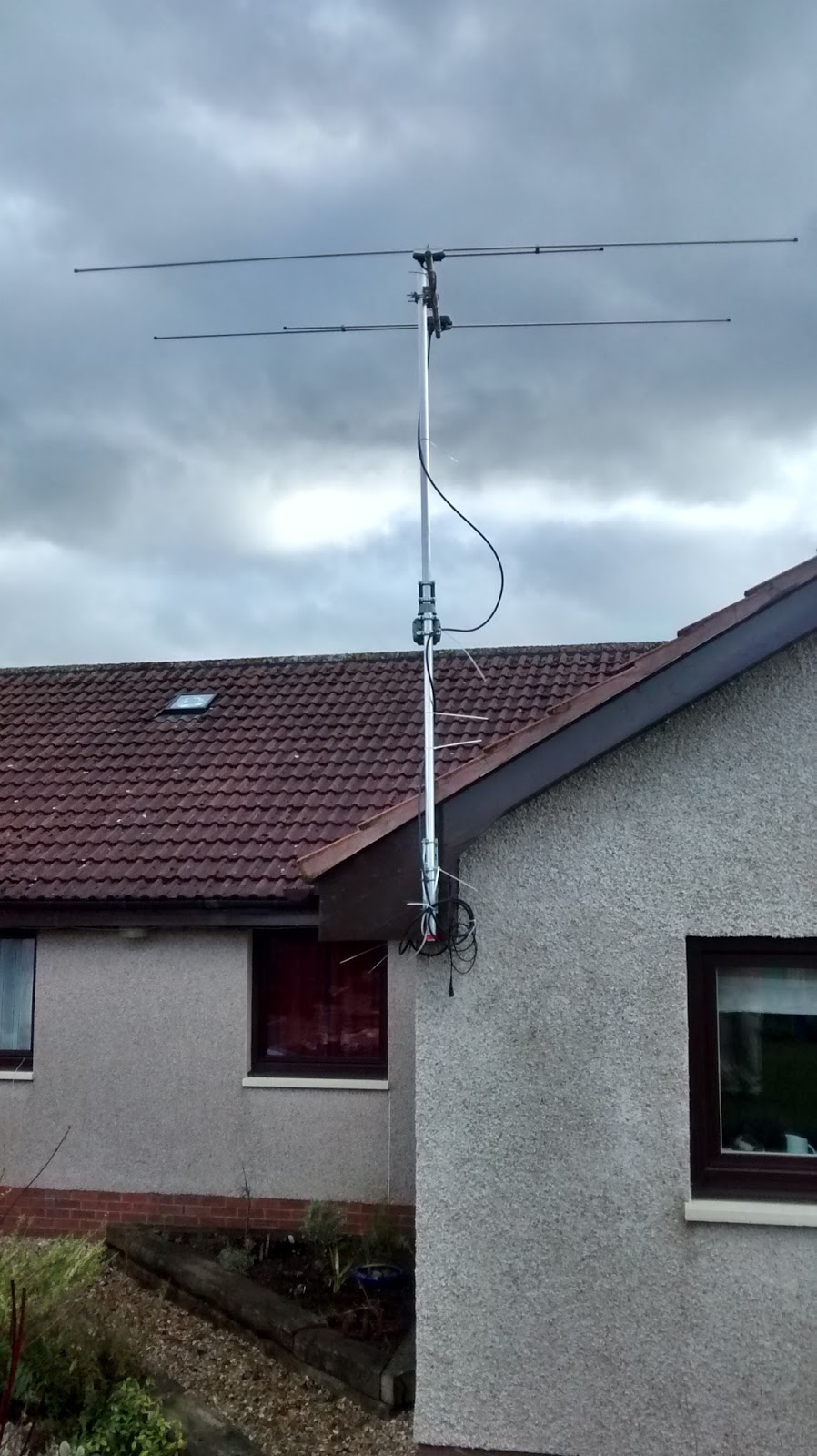 Unlike my 4m or 2m horizontal antennas, this is a not a DX one. Perfectly effective, the Diamond A502HB is not exactly a high performer. It claims 6.3dBi gain, which is good for a 2 element, but not in the 3 element class. Having replaced a 3 ele on 6m with a claimed gain of 7.24 dBi, it could be seen as a step backwards.

The explanation for this is that the previous antenna was a dual band 4m/6m, and that space is now occupied by a much better 4m antenna, so 6m will have to get along with this. So the 2m half wave which was up on this bracket has been replaced by a vertical dipole on the main mast, and this rather weak bracket now has to support the 6m set-up. Why not put the 2m half wave vertical on the main mast - well I tried, but it only takes a 37.5mm mast and my main mast is 50mm.

This is starting to sound more like an edition of Peyton Place than a radio blog (reference only understood by those over 95 years old). Erm .. struggling for a more modern comparision ... more like a Twin Peaks edition. Now that shows my age too.

The Diamond antenna is often referred to as a Yagi, including by Diamond America. But in fact it appears to be based on the HB9CV design (not that Diamond say THAT). Both elements are driven and the arrangment is entirely out of the HB9CV design book. That is what gives it extra performance over a Yagi and in particular a very short boom. It only loses about 1dB over my old 3 element Yagi, and I have worked Puerto Rico on that. So it is perfect for lightweight rotators and simple brackets.

Key to the whole thing is that all the materials, except the 3 core mains flex used for rotator control, was already on the premises and therefore cost nothing extra.

OK, the 6m set up is RG-213 co-ax, two old 6 inch TV mast brackets, Conrad £50 rotator, Diamond AH502HB and two 1.25m lengths of 37.5mm OD thick wall ali mast. The design issues here are obvious. "It'll fall down", you say. These brackets held a Watson X-30 "co-linear" (actually a half wave on 2m and only a co-linear on 70cms). Now they have a much heavier load. The rotator is lightweight in rotator terms but heavy for the brackets. I have split the pole lengths roughly evenly. I had intended to have a shorter 50mm pole at the bottom - but the brackets only take 37.5mm !!!! Also, the rotator is only meant for light duty, and seeing it with a two metre long pole above it scared me. So compromise is the order of the day.

I first put it up two days ago and tested it about 50cms lower in a wind of 80kph gusts. It whipped about a bit, but lasted the wind. We do get well over 100kph gusts here. Now it is at full height. Worries are whether the rotator can take it and whether the brackets can take it.

Now here is the awkward bit. The obvious thing to have done was to leave my 2m vertical where it was and put the Diamond under the Sirio 4m vertical I have. It is supported by good strong T and K brackets, well bolted into the wall. And why not? Because I have lost the ability to climb up and work at the height of the Sirio. It was me who put that antenna up there, but that was years ago and now I cannot reach it. Here is a photo of my scaffolding tower which I previously used to reach the Sirio brackets... 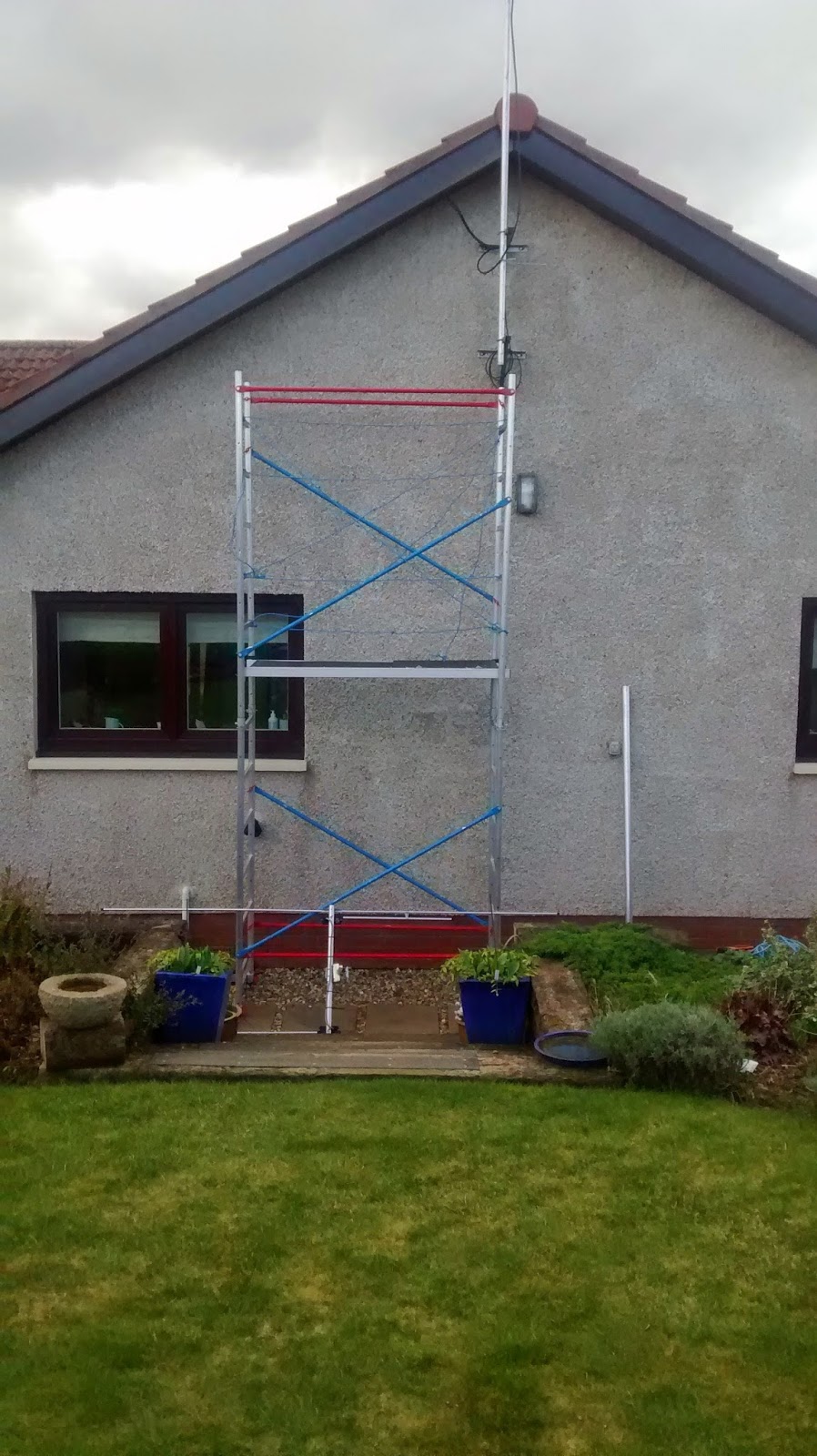 The scaffolding tower is a neat thing. In this picture the working platform is about two rungs (about a metre) lower than needed to reach the top bracket. But this week I could not work with the platform any higher. So basically I cannot work on this antenna any longer. I am toying with the idea of getting someone to move the top bracket down below the bottom one, and maybe then I could manage.

I do not know how I lost my head for heights. As it stands, the Diamond 6m beam is now about 50cm below the ridge tiles of the roof. That might do for meteor scatter or Sporadic E, but it rules out much tropo. It really ought to be up in the clear on the same mast as the Sirio, but just for now I cannot organise it.

In a bid to prove that it all worked, I used the Diamond to put out some calls on 6m meteor scatter. I worked 2E1IIP and GM6NX - both on tropo! (To be fair, they were not working anyone on meteor scatter either, so propagation was not great). We shall see how effective this proves to be. Either I need to get over my sudden loss of ability to work at heights, or I need to get someone in to change things. And then again maybe the wind will blow it all down anyway.

Or a second tilt-over mast?