I am a tutor and examiner for the UK amateur licence exams, but the local clubs cannot be bothered to allow me to run courses. But for a while I did and one candidate arrived here to do his morse familiarisation (me teaching someone morse is an interesting idea). He looked around the shack in amazement and said "why do you need five radios?".

Good point. That stumped me. There is an explanation of a sort, and more of that later. What he did not know was that I have four more in the shape of handhelds.

Before I had the current four I had Yaesu VX5 and 6s, (two band 144/430 MHz, and one had 50MHz as well, not that 50MHz was very useful) and a Wouxun KG-699E 70MHz one. Years ago I started with a Trio (Kenwood) TR2200 - 1 watt, weak, deaf and with hopeless Ni-Cad batteries. The TR-2200 was less of a hand portable and more of a "luggable": bigger and heavier than a Yaesu FT-817 but with just six (expensive) 144MHz crystal controlled frequencies. I also had a hand portable in the 1970s, the name of which escapes me. I think it was called a "Ken" or something. It was equally useless. It was not until the 1990s and the Yaesu VX range with lithium batteries that they became practical for me.

Lined up here like something out of a police drama, are the four suspects:- 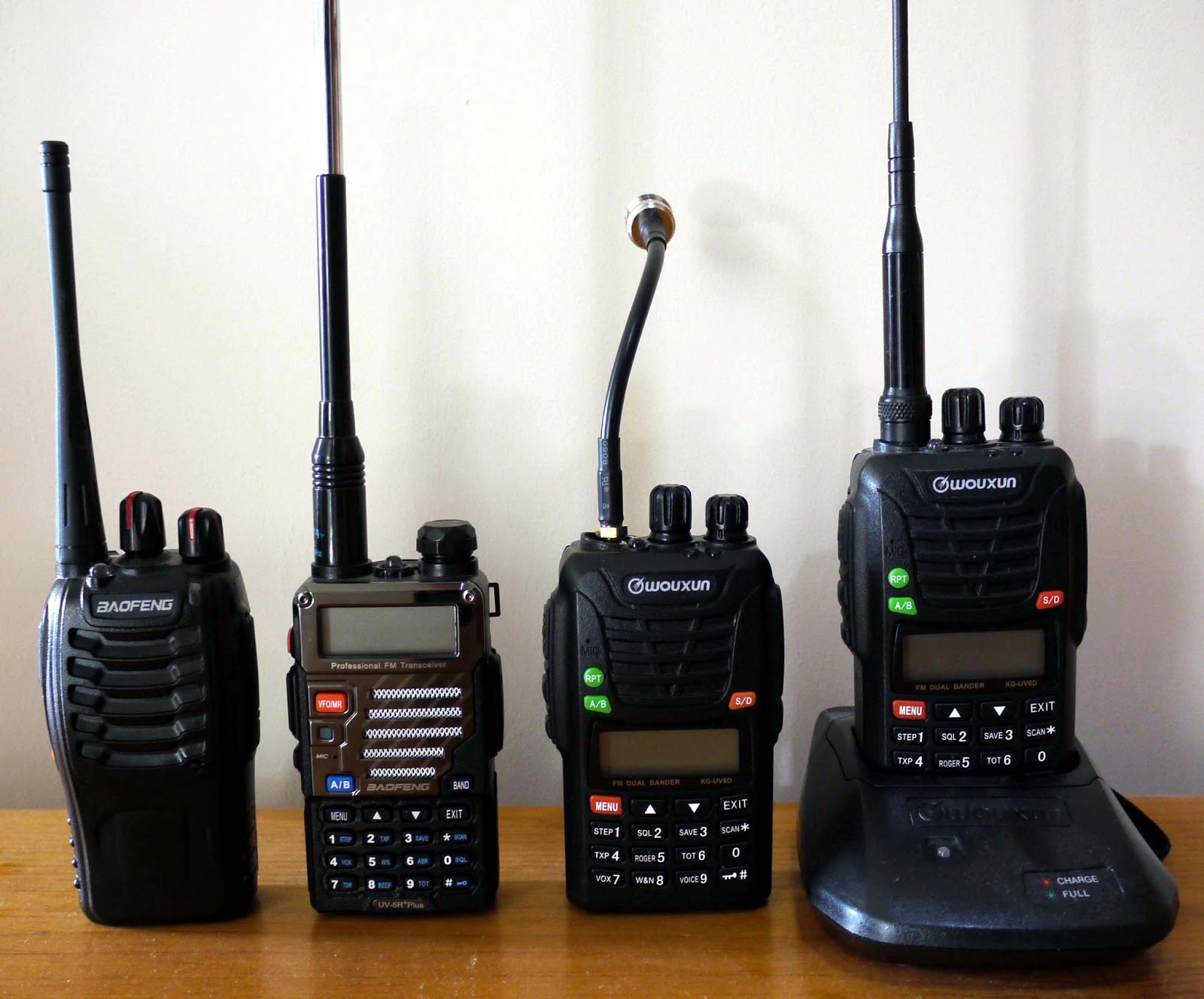 They are, from left to right, a Baofeng BF-888F, a Baofeng UV-5R+ Plus, and two (yes, two!)  Wouxun KG-UV6Ds. The Wouxun on the extreme right is in its desk charger.

The Baofengs are really a pair. Baofeng, now renamed Pofung (surprising move that), make radios that are ... value for money. In this case, £10 and £30. You might not expect much for that money, and not much is what you get. They are OK. In many ways I respect them more than the Yaesu VX5 and VX6 that went before them. The VX6 is now £200, and I cannot see what use increasing the price by a factor of 7 over the UV5-R+ brought me.

The 888 is a basic thing. It has no display and so you have to program it using a cable. There are 16 channels available to program in its 400-470 MHz range. It runs about 2 watts max (a little less maybe). It comes with a lousy antenna - but all these things do. First step in cheap handpoartable land - replace the antenna with a Nagoya one. All parts like the antenna, mics, power leads, spare batteries for cheap handhelds are easily and cheaply available from Hong Kong via eBay. Including must-have Nagoya antennas.

I bought that 888 to work with the UV-5R+ Plus (yes, that is plus,plus according to the front panel). It can also listen on most of the licence-free European PMR frequencies. Not all because it does not have the right steps, but most. Of course, it would not be legal to transmit on those frequencies with this rig as at 2W it is vastly over-powered. Also, it has that demon of things, a replaceable antenna. The PMR spec is for 500mW and fixed antennas - and PMR rigs cost four or fives times as much for a lower spec. As Granny Edgar used to say "The World is ill-divid".

Anyway, apparently some people use cheap rigs like this to tx on the PMR frequencies, but I know NOTHING about that. I can use it legally on the 70cm amateur band, and listen on PMR. My plan was to use it on the local GB3BE repeater, only to find that although BE gives its CTCSS code for a 118.8hz tone every time it identifies itself, it does not accept the tones. It only opens for a 1750hz toneburst which the 888 does not have. So that idea is out the window, and the world is even more ill-divid than I thought. But at £10 do I care? No. Apart from that issue (which is not the 888's fault, as it never claimed to have a toneburst) it works fine and for the money I have have had no problems.

The UV-5R+ was a replacement for the Yaesu VXs. I have a 12V back to replace the battery for mobile use, which is what I did with it until the Wouxuns arrived. I find that the only speaker/mics that sound at all good are the Wouxun branded ones, and that was what I used with it. I might say that I just listen when mobile, and rarely transmit.

The UV-5R is a good rig, runs about 5W max and has a frequency range of 136-174 and 400-480MHz. It has a 1750hz toneburst as well as the usual CTCSS and stuff. Unlike the 888, it has a display screen. As it has a display you can in theory program the memories by hand, but I suspect that using a computer makes it much easier. Some of the UV-5Rs I hear sound a bit strangled, so using a speaker/mic is a good idea. It also has an FM broadcast receiver built in which can be set to mute when the squelch opens on the ham side. Note: replace the antenna!

Not much to say about the UV5-R. I used it sometimes as a replacement shack rig when the main 2m FM rig went belly-up, and the (two) replacements also failed. Provided I used the Wouxun speaker mike, it was fine. One more thing it will do which the VX5s etc would not (after the dual FM/Ham radio trick!) is that I can program it for use in North America, as the Yaesus sold in Europe were limited to 144-146. And of course it will listen to some PMR channels.

The UV5-R+ is now the rig I use in my workshop over the garage where I build model trains, DCC control and interlocking, and the like.

Now, the two Wouxuns were bought separately, but always with the idea of reducing the handheld count by one. Which never happened.

That UV6D rig, rig "A", lasted a week before I dropped it on a concrete road surface and then the next day into our garden pond. When it came out of the pond it would not work, the display was blank and there was a leaf floating in water inside the display. That was maybe looking  bad for the rig, so I phoned the importers who told me that it was beyond redemption and I bought another one (rig "B").

Later I looked up the spec and Wouxun claimed that the UV6D can survive brief immersion. As they are intended to be used as site radios, so they are built to get wet (though dropping into a pond is not really expected, and it did take a few minutes for me to wade in and retrieve it). It does not claim to be "submersible", but maybe it would recover. So I carefully stored rig "A" without the battery in a airy place, and left it very much alone to see if it would dry out. After a couple of weeks I reconnected the battery and sounds came out but the display was dead (but it had dried out). After another couple of weeks I tried again and rig A came to life and has never looked back. The leaf dried out, turned to powder, and fell out again. I doubt if that was good for it in the long term, but we are where we are.

So I have two.

Rig A lives in the car and is now my mobile rig. That is probably a good thing as the little SMA-type antenna sockets do not take well to repeated unscrewing. I use a pigtail bought on eBay so when I want to take it out of the car I disconnect the PL-259 end. You can see the pigtail in the photo. I can take it out if I am leaving the car in an exposed place (not that car crime is a big issue out here). I have a 12V battery replacement back for it so it works on the car DC supply.

Rig B is a shack rig, used for portable, general signal generation and so forth. I don't need two, but I have two, so there you go. Two batteries is a handy arrangement.

Performance-wise the Wouxuns are a step above the Baofengs. Audio quality is excellent, but then again the Wouxun rigs are about £80 for this model. The receivers are more sensitve and the harmonic radiation is vastly better. I wouldn't connect a Baofeng to a linear amplifier but I have done with the Wouxuns. The display is clearer, the rig sits more comfortably in the hand, the controls work more smoothly. Man, the Wouxun is the handportable-lovers handportable. After the KG-699 (which was excellent) I had thought that the dual band UV6Ds might be less effective, but they just work fine.

The antenna supplied with the UV6D is not quite as bad as some, certainly better than the KG-699 one was, but I would replace it if you can. The usual Nagoya does for 2m and a Garex (now Spectrum) wavy-thing does for 4m. I also have a 4m bottom loaded whip which is quite good. In the car I need a diplexer and two antennas for both bands.

OK, so these rigs are value for money. They work. The programming software can be a pain. You can find it in various places such as the "409 Shop" website (I bought my first Wouxun KG-699 from 409 Shop and bought various bits over the years and they are reliable suppliers in my experience). The software gets tricky with the UV-5R+ which has various versions and not all the software works with all the rigs. Luckily I bought a generic programming lead with a disc enclosed which is for "UV5-R New" which works with mine. Trial and eror may be required. I believe that "Chirp" works well in Linux and it will program almost all of them.

When it comes to programming leads, quite a few of them have "fake" Prolific chips in them. The driver discs in the leads will work, until Prolific update the driver via Windows update. Naturally, Prolific are not keen on having their chips ripped off, so they have every right to update their software to a version which stops the fakes working. However, in Windows 7, at least, you can assign the old driver to a specific device (select "chose a driver from a list" and juggle them about). That will work until Prolific issue another update. Works for me anyway.

So, for all these rigs, they work well as far as they should for the money. They might even survive dropping onto concrete surfaces and into ponds (but I do not recommend it). They are programmable (fiddly) , you can find accessories cheaply, there are good speaker mics (well, Wouxuns mics anyway) and they take well to good antennas. What is to complain about? Not much.

But I think that four handhelds is enough.