A Coronal Mass Ejection shock wave reached earth in the early hours of St Patricks Day (17 March 2015). Nothing too special about that but they have been rare of late.

On 10m my daily routine of WSPR work has shown strong signals from VK and Spoadic E arriving from Europe. A bit of a surprise was hearing PU3WSF before mid day. 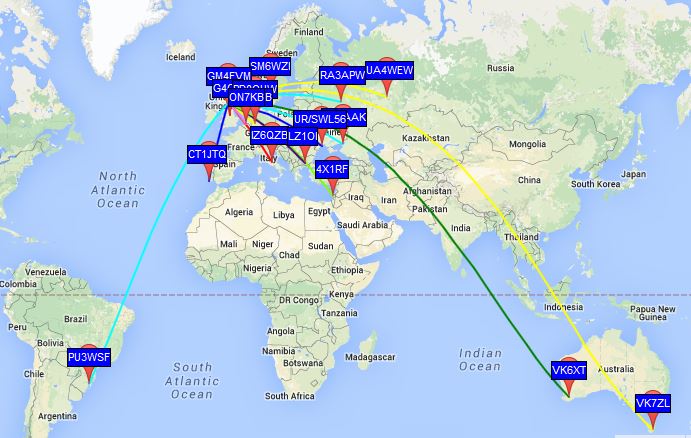 There was probably an HF blackout about 04:00 when the shock hit, and now we have the results on 10m. It depends how the stream of particles arriving from the Sun are polarised as to whether we will have an aurora or better conditions. If the "Bz component" is positive, not much will happen. Right now Bz is -2.9 and the solar wind speed is over 600, both necessary conditions for an aurora. But for me at 56 degree North and 2 West it usually takes a larger Bz number at, say, 15:00 up to midnight, for this to work.

However, we will see. The Sun has a habit of surprising us. Maybe the negative Bz will shoot up, maybe not. Maybe 2m will open with auroral signals, maybe 10m will have more sporadic E, maybe none of the above.

I picked a bad time to be off 6m if it does get good.