I mentioned that I visited the annual Galashiels Rally recently. It has been a few years since I went, and in the intervening period several old regulars can no longer attend. If we do not recruit new members to our ranks the amateur population around here will eventually fall to zero.

Still, there was still a fairly good crowd coming from a wide area. The stalls are always interesting, and I bought a few odds and ends ranging from used re-chargeable batteries to crocodile clips. Where do you go for things like that nowadays?

I will not be going back to the retailer who sold me two Panasonic AAA alkaline industrial cells when I asked for rechargeables. They are perfectly good batteries, and I will use them, but not what I asked for. The old AA rechargeable ones are fine though.

As usual you meet lots of people at such events. In fact, meeting people is the real purpose of going for me. One such was Bruce, GM4BDJ. Bruce gave me a photo, apparently taken by David GM3BFU (SK). It is dated 25 December 1945 and has written on it "H/F D/F", or high frequency direction finding (or Huff-Duff as it was called).

Now Huff-Duff was the cutting edge of technology in the late 1930s, though as World War 2 progressed it was steadily overhauled by VHF and UHF radar. Nevertheless, it has its uses when it came to finding clandestine transmitters or locating shipping traffic. Huff-Duff continued in use up to around the 1970s, before satellites and frequency-hopping rendered it more or less obsolete. Not completely obsolete mind you, but it is a lost art now when it comes to intelligence work.

Here is the photo Bruce kindly gave me, with some notes added by me. 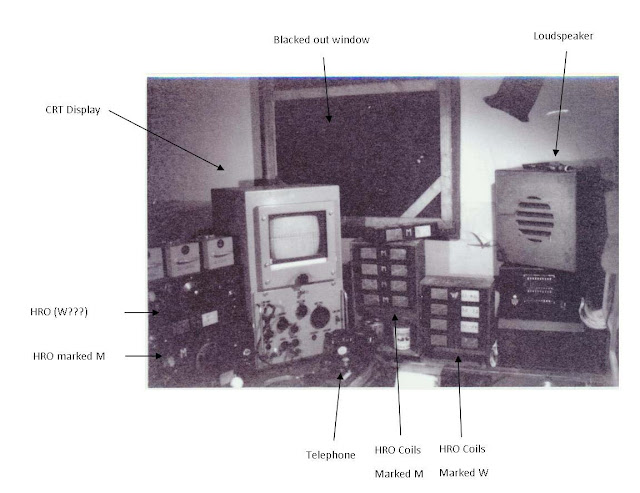 It is not very clear, and I have further affected it by scanning it in, but that is the only way to get it onto this blog.

On the left we can see two HRO receivers. Next to that is a Cathode Ray Tube display, which would have been pretty high tech and expensive at that stage. In the centre is a classic Bakelite telephone, two sets of HRO coils (marked M and W). To the right is a loudspeaker, oddly, as listening stations used headphones. Below the loudspeaker is something difficult to make out but it might be a small domestic radio. Note the blacked-out window and the wall construction (it seems to be a solid wall rendered with plain plaster).

To me, the presence of two HROs makes this look like a WW2 listening station. No amateur of that era would have had such things until they appeared on the surplus market. In any case, although some mysterious German amateur stations remained on the air during the War, in the UK amateur activity was officially forbidden. So I doubt if we are looking at someone's shack. This appears to be official premises.
The CRT display was described by someone as "looking like a home made oscilloscope". I very much doubt that it was home made, but rather an austerity "Supplied for the Public Service" type-model. I also doubt if it is an oscilloscope. Such a thing would have been confined to high-end RF research, not sitting beside a receiver in some out-station. Rather I think it is a display for direction finding (or some rudimentary radar). Early in WW2 "DF" (direction finding) equipment usually had mechanical readouts, but later CRT displays became more common. After all, although the theoretical idea of the CRT was the best part of 40 years old at the start of the War, the practical and widespread introduction of such exotic valves took the impetus of war to push forward (note the huge cost of pre-War television sets!).

So to my eye anyway, the H/F D/F comment on the back of the print looks to be correct. But how dare a serviceman (presumably) take a photo of such advanced equipment? Maybe by 25 December 1945 he thought it was all over. It wasn't over, and he was taking quite a risk with this photo.

Looking a bit more closely, there seems to be a morse key in front of the telephone. A listening station hardly needs a morse key - reception reports travelled out by land line which would surely have been telephone or telex. Huff-Duff stations would not normally have been taking down the content of messages. They would have been getting a bearing as part of a wider effort to get at least three or more bearings and thus triangulate onto the position of the transmitter. So why have a morse key, if that is what it is?

At the time, late in the War, Huff-Duff would still have been useful looking for "spies", survivors of downed aircraft, submarines, ships or any enemy traffic which would allow a location to be pin-pointed. Even intelligence coming from Allied spies and implanted agents had to be subjected to Huff-Duff to check that the station had not been captured by the enemy and moved to more friendly surroundings (from their point of view!).
It was apparently possible for good Huff-Duff operators to get a bearing on a signal as short as 10 seconds or less and get the information anyway down the line to HQ within a minute. There is no sign of the paper and writing equipment you would need to copy down the messages, so direction finding seems to be the game for this set-up. If there are headphones which we cannot see, some identification details of any messages would be included if possible, and a paper log kept.

Aside entirely from the mysteries of the display, the key, the role of the equipment, etc., the location seems particularly intriguing. There was a chain of "Y" stations which used Huff-Duff. Often they were in former pre-War GPO listening posts or in remote and hard to spot locations (hiding in plain sight). Often the vertical antennas were mounted in wooden mast, and the stations located in either wooden sheds or tanked underground. They were definitely not conspicuous or large. In the photo though there is a window, which has been blacked out. I doubt if a window would have been added to a purpose built station, just to black it out. Windows in buildings where you are figuring out the enemy's secrets are not common. So was this an existing building into which a listening post was installed?

There has been plenty written about the "Y" stations (you can look them up on Wikipedia). However, the exact methods used are still a mystery to me. I have read out goniometers and phased verticals, but the actual physical set up is still confusing to me. At this stage enter Roger, MI0WWB, who is interested in the former Y station at Gilnahirk. We can perhaps gain a little knowledge from Gilnahirk as it continued to operate into our lifetimes whereas most other stations disappeared after WW2. Roger wrote ...

So, we know there were well established stations like Gilnahirk, and we know that there were Voluntary Interceptors, but yet Bruce's photo looks to me like some intermediate arrangement. No amateur would have had such complex and modern equipment in their shack (as far as I know!). So is it a photo of a Y station? The substantial walls and the window make this look like a converted building, not the low profile look of a Y station. What is the key for? What is the display for?

The fact is we shall probably never know.

But it interests me all the same. I, like many of my generation, were amazed by F. W. Winterbottom's book, "The Ultra Secret" when it appeared in 1975. I went straight to the library and devoured it. The secret surrounded the cracking of the Enigma and other codes during WW2. The book has various flaws, but it opened the door to a secret which had been carefully held by the people involved since 1945. I think some of them might have frowned upon the photo we have seen taken on 25 December 1945. Nevertheless, Huff-Duff is not directly to do with code breaking. Vital in an indirect sense, and in a way we never understood until even more recently.

During the long periods before the high-level German codes were cracked, and during quite long periods whilst the code-breakers had to re-crack the codes, the Enigma and other codes were incomprehensible. All the signal intelligence community had to work on were the Huff-Duff and traffic volume reports. Even without the code, the signal intelligence experts learnt how to deduce lots of important information just from these reports. Of course, it was better when they could read the code, but there is a lot of information hidden inside the direction and traffic volumes.

Many wonder why the enigma secret was so well hidden when the basic technology was outdated at the end of the War. Well, in part it was to continue to hide this other secret. To this day, the modern equivalent of Huff-Duff is a major part of signals intelligence. When we hear from reports of "whistle blowers" that the security services are following billions of emails and phone calls, you can bet that they are not listening in to them all or reading every one. No, their first line of enquiry is, how much of this is there, and where is it coming from? Which is what someone sitting at that listening post was doing during World War 2.

So at this humble station, we know-not-where, the momentary lapse in security which took the photo, our memories of shadowy places like Gilnahirk, raise more questions than they answer. The questions may never be answered as the basic task of signals intelligence in finding out "how much and from where?" remains vital to this day.

Thanks to Bruce and Roger for their input.

We as radio enthusiasts look at the equipment, and we lose sight of the actual task at hand. This is very useful to the spooks. Maybe it is just as well if we never really know the answers.

Luckily, as I do not know how to put the question, the answer may remain shrouded for ever.