New mast up at last.

Firstly thanks to those of you who posted and e-mailed about the listening station featured last time. There may be more news on this in due course, but otherwise feel free to add anything more which strikes you.

Firstly I had better explain the background. After a couple of incidents I decided that the second mast I had mounted on T and K brackets on the gable end of the house was not practical for me any more. I am getting too old to go out there and climb, plus it is in the full blast of the wind and there are few days when I can work in the wind at height.

My main mast is a fine Tennamast, but I cannot add more antennas to it without exceeding the capacity of the rotator, or breaking the space constraints and overhanging next door's garden. Apart from that, I am limited to having antennas which are not visible from the road when the mast is cranked down, and adding more antennas would break that rule. I have broken it briefly from time to time, but really I want to be invisible from the road in front of the houses for most of the time.

Thus the second mast appeared almost as soon as the first one went up, to start with for a 4m vertical and then soon after for the 6m beam. This makes for great flexibility working 4m/6m openings, as I do. The two beams often point in different directions, and the inverse square law resolves most overloading issues (though I do have stub filters too). I am thinking of replacing the stub filters with lumped component filters, but a bit of space between the antennas always helps too.

So I wanted to have a tilt-over mast to replace the second pole. The object of the exercise was not to significantly enlarge the antenna farm, though someday a better 6m antenna than the HB9CV may be on the cards. Rather it is to get access to the antennas from the ground. The ground to the top of the ridge tiles is 5.2 metres. I drew up plans for various systems based on home-brew components. I have some winches, all the poles and so forth, but eventually it looked like a purpose-built solution would be stronger and simpler. Once I added up the cost of the bolts, brackets, hinges, concrete base, etc.,  and then I began to doubt my strength calculations, I moved on to the idea of square section inside square section (just like the Tennamast!). That would have brought the cost of changing everything else as well.

Eventually I settled for a simple aluminium tilt-over, crank-up mast by MM0CUG http://www.mm0cug.co.uk/ . Gary does a range of masts, the smallest (which is square section all along its length) is a 10m mast which is 5m when lowered. This is exactly what I needed as 5m, plus the rotator and poles, brings the HB9CV just over the ridge tiles. I then have the vertical on the top, but even that is not visible from the road. Gary has a 12m mast and various other options, such as steel construction. While steel would add more strength and also cost more, I have modest requirements for the antennas. This is, after all, my second mast. So I settled for 10m and aluminium, basically for cheapness, but really because that is all I need. My main mast is 7.2m fully extended, so this is potentially taller, but as I say, I doubt if I will extend it much, if at all.

I did flirt with the idea of another Tennamast, but that would be over-engineered and more expensive. Gary's mast bolts directly to the wall, needs no concrete base, but I suspect, is not as strong as a steel Tennamast. It is horses for courses, and there is no need to spend more money on a stronger mast when all I am doing is replacing a pole on a couple of wall brackets. Gary said his mast could take my mini-beam, so I have plenty of strength in reserve if I need it.

So anyway, it has taken this long to install partly because it arrived while I was away in Italy. We thought it was best to leave installing it until I was here. Gary delivers and installs his masts throughout the Britain and Ireland during runs at fixed dates, so I had to wait for the next delivery round. No problem there. It went up today in about an hour and a half. 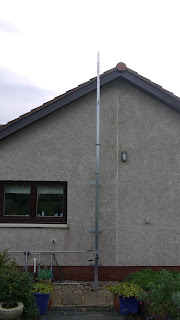 You can see that it is neater than the previous muddle of wires and poles. As expected, it sits at just the right height above the ridge tiles. Surprisingly, once the rotator and the beam are mounted up there, just as before, this will not be visible from the street in front of the house. I am basically keeping the same antennas and only altering the mast which supports them. Of course it can be cranked up to double the height, but that is not my intention. 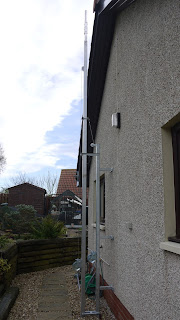 The fixing arrangements are entirely different from the Tennamast as shown in earlier posts. A length of square section is fixed to the wall using six bolts in the form of a large bracket. The mast itself, also square section with the extending section inside, is hinged to the bracket by a single pin, and retained by a clamp with a removable pin. Remove the clamp pin and the mast tilts, supported by steel wire and one winch. The other winch raises the inner section. Simple really. 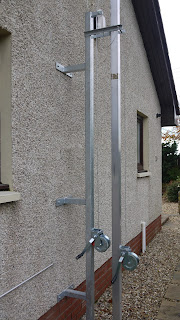 It doesn't look quite as elegant as some other masts, but it seems to work.
The winches are very strong for my purposes, and probably standard for larger masts too.

Now that it is in place I can think about getting the HB9CV and the 2m vertical on the top. I may leave that set-up, with the Conrad TV rotator, in place until the Spring when I might be able to get up a better 6m antenna and the Yaesu rotator up instead.

So, lets see how it goes. It looks like it may rattle in the wind, like any extending mast. Having said that, I can see how a couple of wedges would lock it up and prevent that.

All I need to do now is get the antennas and rotator installed, plus the co-ax extended, ...