PC crashed, PSU blew, and a core melt-down for me.

It's been a funny old month - and it is not quite over yet.

On Friday (it all happened on Friday!) the PC crashed. Finally, after loading more and more on to it, it just stopped. Nothing fatal of course, it just turned itself off.

My fault really as I have been loading more and more onto it. At one stage in the past I had two computers, one for what would now be the Internet programmes, and the other, faster one, ran the Flex SDR and data modes. This would have been fine had not the best faster one made slight but annoying noise on VHF. My numerous attempt to solve this failed.

Usually noise gets out of the computer via the connecting cables. This is something I am well versed in trying to deal with. I have established that some cables are reliable, and ferrite rings and clips are very effective. But with the fastest one nothing I changed outside the computer seemed to matter, and even the cables inside could not be silenced. It seems as if the noise is coming off the motherboard itself, though how it gets out of the computer case I cannot find.

So, I went over to one quiet computer driving two monitors. One monitor covers the Internet and email, and the other shows the data modes. This looks like two computers but of course all the processing falls on just one. I have worked like this for a couple of years.

Constantly adding work to this computer finally pushed it over the edge. I should have realised, because I was watching the processor load climbing higher, but somehow I kept putting off doing something. I seem to be good at that.

Nothing seems to have been harmed, though of course it might have been. In the past I have broken disc drives in crashes like this.

In the meantime I dug out my old 3ele/4ele 6m/4m dual band yagi. This was stored in the garage for some undefined portable operation at some distant future date. It was a simple matter to make a 3 element 6m beam out of this and it seems to work well. It will do for a few days and it immediately proved to be more effective than the Diamond.

So I have been busy on 6m. The set-up is that the 6m linear shares a 50amp switching power supply with the 2m linear. This does not matter as they are both connected to the same rig and therefore cannot transmit at the same time. The PSU is a MyDel MP50SWIII, but you may recognise it as something else, as it appears under various brands in different markets.

Having had some success  on 6m for a day, I noticed the PSU making a noise. This was a rattling type noise, which became louder as the current drawn rose. This PSU has been making noises for some time, which did seem odd. I had intended to have a look inside to see if I could work out what was happening. I sat watching the ammeter at 32amps pondering the amplifier efficiency and maybe the rf power meter could be wrong, when the power supply blew.

Current had fallen to 6 amps, the noise stopped and I quickly turned it off. Quickly in my terms, but the damage was done.

I am aware that they can fail with a spike of voltage or current. I disconnected the linears and nothing changed, so it does appear to be the power supply at fault rather than the linears. I hope that the linears are not damaged.


In an attempt to test the linears, I swapped things round and put in an Amperor 25amp supply instead. Both linears seemed to be working up to about the 100W output that was all I would risk.I do not want to blow something else.

I should have had some other 50 amp power supply to back up this one. Yes, I can juggle about my linears and get back to almost full power on all bands, but that is not really the point.  Any of the 25amp PSUs can fail and I have a spare. But if this one fails, 6m and 2m output drops considerably. You might think that the rig runs at 100W for 6m and 50W for 2m and that should surely be enough. Yes, when it comes to SSB that is true.  But for the data modes I use so much, the rigs simply cannot supply that sort of power on a prolonged basis.

I have linears, not so much to raise my power overall, but to provide a buffer to allow the same power to run on the high duty cycles of data modes. I do not run legal maximum on VHF: generally I only send 100 - 200 watts from the linears, from which you need to subtract line losses. On HF, I run a fraction of that.

Hey, I can live with this. Just find a new power supply and then fix this one. Then I will have a spare. In fact, I have a Sharman 23amp one which has died and been fixed twice. But during the downtime things are far from perfect. I think I should have thought that the strange sound coming from the PSU was more important than I did.

Why does a power supply make a strange sound? I had some inkling that this was coming and I did nothing about it.

The new addition to the skyline, the temporary 3 element 6m beam is working well. 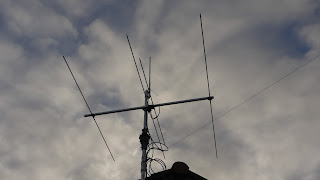 Note the 4m element, which is carried over from its previous life as a dual band beam - it was too difficult to take off! Also, lots of spare coax for the yet-to-arrive 5 element.

I was surprised to have a call from Bo, OZ1DJJ, whilst beaming West on 6m meteor scatter. At the same time I was doing all sorts of domestic things and I committed the cardinal sin in amateur radio or replying to the wrong callsign (OZ1DZZ).

Thanks to David GM4JJJ for pointing this out. David saw that Bo was calling me on the KST chat page to tell me I had made a typo. I had indeed made a typo.

I should explain that I am not on KST. Yes, it would have alerted me to using the wrong callsign, but following KST just adds one more layer of complexity to my already crowded life. KST is both a solution to the complexity problem, and a cause of more complexity.

I suddenly realised that I was overdoing it. There were signs that I was trying to absorb too much information, process too many operations at once, and generally, trying to produce too much power from limited resources.

I should have seen the warning signs. I should have closed a few brain programmes and let my central processor cool down. Instead I battled on and got my callsigns mixed up.

Not that I actually mixed the callsigns up, I just did not think about it because I was thinking about something else at the time. Not a deliberate act, a loss of concentration. Trying to do too many things at once.

Is this sounding familiar? Did I ignore the signs, just as I did with the PC and the PSU, that I am overcooking everything? Yes probably.

I am not about to give up radio, but I do need a reminder sometimes that I tend to over-complicate everything, to the point of overload. You will all be surprised to hear that.

The PC crashed and the PSU blew after I lost track of that QSO, but on the same day. So I cannot say that there was some deep spiritual connection between all this, the warnings of which I had ignored. But it all shows that everything has its limit.

This is only a hobby. It can become an all-consuming passion which fills the mind, empties the wallet and causes you to forget what is important in life.

I am off to let my internal fan reduce the temperature of my overheating regulators.

(IRONY WARNING): There must be a lesson in all this, but maybe I will just ignore it. That strategy has worked for me so far.