This mast has turned out to be quite a struggle. It has needed a lot of tinkering, tightening and adjusting. More of that later, no doubt. But I will get there eventually. It may be built down to a price, but I still reckon it is the best solution for me right now.

Actually putting an antenna on it turned into farce, of course. The idea was simple. Just transfer the rotator and 6m antenna which used to be on the temporary mast onto the new one. Then put the Moonraker 6m/2m/70cms vertical on top. Job done. Well, for course it was not like that.

I have written a complete report, but I will spare you the details. Trying to get it done before the RSGB 6m UK Activity Contest was a target of course. An excellent test. Two days work, in freezing conditions, rain, wind. I am not asking for sympathy. You can just be amazed by my pig-headedness.

I should say that the TV rotator can only take a 35mm pole, so everything was organised around that fact.

It took a day to get the previous set-up onto the mast and get a photo of it before I put the mast up. 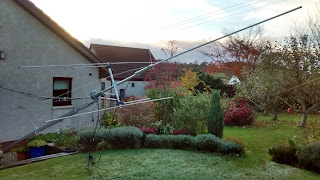 It is not much of a photo due to the lack of light, but note the frost on the ground. I had just lined the HB9CV with North, by turning rotator and lining it up level with the ground with a small correction for the fact that the house is a few degrees off East-West.

So I put the mast up and the rotator failed.

At first I thought it was the cable, but more work proved it had just given up. TV rotators are not made for a long life. They only fail when you rely on them.

It did not take long to see that I had to give up the plan to use the previous set-up until next Spring, when I planned to put up my Yaesu rotator and a better 6m antenna. So I had to face doing all the work again, but this time with the Yaesu rotator, 6-core cable, and a 50mm pole above the rotator. That should be OK, as the vertical was bought to fit 50mm pole. Plus, all the other kit was in the garage ready, waiting for Spring.

After another day, I was standing in the gathering gloom, with frozen ground under my frozen feet, almost ready with the new set-up. Just time to fit the vertical before it gets dark.

Then I discovered that the vertical does not fit a 50mm pole. Nothing else for it, I had to dig out my Diamond X-30. Half the length of the tri-band vertical, and as it turned out, it works better too. And I fitted it, helped by the torch on my mobile phone. 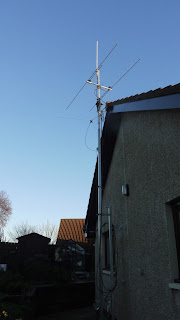 It looks the same. But everything has been done twice. Two lots of cable pulled through, and one pulled back. Two verticals fitted, one removed, two sets of waterproofing PL259 plugs and sockets done, one pulled apart. Two beams fitted and lined up, one removed again.

Another hour's work in the house got the rotator controller as far as my desk and I was ready for the contest.

This was one of the worst contests I have ever listened to. I only heard two stations, and neither was calling CQ. Total result = NIL.

Well, it is not all bad. After the contest I worked DM2ECM on 6m meteor scatter MSK144. More about MSK144 later. But it is all working now, and I can turn the rotator.

So what is this long tale meant to convey? Well, that I am a determined old toad, ready to get cold and wet. It shows that this hobby can drive normally sensible people to do mad things in the winter, and then do them again the next day.

MSHV has been updated to include the new mode.

There are other new modes for Earth-Moon-Earth and other propagation methods too.

At the moment the latest modes are still in the process of completing development, and new versions are being issued as bugs are identified.

I do not have space here to say more, so I will leave it for later to cover it in more detail. But it is clear now that things we used to think were really difficult, like meteor scatter, have been revolutionised. This revolution continues. Nowadays the average amateur with moderate power and fairly simple antennas can communicate efficiently using the WSJT-X suite, whether it be in HF with JT65, or EME with QRA64.

The days of using tape recorders to speed up morse are long gone, the days of building massive linears and huge antenna arrays are coming to an end. WSJT-X and its clones are remarkable.
=======================================
Scottish Borders Council, our municipality, has started a programme of replacing sodium street light elements with LEDs. This has obvious advantages for the council. The new lights have longer lives, need to be maintained less often, produce (almost) white light, and consume a lot less energy for a given light output.

For an amateur, the prospect of have a street full of LEDs outside the shack is a bit scary. That is why I asked the maintenance team about two months ago if we were due to get the new fittings. No, they replied, they are busy elsewhere and it would be a year or more before the change-over happened.

Thus it came as a complete surprise when they fitted the new lights, completing the whole street using the existing lamp standards in a day. 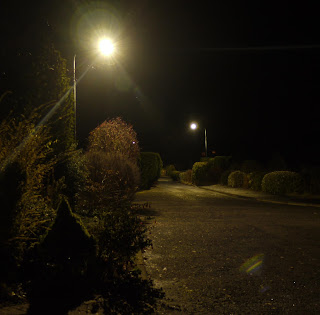 This photo shows the street now looking like daylight. The new lights are VERY effective.

I suspect that they used some of the reduction in power consumption to provide some headroom to raise the light output level too.

I was in fear of the consequences for noise on my radio. I have a very dim view of LEDs in general. We have very few, and those that we do have are either far away from the shack or rarely used at the same time as the radio. So having a street-full outside my control was a worry.

I need not have been concerned. There may be a slight increase in background noise. I cannot measure it, so it must be very low. I can cope with that. There are no terrible consequences on the bands that I use. Or at least none that I have found yet, and I have looked.

Even the sodium lights caused noise, but only for ten or fifteen minutes when they were starting up each night. This actually seemed to be better.

Lets hope that I see a reduction in my local taxes to pass on the savings to me. I am not as troubled by noise as I thought I might be at this stage.

I know that LEDs need not be a problem if they are properly installed. It is good to find some that are.