The joys of radio. Intercontinental, Es, aurora and just a bit of fun.

Radio horizons, good old fashioned radio, and a timely aurora.
=================
When I get obsessed about things I do a lot of thinking on my walk. On my walk I noticed that the alpacas have been shorn again.

You would think they might be getting cold at this time of year, though I believe that they can get three fleeces off them, so there must be a late sheering every year. They must be capable of bearing a lot of cold, up in the Andes. Erm, time to think of working South America? You have to admit, my mind works in predictable ways.

Meanwhile I have been flapping about my radio horizon.

David, GM4JJJ, helpfully sent along a radio horizon for this QTH from Radio Scout. I still have my physical horizon from the HeyWhatsThat site - if you go to HeyWhatsThat site there are also tools you can your for line of site paths and so forth.

The lower line is zero degrees elevation, and the higher one is one degree elevation. What it shows is what we knew, I have a hill in the way to the East and South. David's radio horizon showed me that I need 3.25 degrees elevation to get over the larger parts of it.

Which just confirms what evidence already shows, that I cannot get a tropo enhanced signal to the East and South, but I can get out that way during ducting, sporadic E and meteor scatter. In fact I can get out to distances which the calculations suggest require zero degree elevations, but not on tropo.

All this looking at horizon charts confirms one thing in my mind - if I want to get out to the South and South East, especially during VHF contests, I need to go portable on top of the hills, rather than sitting here expecting the hills to vanish in front of my radio signal. We shall see if that happens or not.
=====================
When I get into a tizz about something like the horizon issue, I often think that just going and working some stations will help.

This has to be the basis of what I do. I still get a thrill from sending out a CQ and sitting waiting to see if anyone comes back. I still like collecting a new square in Guatemala on 12 metres (erm, that doesn't happen often I must say) or just yakking to someone about stuff. Stuff, the great subject for debate in amateur radio. Like why has Yaesu introduced a new microphone at £595?

I have been noticing that North South paths were good on 10m in the early afternoon, and on 11 October I worked this lot 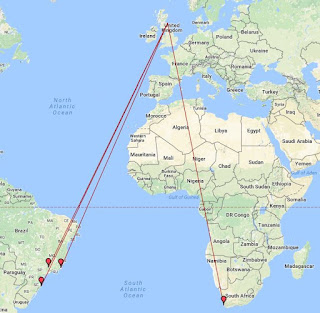 A bit of DX is good for the soul. Not content with that I came back the next day ... 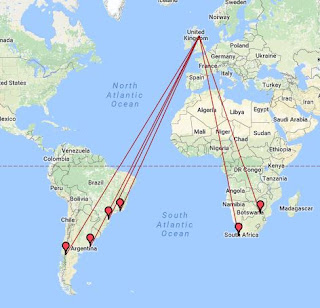 Now I know that the Solar Flux Index had risen to just over 100 for the first time in ages, and you cannot do that every day, but it shows what you can do if everything works out. Yes, the Solar Cycle is on the way down and likely to stay that way for years to come. But that does not mean that there are not pickings to be had, even on 10m. Into alpaca areas too.
====================
During this period, SolarHam had been predicting the arrival of a coronal mass ejection. "Weak" was how it was described, possibly making "a glancing blow" on the Earth. In due course it did this on 13th October:- 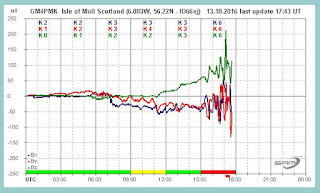 I know that raised solar activity, as well as causing an Aurora, can cause enhanced Es. So I was ready for some life to arise from a different direction on 10m, which it duly did early 13th ... 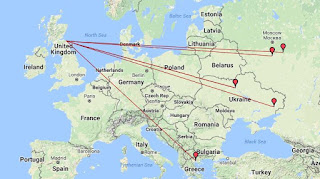 Now you can never convince me that Es is not encouraged by solar activity, and that seems to be all the proof I need. But then we DID have an aurora, and associated Es before, and Auroral Es afterwards.

Bundling all the Es and aurora results together I had this outcome on 6m:- 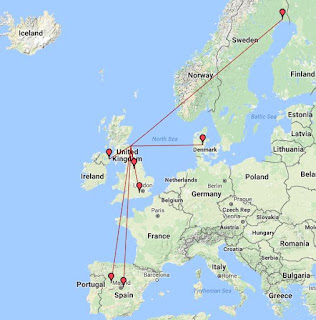 Even lowly old 4 metres got a look in during the aurora:- 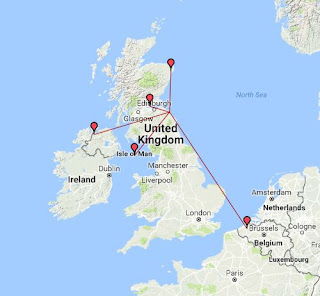 I did hear a couple of LAs and an EI on CW, but I was happy with 4 DXCC on SSB (though the GM3UAG QSO was me sending SSB and him replying on CW). All approaches welcome.

Now this is the joy of amateur radio for me. I can get a kick out of stalking Brazil and South Africa stations on 10m F layer, switch to Russia and Ukraine ones on Es, take in some aurora and auroral Es all around me.

I feel cheered up. So what if I am beaming at a hillside? This is the type of contest I want to win. (before you all say, I approve of contests, just not the ones where I am beaming into Ayton Hill).

And joy of joys, most of these people I worked on VHF I have encountered before. GI4DOH on 6m aurora. GM4JJJ also via the aurora. Both well known, but first time on the aurora for both. ON7EQ for yet another QSO on 4m, having now worked him on tropo ducting, meteor scatter and twice on aurora. Jean-Jacques is the proof that what is impossible on tropo can be done lots of other ways. Gerry, GI4OWA, is now a front runner for being the first aurora contact each time and therefore my new beacon in the West. I even managed to see, but not work, IU1DZZ on 10m Es. GD3YEO was a completely new one for me, though I have worked GD from here before, never on aurora until now.

It is a joy. And what a handy and timely relief from my gloom.

If in doubt, turn on the rig and work someone.