Some very nice October Es, plus the "lure of HF DX".

I find it hard to decide how to report Es this year.

Last year I rambled on at great length about how, despite the RSGB Propagation News predictions based on the meanderings of the Jet Stream, it was clear to me that solar activity was the main driver in pushing the Es layer into operation at this time of year. I took readings over one month and there was a very clear correlation between the Es events and what I call "solar activity short of an aurora".

I don't wish to keep going on about it. Let us just say that this past few days have shown it again. Whilst the RSGB predictions said nothing about Es, I noted the imminent arrival of two (positive polarity) coronal holes. Everybody knows by now that if there is no aurora then there is often Es. By this I mean normal Es and not just auroral Es, which is a different phenomenon which sometimes occurs immediately after an aurora.

I think that the Jet Stream stuff is a delusion, at least at this time of year.

Of course it all depends what I mean by "solar activity short of an aurora". Certainly I am not suggesting that this has much predictive value. You can see the general pattern, but cause and effect is hard to prove. Nevertheless, I was expecting Es after this event and it did happen. No doubt, looking back, the RSGB will find some swirl in the Jet Stream which explains all this, but that does not justify their pseudo-scientific predictions in my view.

So, anyway, it has been good for Es. There was several short spells of aurora, including me hearing LA6JO, GM4VVX and GB3NGI via aurora. But no contact from here anyway. The compensation of several days of Es was more than enough to make up for the lack of aurora.

OK, so these Es openings are not much compared with summertime propagation. But for October they were pretty good. The K number was ranging from 5 to 6 between 30 September and 2 October. As I write it is has gone back down to 3. There may still be some more fun to be had before this is over. As I write 10m WSPR is back in action with 4 different Italian stations coming in and OZ1IT hearing me.

So what is to learn from all this? Well my experience, as far as it goes, is that positive polarity coronal holes can indeed cause a geomagnetic storm, in this case quite a big one. But in radio terms, they rarely seem to produce much of a chance for an aurora. As you might expect as negative polarity storms tend to provoke a greater reaction on Earth, those storms are generally better from our point of view. On the other hand, an autumn or winter Es session after a positive polarity event is very nice and well worth looking out for, especially if it affects 6m and above.
======================
I once had a long conversation with the then current RSGB President about licensing and amateur exams. He said that UK Foundation licensees should have full access to HF because it was the "lure of HF DX" which brought them into the hobby. Hmmm. He was an HF DXer himself. He may be right, but that is not a reason to give Foundation licensees full access to all bands in my book.

Anyway, I think I do know what he means about the "lure of HF DX". Am I lured by the prospect of HF DX?

I mentioned recently about working DX on 40m. I worked AK1P and LU1WI on 26 September. The recent Es openings on 10m allowed me to be around when the band opened into South America. It also means that stations were around there to work in their Spring Es. 1 October brought LU1FNR (FF98 11186km) and PP1WW (GG99 9248). Not bad for a 5/8th wave vertical dipole and a barefoot FT450 at my end.

I may be a VHF operator at heart, but there is still real ham blood running through my veins.  I like a bit of dxing from time to time. It also shows that even in a period when the sunspot number is low, whatever ionisation there is in the F layer is strongest nearer the equator and therefore North-South paths may still be workable. I shall keep my eye out for that.

As for the licence debate - if a Foundation licence holder could work South America on 10m and 40m as I did, I think they would feel well chuffed. That sounds like a reason for NOT giving them access to 20m. Let them work for more privileges, just as I did. I say "Keep 20m access for a higher licence grade". Just my thoughts though ...
=======================
No picture this time so what about a railway photo from Italy? 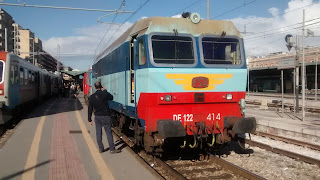 This was taken at Bari. Was it only two weeks ago I was in Milano Centrale station? Now there is a place worth a visit for anyone interested in architecture.

=======================
The weather chart shows some signs of increased barometric pressure over the next few days. It will be interesting to see if there is any tropospheric enhancement. This is often a good time of year for ducts to form across the North Sea between here and Sweden, Denmark, Germany and the Netherlands.

I will be looking for that, and increased meteor scatter activity as the season progresses.