It might appear that as I have a nice rig I must have money to spread around. Yes, I do quite well and I am thankful for that. I do not earn much of it. Instead I avoid spending on things that I think I can manage myself, and save the rest for nice things.

A bit of penny pinching brought the Yaesu FT-2900 into the shack. "Proper Yaesu. None of that Chinese junk" someone said. It says underneath it "Made in China". I hadn't the heart to tell him.

Why should I care which part of the world it comes from, so long as it works? Which it does after a fashion. I do not like it, I just cannot justify spending money on a squalk box which only serves to work three people.

I am not anti-social, there really are only three people who I can regularly work on 2m FM. Regularly means once a month. Hard as I try, three people worked each month is all 2m FM does for me.

Now discontinued, this model was one of those rigs with a huge heatsink built onto the back, in an attempt to avoid the expense of a fan (what, 50p?). "Does not need a fan as it has a large heatsink" the blurb said, but it does need a fan anyway. I should have known: my FT-1900 also used to run hot even though it had a lower maximum power.

I feel guilty that I sold that FT-1900 to someone and it blew up shortly afterwards.

It need not be so. My Anytone 888 has a passive heatsink and no fan but it runs dead cool. But of course it is none of your "Proper Yaesu". It is unashamed of being made in China.

So you can get the idea. I want it to work, and I am not so bothered about where it came from. Let us say that "value for money" has clearly been a big part in my buying decisions for FM rigs.

The biggest bugbear I have with the FT-2900, apart from the heat, is that it is utterly fiendish to progamme channels into it. It takes hours, and you are not very sure if what you have done is correct. And I had to use the "memory bank link scan" to do what I wanted to do and then if the scan stopped in one bank you could not tune to the other bank ... dreadful.

I set my heart on some programming software, but this ran up against my skinflint nature. Spend £50 to a certain company for their product! Shudder. Too much. So I struggled on until I could have no more of it. Well, I used the FT-817 on 2m FM for a while and it taught me that a proper progamming suite (in that case the ancient but free "817commander") was a big plus. I could organise leaving out my local repeater (3km away), install the one I use (30km away), screen out the ones I can hear every day (50 to 60km) and listen to the one I use as a propagation predictor (80km). And I can change them at any time. Simples.

So I bought a lead with a chip and USB plug on one end and a mic plug on the other. Yes, I could have made that myself but at £4.36, post paid, from Shenzen, why bother? Ordered on 25 August, it was due here on 12 September to 6 October. Nice wide range of delivery there then. It arrived, not with a Chinese but with a Netherlands stamp on it, on 10 September.

Next step, the free programming software CHIRP. I have used CHIRP successfully on several handhelds and it is great. It claimed that the latest version worked on the FT-2900. It didn't work, or more accurately I could not get it to work. It wouldn't read the data from the rig and I could not find out why. I chased all over the shop, trying drivers (but the lead seemed to work) fiddled with CHIRP settings, and got nowhere. I now think that I could not understand the way to set up the rig for cloning. But without that information I was lost.

There is also the issue that the well known company appear to be introducing leads which do not work with CHIRP, and software which only works with their leads. I have already bought a cheap lead, and this is amateur radio. We do not mind if somebody finds his own solution to part of the problem. Or we shouldn't mind.

At this stage I might have dipped into my wallet and paid £50 or so to get a nice bit of software and lead in a neat box. £50 because no local shop seemed to stock it and I would have had to order it from USA, from which the postage is half the cost of the kit. But no, I wanted my bargain.

So I decided to give G4HFQ a try. He sells programming software which does everything which CHIRP might do but it has comprehensive instructions and explanations, which seems to be missing from CHIRP.

G4HFQ allows you to download and try his software for 2 weeks in "download only" mode. You can use anybody's lead as he does not supply them. He explains how to build your own lead. Then if it works you can pay him for a full version of the software and he sends you a code to unlock the limitations.

This is more like it. Cheap lead and cheap software? Yes! I downloaded the 2900 software and it worked perfectly with the rig in download mode. After buying the licence it works perfectly in upload too. The instructions are crystal clear and go sequentially as you work through them.

On the PC it looks like most of them do, with various screens for different functions, and one large sheet for all the memory options ... 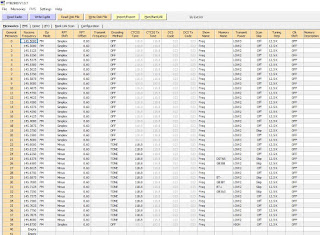 Now that I can see what I am doing I no longer need to use to cumbersome "Memory Bank Link Scan".

The total cost to me was £4.36 for the lead and £14.33 for the software licence. As G4HFQ's site is priced in dollars it would have been cheaper for me before the BREXIT vote. Ah well. Still, £18.69 is a much better price than £50 or so, plus I engaged a bit of brain power to get it to work.

In the hobby you can always get someone to pack things together into a neat bag and by paying them more you get some sort of guarantee that everything will work together. But I have saved enough money to do something else too, and the risk of it not working opens the door to me to do some more fiddling with chips and leads, which I love anyway. In some way buying bits which work together actually spoils the enjoyment of trying to solve the problems I expect to have. I suppose trying to get CHIRP to work with the 2900 did give me a bit of a brain-teaser.
====================
In a dark corner of the FVM shack lies the 70cm FM department. The re-emergence of the single band FT-2900 means that some other rig needs to be used to access our local 70cms repeater GB3BE. Not that anyone ever uses that repeater, but I am ready to pounce if anyone does.

The rig used for 70cms is now another of my cheese-paring specials. It is my trusty Baofeng 888, costing £8 from China on eBay. OK, it has no display, no VFO, and only 16 pre-installed channels. It cannot scan these channels, and it has no tone burst, though it can produce CTCSS tones. It runs about 5 watts on "UHF". I pre-programmed the channels using CHIRP, with the repeater, the 70cms calling frequency and a working channel.

It sits in a bit of a shelf next to a power supply unit, beside the phone and generally out of sight. I use a speaker mike, and I have never yet had a reason to change the channel. Antenna is the 1/2 wave on the FT-2900 which the 888 shares via a duplexer. On 70cms it is "a colinear" - gee, what sophistication.

I needed to use flash to take a picture down there of course, and it shows up the general starkness of the situation. Out of sight and often out of mind. But crucially it works.

If the FT-2900 had been a decent rig it would have 70cms on it. But I was saving cash when I bought it. So the combined cost of the 2900 and the 888 comes nowhere near the cost of a dual band FM mobile. I am a happy camper.

The only drawback of the 888 is that it does not have the 1750hz toneburst needed to open the BE repeater. BE may say it responds to CTCSS, but it doesn't. Not worth building a tone burst as no doubt as soon as I do BE will go over to CTCSS. So I recorded a 1750hz tone which I play through the 888's speaker mic. Tight? Me? Well, that is the secret to me being able to afford all the other stuff I have. And also how I can afford to go to Italy (on the train to keep it cheap of course).

I propose a toast to the £8 ham radio. Long may cheapies keep us going. Bravo Chinese sites on eBay.

Hail to everyone who allows me to save on the run of the mill stuff and spend my savings on useful things.