When I worked for a large government agency in Edinburgh I had to do the accounts and run the personnel section. One group of staff were organising a new computer system which would save our bacon by reducing the staff numbers and save the money we would not have in future years.

All they did was sit in an office in front of screens. Their time sheets just said ...

Every week. I just had to accept that this justified their salaries.

And so, since VQLog arrived at GM4FVM, all that I have been doing is ...

What a boring job this turned out to be. I just hope I get as many efficiency benefits as my former colleagues used to promise.

All my 2m contacts from here are now in the log, apart from some rather tedious contest contacts. Almost no FM QSOs get logged here anyway. All the 4m contacts back to 2 October 2015 (don't ask) are also in plus all the new DXCC entities and squares back to 2009. All the 6m contacts go back to 1 April 2016, with all new countries as they arose, back to 2009. I have not yet formally organised 6m squares. And as for HF, just a few that caught my attention. It is not hard to see where my heart is. Many of the HF ones are interesting, but I have to set some priorities or this would go on forever. Also in are almost all the contacts confirmed by paper QSL cards.

What I really needed to do was get everything that mattered into VQLog, and the paper record will remain for the things I have not transferred in.

So most of August's contacts were entered live and it all went well except for one session.

Let us see what happened in August then.

Before the 14th there was a Sporadic E ("Es") opening from here almost every day, each of which was over 1000km, and on the day when there was no Es opening I worked into OZ on 4 metres meteor scatter. I would have to say that it really was very good stuff.

You can click on the images to enlarge if necessary. 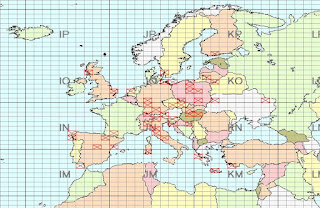 Then came 14 August when 6m opened again across the Atlantic. It was a good enough VHF day for me to do a proper map .. 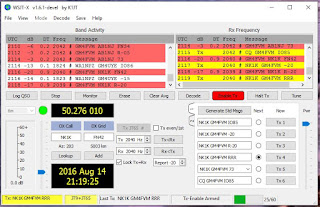 I was pleased that I was around for a second trans-Atlantic opening on 6m in 2016, and two new stations were worked as well. The repaired 6m linear worked well at 125 watts. I was in touch with AB1NJ who thought this was the best opening of the year from his end, but it was second best from here. Es is very selective.

Not only was 14 August the best opening of the month, but 14 August marked the decline in Es. After that there were 6 days of the month with nothing heard on Es at all. The openings which did occur were shorter and more limited in their scope. 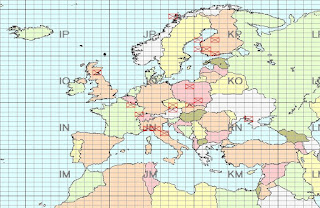 Although the second half of the month was very nice, it is immediately apparent that the steam has gone out of Es for now. Not that this means the end of it. As I found out pursuing another question, I have worked more Es in January than in September, but it can happen anytime.

As the Es fades each year I tend to turn to meteor scatter. MS also worked quite well during August, with the Perseids shower doing very well for me. A new country on 4m was provided by the Andorra expedition C37MS, which I had worked earlier on 6m Es. 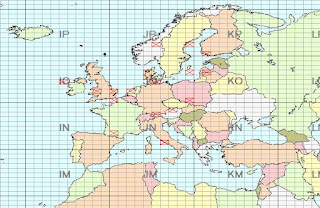 IZ0MIT is showing up as a meter scatter QSO on 6m, but to be accurate it was really mostly Es with a bit of MS thrown in.

So that is it for the month of August. Sorry that shortage of time has force me to cover the whole month in one page. However, it shows what a difference there was between the first half and the second half of August. August started with Es every day, and ended with it tailing away. Good old reliable meteor scatter filled in the gaps.

The one aspect where I did not get on with VQLog was in the RSGB 4m UKAC contest on 30 August. I only had ten contacts, but keeping track of the serial numbers when I heard stations but did not work them was tricky. I need a good record of who I have worked already. No doubt VQLog can help me, it can certainly do sequential serial numbers, but I am not sure I want that type of help. Maybe contests are just better done on paper, for me anyway.

Or maybe I just do not love contests, although I see their benefits and I do come on the bands specifically for them.

We shall see as time goes on.