I am back in the country again.

I have been in Italy. I travelled by train from Berwick upon Tweed to Bari for four days sightseeing and general diversion, with no radio. There should have been a photo now of me standing in front of a train as far South as it is possible to go by rail in South East Italy (Gagliano Leuca). However, thanks to the staggering inefficiency of the local railway company FSE, we only got as far as Gallipoli (note not Galipoli, which is in Turkey). 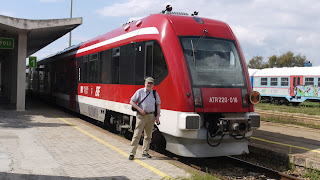 So we will have to settle for this one which shows me at Gallipoli. The train in the background is more typical of the FSE company's trains than the one in the foreground

I also made it on a different railway, narrow gauge this time, to Matera, which is famous for troglodytic dwellings. On the journey this rather unsteady photo was taken in the station bar in Altamura by my fellow traveller Norman. 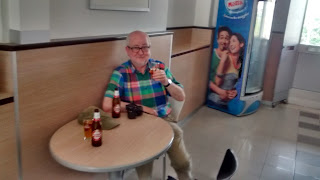 The couple in the background seem to be having a better time than I was. As soon as we sat down, took that photo and started to plan where to go next, the barman shut the bar and threw us out (the closing time for Italian station bars appears to be 13:12). We had tried to take a photo on the platform instead, but the station master told us we needed authorisation to take pictures and threw us out of there too.

The return journey I did as one continuous trip, Bari - Milan - Paris - London - Berwick, using the overnight Thello train between Milan and Paris. In Sporadic E terms that is too far for a single hop anyway, being well over 2000km, though 4 hops were a bit exhausting.

As overnight trains are becoming increasingly rare it was nice to travel on my first "International" night train - or at least that is so provided you regard Scotland and England as one country. As I have heard is always the routine on any International night train, the Border Police arrived into the compartment at 03:25 to check us against our passports. And a warm welcome they received too.

Enough of this, as we are in a radio blog rather than a railway one.
===================
Yesterday, 25 September, was the date of the annual Practical Wireless 70MHz contest. I do read and occasionally contribute to PW. It is a venerable publication and deserves some support. So I usually wade into their 2m and 4m contests. Yesterday was beset with fairly dire conditions. Signals were masked by choppy QSB. I did not stay on for long, and no dramatic DX was worked.

I did hear one other station fairly strongly but I know from experience that if he is strength 5 he will not be able to hear me. He needs to be S8 for him to even copy my callsign. We both use similar power, or at least my power is similar to what he says he runs. Any more would be over the legal limit, so he can hardly be doing that, now can he?
====================
So far in September I have of course been away for quite a while when I would normally have been on the air. There was a good VHF Es opening on 10 September. This brought in a best DX of UX4UA at 2263km, but also nice contacts into DL, F, HB9, YO and HA. I even ventured onto 4m to work HA6ZB a nice 1767km away. This was a good reminder that Es is not just a May to August phenomenon. On 40m (yes, HF!) I worked PY8JL on my wire dipole which has the centre about 5m above ground (if even that). Over 8000km on a thrown together antenna. I must give 40m a bit more of a workout this autumn.
====================
While I was away the new mast for the 6m antenna has arrived. Much to my surprise, the existing lash-up did not blow down while I was away. All we need now is to get the brackets, mast and winches organised and installed.

Geomagnetic conditions are disturbed and two coronal holes are approaching the right position to affect us. They are numbered 19 and 20 on this photo which I have copied from Solarham (Solarham is a great site and you will find a link to it on the sidebar on this site) 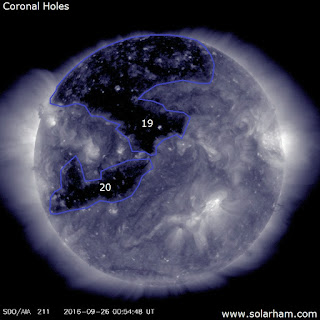 There are early signs of aurora. As usual we await developments.