Nobody knows exactly what causes Sporadic E. Yes, we know what the process of refracting the radio signals is (more or less), we know where it happens and the general pattern of when it occurs, but nobody can really say for sure what causes any specific event. Not even me.

It is not hard to see the problem. During the Summer, for instance, there are days with no Es, followed by days when there is lots of Es. Often on the higher VHF bands it will occur one day and not the next, and on the 2 metre band it might only occur on one day per year in any specific location.

So this mysterious process has been analysed looking for patterns and a theory has emerged that although most of the factors are present on many days, a certain "trigger" is needed to set off an Es event.

I find that during the Summer it is hard to see a pattern in Es events. Whilst on the one hand, on 10 metres there are so many events that the results are hidden by a vast sea of contacts, and at the same time, on the higher bands there is often nothing happening from day to day.

The Sun does not know what season it is on Earth. The Sun just pumps out its variable stream of light, infra red, ultra violet (UV), X-rays, protons, ions, ... "stuff" made up partly of energy and partly of energetic charged material. The seasonal variation we see on Earth is due to the fact that the Earth's rotation is angled with respect to the path of rotation round the Sun. During the Summer the Earth is tilted towards the Sun, and the rays fall more vertically giving us longer warmer days. During the winter the Earth is at a steeper angle to the Sun's rays, and days are shorter, the energy reaching any part of the Earth is weaker and it gets colder. This effect is basically geometrical - angled rays strike a larger target than perpendicular ones.

Of course this effect is more pronounced at the Earth's poles. At the poles it is dark all day in Winter and bright all day in Summer. The effect lessens as you get further away from the poles towards the Equator. In the tropics there is not much seasonal variation, and surprise surprise there are places where you often find year-round Es ("Equatorial E-Skip"). Not much sign of the Jet Stream influence there.

So at any given level of output, the Sun's influence will be greater during the Summer. What takes a spike in activity to start an Es event in Winter might be triggered by the background level of radiation during the Summer. Simple geometry indicates that more radiation is needed from the Sun in Winter to create the same level of flux per volume unit of the Earth's ionosphere. So in Winter perhaps I can find conditions with no background Es, but a spike of radiation from the Sun might trigger an event.

Therefore I have been looking at 10 metres during the Winter. I have been looking for bursts of Es during periods when there is usually no Es at all, i.e. January. When I say "no Es at all" I mean - not if you don't look for it. The idea is that I am looking when otherwise there is no background Es. In Summer the band is often full of signals and no cause and effect can be found.

I have spent a long time comparing Es events with signs of spikes in activity from the Sun which would show a link. I watch all the available measures of Solar activity, but principally X-ray and proton levels, plus solar wind speed. Often these measures are linked, for example during a coronal mass ejection.

Can I find small pulses in the Solar activity which match small Es events? Yes, dozens of times but here is one (well, two actually).

As for my test over many days before this, nothing of note. No solar pulses, no Es. Sometimes pulses during the night which are not going to reach our side of the Earth. There was a small event on 27 January which I failed to record properly because it was tea time (I have to eat to live you know).

First of all, let me get rid of the background dx. Pain in the behind is that darned F layer stuff which just masks me looking at Es (hey, who does not want to hear VK on 10m?).

As usual, click to enlarge if you cannot read this stuff.

Ignoring the dx, I continue to look for Es and solar pulses. Let me show you the GOES satellite X-ray flux readings 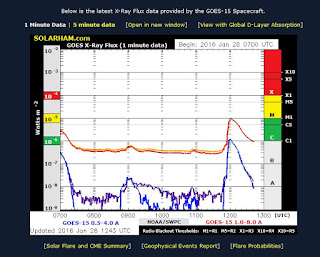 There is a clear pulse just before 12:00, peaking at about 12:00. This will take a wee while longer to reach the Earth and do some ionising, so is there a sudden Es contact then? 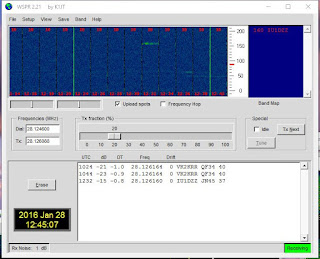 Then there is another little pulse on the X-ray graph later. Not a big pulse, but enough to deviate the readout. 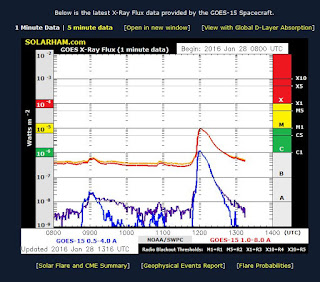 The blip at 13:00 was sufficient to raise the lower energy level rating (blue) quite a lot. Is there a sudden spike in Es after this? 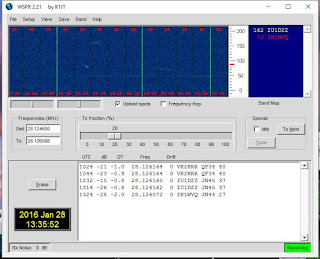 Rest of the day ... nothing of note. A bit of F layer propagation but no more Es.

These results, by themselves, prove nothing. It is just that I keep getting results like this, day after day, week after week.

It comes as no surprise that Es contacts and solar energy levels are related. Of course, during the Summer, the same radiation from the Sun causes much more Es, because it is more concentrated for us living in the North (or South) of our globe. We know that Solar energy causes Es. So what am I banging on about?

Well, I am fed up looking at graphs of weather charts and failing to find a relationship between Es events and the Jet Stream. I am fed up reading "VHF propagation predictions" rambling on about the Jet Sream and the likely effect it will have on Es next week. That may have some effect viewed from the Beautiful South, and me in the frozen North may not have that effect. Fair enough. I can only tell it like it is here.

Up here, I see every day a relationship between (even weak) Solar Pulses and Es events (even when Es is not expected). No solar pulses, no Es. Solar pulses, even in Winter, Es. During the Summer, the intensity of the solar energy is stronger overall and it is hard to pin down cause and effect. In Summer, no doubt the angle of the Sun also affects the Jet Stream, but that looks like a separate effect to me.

My belief that even weak solar pulses are the main triggers of Es is nothing new. You can see it happen with Auroral Es, you can see it with Polar Es. You can see it all Summer with the seasonal Es. I don't need a weather trigger explanation.

Surely I have now done this topic to death.

Next area of thought - In my experience Es incidence is not closely related to the Sun Spot cycle. Wikipedia states:-

So that suggests that we are not looking at a sun spot number related effect. I need to look more closely at the various factors - protons, X-rays,  solar wind etc., to figure this out more clearly. It is probably too complex for my meagre resources and no doubt greater minds (and big number-crunching computers) than I have are working on it.