I have been reading up on meteors and meteor scatter propagation. But more of that another time.

On 20 January there was an interesting aurora. I said in the title "little" but it was of long duration, only little in the sense that I only worked 6 stations in 4 DXCC. But nice all the same.

Solar ham gave a warning of a pulse arriving from the Sun in the early hours on 19 January. Although that might suggest that an aurora was on its way, they did say that the pulse was "weak". Whether the activity the next day was part of the same event I am not sure, but the Bz component of the magnetic field of the solar wind began to turn from strongly positive to strongly negative around 11:00 on 20 January.

The solar wind speed was under 400, which usually means either a weak or non-existent aurora. I find that a wind speed over 400 is needed for a good opening. The three factors, negative Bz, raised wind speed and increased proton density are good but not always necessary. Raised X-ray intensity is another good guide. It is not simple to predict what might happen when you have four indicators of how intense the aurora might be. They will rarely be simultaneously perfect, which is what makes radio aurora watching so interesting.

Anyway, the auroral oval shown by the Ovation website and repeated on Solarham is also a key factor. Under normal conditions there is a gap in the oval, and the gap circulates round the Earth over the North Pole (or South Pole for Aurora Australis). If the gap is over Western Europe then it does not matter much how good the other factors are, there will be no effects at GM4FVM.

The gap in the oval covers the period from early Morning to around 15:00 local time. If the solar activity is especially strong the hole in the oval will tend to fill in and it becomes more or less continuous but less strong where the hold would otherwise be. On the other hand, when geomagnetic activity is weak then the gap tends to widen and any aurora will start later.

You can watch the hole in the oval track round the earth if there are auroral contacts going on. I might have to wait until 15:00, but OH stations are a couple of hours ahead of me, so I can see them on dxMpas working Russian stations at 13:00 my time (but 15:00 OH time). Rather like F layer propagation, the arc of auroral contacts move with the rotation of the Earth (so they appear to come towards us from the East).

And so it proved. I could see lots of activity spreading East from Russia (on 2m) and then around the Baltic Sea (on 4m). Bang on schedule the Northern Ireland beacons, both 2m (NGI) and 4m (CFG) appeared around 15:00. In the event I could hear CFG for the next 5 hours. Sadly there were no GI stations to be heard.

Due to the rotation of the hole in the auroral oval I find I need to use magnetometers roughly along my longitude to get a reasonable indication of what is happening. Slightly East gives warning so I often use the stackplot of Norwegian readings shown in the sidebar of this blog. Also useful is Sundsvall, which is featured under "more magnetometers" on the Solarham site. Here is Sundsvall on 20th:- 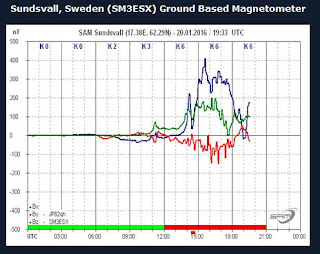 Latitude is another factor. The Norwegian stackplot is better for assessing that. Each geomagnetic disturbance seems to affect different lattitudes differently, but I do not understand how that process works. Maybe it depends on the energy levels of the particles in the solar wind.

I could hear LA stations on CW on 2m but they were sending FAR too fast for me. I turned to 4m for some sanity and worked Clive GM4VVX at 16:40. I also heard the 4m Faeroes beacon around then.

Try as I might, I could not work anyone on either 2m or 6m. I know that the Doppler distortion on SSB signals on 2m tends to drive people towards CW. But I was struggling to be heard on 6m as well. I called one SM station several times and he could hear me but could not make out my callsign.

I do not want to go for big linears, but I suspect that several 6m stations are running 400w and more. Big 6m linears are easily available at a hefty price. Whilst I am running more or less the same power as the others on 2m and 4m, I am not in that class on 6m.

Anyway, on the aurora I worked OZ5AGJ, ON7EQ, G4EHD, GM4PMK  on Mull and MM5DWW on Orkney. No new squares and I have worked almost all of them before. I finally packed it in just after 19:00.

It was interesting that the openings to each station were quite short. The solar wind speed stayed low, which probably ruled out any real DX.

Now, on 22 January it seems that gemagnetic conditions are hotting up again. As I write this it is 13:44, so the hole in the oval is still over my path northwards (see Ovation map below). However, I can see no reported contacts to my East. So maybe this one is not to be. 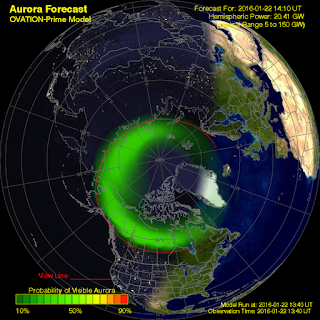 I will try after 15:00 to see if it has decided to play ball again today.