Richard, GI4DOH, kindly loaned me a copy of the book "Meteor Science and Engineering" by D. W. R. McKinley. 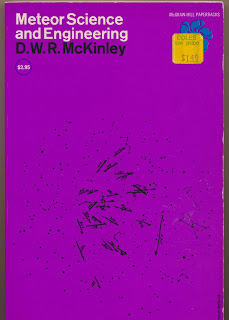 As Richard pointed out, not much has changed in the science. That is true, but it has stuck me since reading the book that the technology has moved on.

This is an excellent text book. Published in 1961 it was probably one of the first fully encompassing books on the subject. That is certainly its strength, as McKinley seems to have been perfectly at home with the astrophysics, radio astronomy, optical astronomy and geometrical aspects of all of it. He ranges from descriptions of the radio systems to an interesting estimate of the dangers to space travellers of meteors. He draws from the research of many experts.

Some of it is beyond the area of my interest, but I read it all anyway. I have not yet seen a need to grasp the geometry of meteors. Their paths of approach are not something I think of as crucial, perhaps because so much of what I do is working with random meteorites. Yes, the showers coming from specific directions do interest me, but they are not crucial to what I do ... yet.

Also, some of the maths is a bit heavy going. I have done a lot of maths in my time. I just think that I do not wish to get involved again at this stage in my life. By this I mean advanced maths. I am happy with ohms law and so forth, but complex formulae are not what I need to think about right now.

Having said all this, I really enjoyed reading it. McKinley allowed me to pass a lot of the maths by, as he has written excellent summaries. Each chapter begins with a general explanation, and these would be worth reading on their own. After that I could decide how carefully I would read the rest of the chapter.

I was particularly interested in the coverage of the development of radio astronomy in this area. I knew that meteor reflections (like sporadic E and aurora) were researched around the time of the Second World War. Also, the Jodrell Bank observatory was largely filled with war surplus material to begin with. But I did not realise that entire wartime radar systems were released for meteor research at the end of the war. What had been seen as strange effects getting in the way of military projects became legitimate areas of research.

Some of the figures really intrigued me. The idea of 1000 tonnes of material being swept up by the Earth each day as it orbits the Sun is a bit of a shock. I have heard figures like this before, but I had some idea that not much material reached the surface. I read that not only does it reach the Earth, but it can be found on the ocean floor. Most of this material is microscopic and forms dust.

Two graphs which interested me were on the subject of the distribution of meteors over time. The annual distribution looks pretty much like a sine wave with the (fairly flat) trough in February and March, and the similar peak in July and August. The value of the peak is about 2.5 times the trough, measured in hourly meteor rates. Roughly speaking, if the trough is about 100 in relative units, it remains below 120 between December and April - which is interesting as there are notable showers in both December and April.

The graph for daily distribution is similar in shape, with the trough at about 18:30 and the peak at about 04:00. However, this has shallower slopes so the top and bottom are more fleeting events. Once again the variation is about 2.5:1 in terms of hourly meteor rates.

I know that these are combinations of various findings, often combining random and shower meteors, but I can work both. So, during the winter trough the daily peak roughly equals the summer peak at the daily trough. Peak time of year and peak time of day will see five times as many meteors as the double troughs.

Now this I find fascinating. There are amateurs who stay off the bands in February on the basis that there is nothing to work. But yet, pick the peak time of day and there are as many meteors then as at 18:30 in July. Even at midnight or 08:00, winter rates are quite good.

I need to process all this information. Canny amateur meteor operators already know all this. On Sunday I worked OZ1JXY on 4 metres. OK, it took us just over 2 hours to exchange six pieces of information at just about the worst time of year and certainly the worst time of day (we finished at 17:30). But it is not true that it cannot be done. Henning pointed out that if we all sit and read a book we will not work anyone, whereas if we call CQ we might - he worked four stations last weekend and four again this weekend. Not bad for the worst time of year. I think he might have worked a few more if they had been on the band.

On Saturday I tried for three hours to work Tomas EA2BCJ on 4m. I got good copy from him, but he did not hear me. 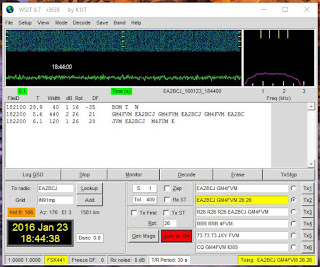 Well, you win some and you lose some. But Tomas is 1500km from me, Henning only 732km. Maybe it is a different proposition for longer distances. Here is where I think I may need the geometry.

Probability also comes into the equation. Unlike astronomers who are averaging signals over a long period, we are expecting a reply to our CQ, report, or whatever. The fact that there might be five bursts in the ten minutes after I stop, does not please me when I have had none over the previous 2 hours. With probabilities like this, a pattern of that nature would not be unlikely.

When McKinley describes forward scatter experiments in his book, he is talking about high power transmissions with high gain antennas. The idea of modulating the signals is more a theory than a reality, and all the experiments seem to be "one way" (i.e. a tx station and an rx station, widely spaced). For me, my 100 watts is a lot, and my antennas quite bold, but on his scale they are minuscule. Many amateur meteor watchers look for signals from massively powerful broadcast transmitters: I am looking for tiddlers by comparison. I also expect two-way communication which affects the probability of success quite a lot.

What has changed over the years since the book was written is really the excellent equipment we amateurs can now use. Joe Taylor has given us the wonderful WSJT software suite. What a amateur can achieve with simple commercial equipment in today's world is remarkable. Examples might be high performance GaAsFET pre-amps and the excellent sensitivity and low noise performance now offered by commercial VHF receivers.

I am left with the following thoughts (and quite a few unformed thoughts):-

1) I need to rethink what I can do at the troughs of the meteor cycles
2) I should try harder to understand random meteors (as there seem to be a lot of them)
3) The book does not really deal with my low power, relatively short distance contacts - nothing seems to.

Thanks to Richard for the loan of the book. It certainly made me think.