So why do it and what are the new antennas like? 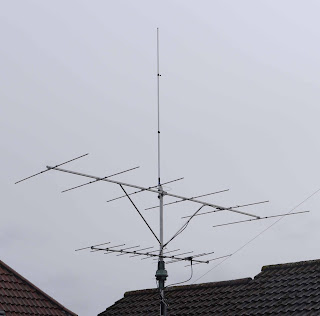 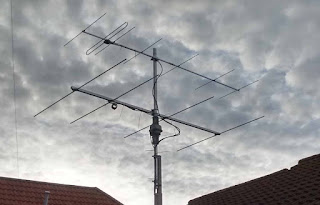 Well, for a start the 2m antenna is above the 4m one. Before it was the other way round because of the support struts on the old Sandpiper. Much study of height gain tables led me to agree with almost everybody else that the 2m one should be the higher of the two. So that basically required a non strut type construction for the 4m antenna, and thus a smaller, stiff, boom.

It was always my plan to replace the 10 ele Diamond with something longer. Ideally that was going to be a 9 element Tonna, but Tonna are in the middle of one of their non-manufacturing phases, so I could not get one. The Wimo is slightly shorter at 3m boom and otherwise seems comparable with the Tonna. I reckon I should get up to 3dB extra gain from changing the 2m antenna, and maybe lose 1dB on 4m.


The Sandpiper was so big and cumbersome that one of my neighbours noticed it and asked me what extra- complex tasks I was doing with that monster. Always wishing to minimise my impact on the local scenery, I decided to take it down. The Sandpiper is excellent, but not well made.

Laid on the grass after taking it down, the end of the Sandpiper shows the odd angles taken by the elements. This is due to poor mounting plates, and has been a problem all along. 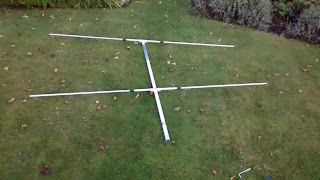 The central mounting bracket on the Sandpiper had bent ... 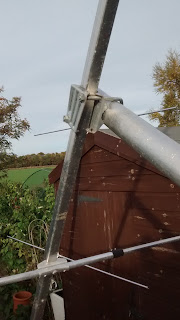 So, this is what I am comparing these new antennas with - poor construction.

First the Vine. It is much more stable than the Sandpiper. The mounting hardware is vastly better quality. I have a Vine 3/4 element 4/6m dual band antenna which I used to use, and I was hoping for the same quality of material, and it delivered. It took about an hour to build. On the mast the Vine is stable and well balanced. Full marks for construction.

Secondly the Wimo. It also took about an hour to build. The Diamond which it replaced was good enough but I hoped for more gain from a longer boom. For some reason I had expected the Wimo to be over-engineered, rather like the Vine. However, it is not, it is a fairly light weight antenna. It is very well built, but not quite what I expected. What did I expect? Probably something huge and heavy like the old Jaybeams. It is not that, rather more like a better constructed larger version of the Diamond. So the boom does flex a bit when putting it up. However, it is beautifully made and I doubt if I will have any problems with it in the gales.

So up they went and the only major problem came when I pulled through some extra Ecoflex 10 cable for the 2m beam. Now that the 2m antenna is at the top of the mast it needed a bit more cable and I could draw some from inside the shack. Then I discovered a twist in the coax which must have been there since I put it in. Sorry, this is hard to photograph when you are up a ladder using a phone camera, but here it is ... 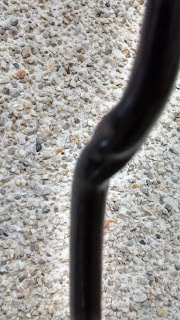 The braid is clearly buckled and I am worried that the carefully balanced impedence properties and low-loss nature of this rather expensive co-ax will be damaged. It must have happened when the co-ax was installed but it was just inside the house and invisible to my eyes. 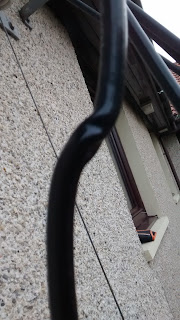 There is nothing that I can do about it, other than cutting in a joint which is likely to make matters worse. Worse still, it is now outside the house, so any joint would be subject to the weather. Best leave it I think.

Anyway, once up in the air the SWR of both antennas is pleasantly low. I worked Henning OZ1JXY on 4m meteor scatter. I heard SP9HWY once but he did not hear me. On 2m the Wimo appeared to be receiving the NI beacon brilliantly well until I tried again an hour later and it had gone down in QSB.

We shall see. You cannot see the benefits of new antennas right away. It takes time. Certainly,  the Vine appears less "lively" than the old Sandpiper, but then the Sandpiper looked as if it was about to fall apart. The Vine is shorter and has fewer elements than the old antenna, so I could hardly expect it to be better.