We usually think of sun spots and solar flares as generating radio action on Earth. Unfortunately there is not much going on there at the moment due to us being in the declining phase of the solar cycle.

Still, coronal holes can also produce interesting effects. Solarham warned us that a "middle latitude coronal hole is moving into a geoeffective position". By "geoeffective" they mean "directly facing us" on the Sun's surface and therefore most likely to affect Earth. 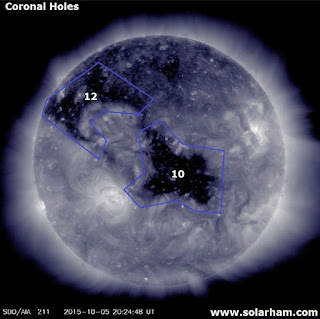 Number 10 there was right in the best location and I waited for it to take effect.

The solar wind measurements went off the scale early on 7 October but local time was about 09:00. At that time of the day the Earth's rotation puts the best area for radio effects at the other side of the world. The "auroral oval" has a break in it, and in the mornings the break is right over me. I had to wait for it to rotate (or the Earth to rotate under it) until the broadest part of the oval is right overhead (you can see an image of the auroral oval on Solarham taken from the Ovation observations).

The magnetometers went off the scale 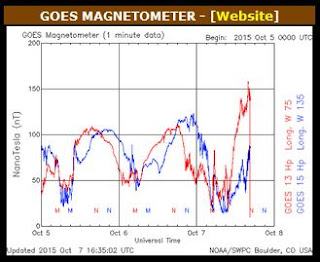 and VHF opened up to classic distorted SSB and toneless CW. Aurora! 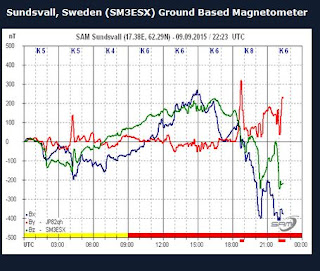 The K  number was 7, which is unusually high for a coronal hole disturbance.

There were beacons all over the place, from as far South as Dublin, East to Germany, erm Buxton (!), West to GI, North to Faeroe Islands and Norway .... 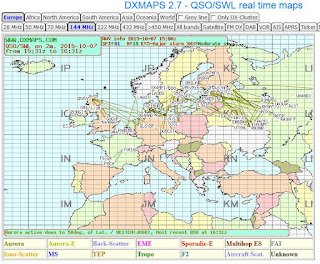 Just like during the tropo opening last weekend, OZ5AGJ was my first contact (how unlikely is that?) but this time he was on 70MHz rather than 144MHz. I stuck on 4 metres to work EI4KF and ON4IQ. ON4IQ was the best dx of the day at 700km, but his antennas were doing all the work.

Then I moved to 2m. Auroral contacts on 2m are different from 4m or 6m. The signals may be stronger, the antennas have more gain, but the distortion is worse on 2m. 2m is probably better for CW, but then my CW is not really up to is (I did call an SP station on 4m CW, but conditions changed).

This and the tropo opening makes me wonder if I would not do a lot better on 2m with a slightly better antenna. Certainly, the limiting factor on 2m here is the antenna, not the rig, the linear or the co-ax, which have all been upgraded over the past few years. My experiment with a 2m quad ended when I needed the space on the mast, and now I am back to my 10 element which has been here for years and is a bit bent. Come to think of it, the Sandpiper 6 element on 4m is looking sorry for itself too. I think that the last storm has condemned both of them to a spell in the garage.

No 6m this time as my 6m antenna is still down. A new rotator has arrived but after several weeks of wrangling with the supplier, only now does it work. So 6m has had to take a rest.

10 days, a tropo opening, a Sunday on 4m meteor scatter (yes, I eventually worked SP8SN in KO11 at 1686km), an aurora caused by a coronal hole, and the result is 11 DXCCs worked, pages filled in the logbook and a feeling the VHF is not boring.

Now, this coronal hole may return in about 26 days time, due to the rotation of the Sun. Then it might be smaller, but then again it might not.