1) 40m
As winter approaches and the nights draw in, I am having more and more fun on 40m with my make-shift low dipole. This is the last 24 hours on WSPR with 2 watts (all bands, but it was mostly 40 on that day):- 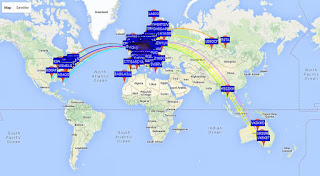 I turned away from WSPR and towards JT65 and JT9 for periods in the late evening and early morning. I do like the odd QSO. On Saturday this brought W3WTE, WA4IAM (best DX at 5960km) and W1WJW, all on JT9. Also DX for me is TF2MSN, whilst only at 1494km, Iceland is not so common a country to work. By contrast, the following night just produced lots of very strong Europeans.

2) 12m and 10m
Surprise, surprise. I was about to give up on 10m. You would have expected 10m to last well into this winter, as the sunspot cycle slowly declines. And 12m should have lasted longer. But both went out about 2 months ago, with just the occasional DX spot since.

At the weekend they suddenly came alive again, with VK heard on both bands. Plus several trans-Atlantic spots too. As usual, click to enlarge the image, if you need to. 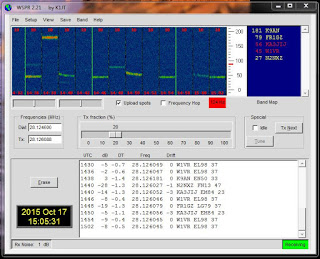 This gives me hope. With the flux index currently 120, there may be life in 10m and 12m for a while yet.

3) 6m
Now that the antenna was back up, it was time for wiring the rotator. As 40m of rotator cable (with plugs!) costs £100, I decided to re-route the cable to allow a 25 metre length to be used instead. To do this I have made a more direct route for the cables going to the second "6m" mast and the new rotator. This comes from the rotator, across to the eaves of the house, then along under the eaves to a new entrance into the roof space. The new entrance is a £2 ventilator bought from Poland via eBay. 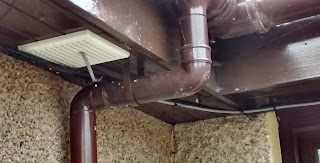 So far the co-ax cables still take the longer route via the other ventilator, but someday I hope to re-route them too. Once inside the attic, the cable runs to a conduit which takes it inside the built-in wardrobe in the shack and on to the control box.

The point of using the ventilator is to stop insects etc getting into the house. I cut a small hole in the mesh to allow the cable through. Sadly, I had to cut the plug off the cable and join it inside, otherwise the plug was too big to pass through the vent.

I wrote a long piece ages ago (never posted)  blaming rotator manufacturers for being cowardly by using these big plugs on both the rotator and the control box. This allows them to get EU safety accreditation for the cable, but stops me pushing it though a vent. I cut it and joined it inside, so I have undone the safety accreditation.

So that is 6m sorted.

I was on the phone with Gordon G8PNN. He was asking about the 6m mast and it dawned on me that there is room there for a 70cm antenna. Gasp! UHF! Well maybe. Gordon reckons that 25m of Ecoflex 10 cable might work at 70cm. Ecoflex 10 is the coax I use for 2m and it is pretty easy to use. Up to now I have been put off by the expense and complexity of using even more difficult to work with cables over the longer cable route. It certainly looks like something worth investigating. Shortening the cable route by a good 10 or 12 metres brings reasonably priced cable into the reckoning.

4m
Back on 4m meteor scatter, I received an email from Henning OZ1JXY. He has been struggling for contacts even though we are in the (minor) Orionids peak season. This prompted me to come on and call CQ and up popped OH8MGK (KP23 1750km). Reflections were good and the QSO was quick. I also worked Henning.

Henning sent me a log of all the reflections he got from me over a day and he got almost every one. It makes me wonder could there be iono- or tropo- scatter between us as well.

I must do more meteor scatter.

Two points about meteor scatter
1) it is easy - ordinary equipment is enough, especially at 6m and 4m.
2) it is there almost all the time, almost all year. OK, better at certain times, but reliable at other times.

Summary
So there you are. Busy weekend on almost all my favourite bands. And a new 4m beam has arrived with a new 2m beam on the way. Something was happening almost all the time and now on Monday morning I have already had a 2-way with VK on 10m, and even 12m is turning up some spots.

I have also ordered a book at the weekend. It is an ARRL publication on propagation and radio science.  I wonder what light that will shed on things.