VHF is not "line of sight", or not more than HF already is. 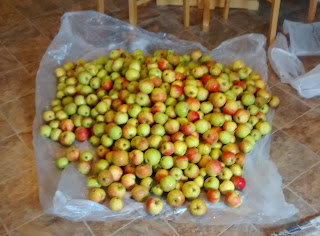 Well, the image is some of the apple harvest Chez FVM, minus the red eating apples off the new tree, and minus the russets. No doubt there will be a few more to pick over the coming days. No pears this year though.

Yesterday I visited the "Fog on the Tyne" radio rally at Gateshead. That was the first time I have been there. It was smaller than our "local"one at Galashiels but still crowded.

At the rally, I found myself chatting about VHF to Gordon G8PNN and Eddie G0EHV. We agreed how awful it is that VHF is often dismissed as "line of sight" communication. Well, this is also said of UHF, microwaves, and really anything that lazy amateurs do not want to bother with. I can be lazy myself.

VHF radio signals are no more "line of sight" than any other radio frequency. Essentially all radio energy is identical to all the rest save for a few factors, and radio is the same as light. So it is hardly surprising that radio signals follow lines of sight, as apart from the frequency radio is light.

So we look along lines of sight and think, "light travels along lines of sight". Obviously this is true as we can see things far away, and if anything gets in the way, we do not see them. But what if the thing that gets in the way is a mirror? Well, although we still think light travels in straight lines, we are happy to look at it after it has been bent back through 180 degrees. Or if we put a pencil into a glass of water we see the light bent by refraction, so we know perfectly well that some things bend light. The light is bent, not the pencil.

And we are happy that some things bend radio. The old HF hacks who dismiss VHF as being "line of sight" know that their HF frequencies are refracted (and partly reflected) in the ionosphere. But they do not seem to realise that the same processes which bend HF signals do exactly the same for VHF signals.

What I am saying here is that all types of electro-magnetic radiation, radio "waves", light, ultra violet and infra red radiation, X-rays, gamma rays, the whole lot, go straight or are bent in exactly the same ways.

We can look up to the sky and see stars which are so far away that the light takes thousands of years to reach us, so we know pretty well that it can travel in a straight line uninterrupted for a long way, so what can bend it?

Light and radio and all the rest of the EM spectrum will travel in a straight line unless affected by:-

Reflection ("bounced back" as in light from a mirror)
Refraction ("bent" as by water in glass or a lens in your glasses)
Scattering (randomly changing direction after hitting something)
Gravity (tiny effect of passing huge objects like stars)
Absorption (entering a dense medium which stops the photon and releases its energy).

We do not see much effect from gravity as we do not usually encounter star-sized objects to do it. But the others we do meet.

It is true that the difference in frequency between HF, VHF, UHF and everything else (e.g. light) means that different results occur, but the processes are still the same. The ionosphere might be more or less transparent to the light frequencies (just was well for the apples ripening), but it might refract some frequencies and not others. However, the basic ideas are common throughout the spectrum.

So VHF amateurs have fancy names to explain their particular means of bending their signals, but the processes are just the same.

Reflection
Sporadic E is largely reflection (or so we think) - from an ionised layer in the ionosphere. It also affects HF, so there can be no argument that it is OK. The reason why this process occurs is not well understood but the result is pretty common. Today (on 6metres SSB in October) I worked EA5/G3XGS in IM98 square in Spain, 1981km away. Line of sight does not carry to Spain. I cannot look out the window and see Spain because of the curvature of the Earth (and absorption and scattering too!). My signal was bent (reflected?) back down to earth by a layer in the "E region".

Radio signals can reflect off objects too (that is how radar works). However, it is a surprisingly inefficient process. As Earth-Moon-Earth operators know to their cost, only about 7% of the energy hitting the moon comes back, and the path losses have to be added to that. Radar generally works with huge power and short paths. Still you can have QSOs using reflections off aircraft and ships.

Refraction
It is not just the HF boys who get to use refraction. Tropospheric refraction brings irregular "lifts" to VHF stations. This process also works very well at UHF too. I can regularly (well, occasionally) get 1000km+ paths on VHF using "tropo". Normally, the air density declines with height, but during tropo this can be reversed. This can bend the radio signals back to earth.

The process of tropo refraction is fundamentally just the same as F-layer refraction. A difference in density of the medium causes a deflection of the radio energy path. OK, ionisation is not present, but then ionisation is not the cause of F-layer HF refraction, it is the necessary pre-condition for it. I know that idea gets a lot of folk jumping up and down, so no doubt we will return to it.

Scattering
VHF types love scattering. For HF people scattering is just a thing that happens, and it allows them to work some extra stations. VHF enthusiasts go out and look for it. Two common methods used are auroral and meteor scattering.

Essentially the process is the same. If light hits a (non-reflecting) surface like a wall, it gets scattered all over the place (just as well or we would walk into the walls). So the same is true for radio. Auroral and meteor scatter happen at about 100km about the Earth thanks to the density of the atmosphere at those levels, which is very handy for us. You can get scattered radio signals from other things too (like rain!), but these two are very handily placed for VHF contacts at 1000 to 2000km .

The radio signals reach the ions spiralling down the magnetic lines towards the North Pole, or reach ion-trail of the meteor as it burns up in the atmosphere, and they try to pass through the denser material. If it was too dense they would be absorbed, but luckily for us, enough get thrown in all directions for a useful proportion to head back to earth. The process is complex - as they hit, say, an electron spinning round an ion they will be thrown out, affecting their energy level and quite possibly causing slight change in frequency and direction (causing Doppler effect distortion). So they might be hard to copy, and the signals will be weak as scatter is not directed but thrown all over the place, but it works.
====================
OK, you get the picture.

VHF is not just "line of sight". VHF signals are reflected, bent and scattered in much the same way as HF. Different frequencies and energy levels make different things happen, but the processes are exactly the same.

There is no mystery about all this. I really believe that the current (UK?) amateur radio training syllabus is too heavily biased (!)  towards electronic theory and covers too little of the physics of radio. This leaves me and others spending years finding out the most basic principles of our hobby, without the help of well written text books.

Email ThisBlogThis!Share to TwitterShare to FacebookShare to Pinterest
Labels: VHF