I am back and 6m mast replaced at last

Hi all, I am back from a spell in Northumberland.

Ages ago I decided to upgrade the mast supporting the 6m antenna. This mast started out as an experiment when GM4JR told me that he used two masts for various bands. This appealed to me as I often use 4m and 6m at the same time. At the time I was using a Vine 4m/6m dual band beam which was OK but a compromise. Better, I thought, to have separate beams (and the results proved me right).

The first version of this second mast was a lash-up to test it out. So it had a £50 TV rotator from Conrad (sadly they do not sell them any more) and that restricted me to 35mm diameter poles. It worked but it did whip about in the wind. So I decided upon a rebuild with proper 50mm poles and a new rotator.

The rotator, a Yaesu G-450 arrived but was jammed. £450 worth. OK, stuff sometimes doesn't work straight out of the box, so I am tolerant of that, but the supplier was useless. Several weeks were wasted trying to get it replaced. I phoned the supplier twice, sent two recorded delivery letters, e-mailed them three times, and travelled 180 miles round trip to return the thing in person. It still took weeks for them to reply to me and then they promised to ring back (and didn't). So eventually I got a new rotator, but I am changing my supplier.

I have got the rotator up (but not wired yet). I made a mess of getting the antennas up and the 6m one is very low, just about the roof ridge tile. I think it will stay there. I can do better, but while I was up there I forgot how to put it up properly. Not my best job, but it will do for now. 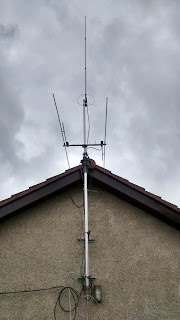 Now I need to tidy up the cables and wire up the rotator.

I really should take the antenna down again and fix the flaws, including the lack of support for the 4m co-ax which might catch the wind, better strain relief for the 6m co-ax, proper height for the 6m beam ... but just for now it will do.

The Yaesu G-450 isn't a great rotator, but it is better than a TV rotator. Winter is coming and so are the gales. And I have nice 50mm pole on the bottom section at least.

Next task are the 2m and 4m beams on the main mast. I can tilt it over so they are less of an issue.

Northumberland was interesting. We did a long yomp to reach the waterfalls at Hareshaw. These were pretty but the hike up there fairly winded me. 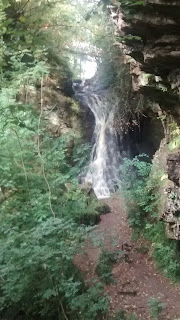 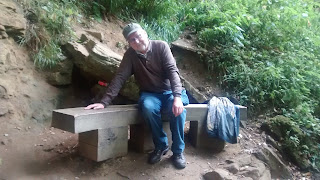 The caravan site was offering a "Dark Night" event for the Perseids meteor season in December. I was tempted to book BUT, to be frank their dark skies were no better than ours just 80 miles away in Berwickshire.

If I stay here for the Perseids, not only can I see meteor trails, but I can work DX using them. Plus I will be in a nice warm shack.

I took one of my Wouxun hand portables to the caravan but only used the telescopic antennas. I heard precisely one station in six days (on 2m), and he was a SOTA operator on a nearby peak. With very little VHF activity here I often feel hard done by, but it could be worse. I could be in Northumberland. Tee hee. Nice place though.