OK, I will concede this - my first attempt at it - does not look very pretty... 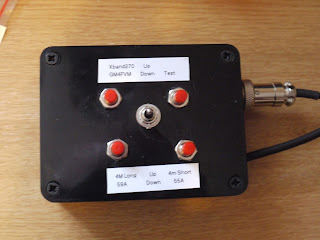 erm, but it works!

EDIT - It appears that a much neater version of this can now be had (2 years later!) from Sotabeams, if you have £69.00 to spare https://www.sotabeams.co.uk/contestconsole-switching-unit-for-icom-radios/

The initial idea came from looking through the enormous IC-7300 handbook. In there it explains that, rather than using the touch screen to summon up the "voice keyer" you could do this using a keypad.

The voice keyer allows you to make repeated CQ calls, for example. Whilst you can record 8 different calls, only 4 are available from a keypad. I actually only need two on a regular basis, "Long CQ" and "Short CQ", plus (occasionally) a long CQ call which invites calls on both 4m and 6m bands, for cross-band QSOs.

Once these CQ calls were recorded onto the SD card I found that the only way to play them was to keep the "Voice" screen on the display. This narrows the useful screen, makes the waterfall smaller, and means that I keep pressing the same points on the touch screen. To prolong the life of the screen, and to make the display bigger, I thought that the keypad would be useful.

As the handbook says "The External Keypad is not supplied by Icom". Indeed, but it is not hard to build one.

I was strengthened in my plan when I heard that David, GM4JJJ was planning to build one too (though I bet his will look better than mine).

My initial plan was to drill a hole in the base of my desk mic and mount one centre-sprung mini-toggle switch. That would give me access to two pre-recorded CQ calls. Then it emerged that the keypad could also send pre-recorded CW messages, and then I might need four options. And I also noticed that I could add an up/down VFO switch too. Although up/down tuning using a toggle switch does not appeal, I could use it to change memory channels, which is something I do a lot. So we had expanded to six push buttons, or three toggles, or some combination of that, plus five or six resistors, and then it emerged that I would have to rewire the desk mic as it only had a three core cable (well, 2 insulated cores and a grounded screen).

Plan two emerged and things had changed to envisage me building a mock-up keypad in a plastic box, at least to test whether it worked and would be useful. I had four miniature push buttons and a toggle switch from Maplin left over from another project. I also had a new plastic box also picked up at Maplin for some long forgotten project, but rather than use it I had an identical box which had banana plug terminals. This was out of use (I discovered that fuses were a good idea on my distribution system). 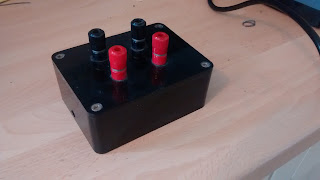 What I had assumed about this box was that the holes were in the right place. They aren't. I might have been better making my own holes in the new box, but I noticed this too late. So my four push buttons are not organised in a perfect square. Hey, this is just an experiment.

I ended up using the bottom of the new box and the top of the old one - too complex to explain.

The circuit is simple, as per the Icom manual. 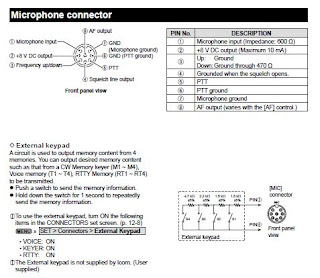 As usual click the image to enlarge if you want to read it.

EDIT in 2020 It has been pointed out that this is not very clear, even when enlarged. This should be better at showing the detail... 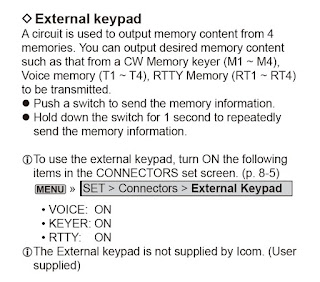 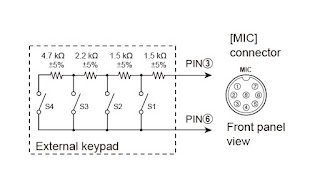 I already had the resistors, and even one to add the up/down switch. I decided to build a test version with a (right angle) 8-pin mic plug from the parts box. I had some 1 core + screen cable. The whole thing worked perfectly (Version 1).

Then I decided to organise the 3 core + screen cable. 4 core + screen was cheaper so I ordered that. As I was waiting, I might as well order a new straight 8-pin mic plug and a socket to make the thing a "feed through". By mounting the 8-pin socket in the box I can use it with any microphone. As I had ordered four core cable, I had an extra line. I would be able to take an extra feed from the rig into the box, which could be the +8 volt one. I might want to add something else in the box later (like a pip tone?). I decided to move on to this version (Version 2) as the elements would allow me to test it on the air.

So that is where it stands now - still in the test plastic box, 8-pin plug from the rig, 4 core cable into the box feeding a socket on the box into which the mic is plugged. The Pin 3 from the rig goes to the resistor network. I can select up, down, or any four of the pre-recorded messages. If the rig is on SSB the buttons select voice messages, if it is in CW mode they select CW messages. Thus the cryptic labels I put on it.

As well as SSB and CW recorded messages you can also use RTTY ones. Not much chance of me doing that.

Now instead of seeing this screen and having to press the buttons on the screen ... 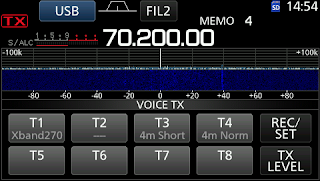 I see this screen and use the keypad ... 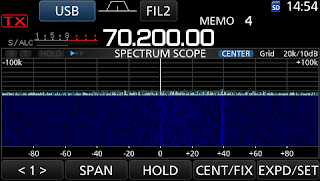 More waterfall, more spectrum scope, less pressing the same spot on the screen all the time.

I think this project was worth it and I expect to use this keypad a lot. Whether I will try to cram it all into the mic base is a bit doubtful. If not it would benefit from a neater box and better labels. But the point is it has been proved to work, which was the object of the exercise.