When I started on VHF from this QTH I used a variety of home brewed antennas for 50MHz (6 metre band) and 70MHz (4 metre band). These were mostly variations on the theme of the HB9CV with added reflectors and directors.

The wind here soon took its toll and I moved on to a sturdier commercial 6m/4m dual band beam. This would only fit if it had a short boom, and I eventually became disenchanted with its performance. I was never really happy with the feed arrangement whereby the 4m "driven" element was parasitically energised by the 6m one. Psychological doubts were raised by this - "how can this work when my co-ax is not connected to the antenna?". Silly doubts I am sure, but the other thing was that if I moved the 6 metre antenna to a separate mast I could make the 4m one longer ... so I put separate antennas on separate masts.

During the time that I used the dual band antenna I kept separate rigs for each band. I had become used to monitoring both bands at once and of course this is the area of amateur radio that I enjoy most - chasing the propagation between the VHF bands. To allow those two rigs to feed one antenna I built a "stub" diplexer.

The basis for the stub diplexer was an article by John, G4SWX, in Radio Communications (I believe it was the March 1996 edition, but it was spread over two editions of the magazine so I am not sure about that). David, G4ASR, was very helpful and he was able to provide more details. I broadly followed the plan in the article apart from substituting PL-259 plugs for the soldered joints and using RG-213 co-ax. Afterwards I wished I had used "N" types, but the extra cost would have been considerable.

In my case I mounted the whole thing on a wooden frame. The resulting monster was 3.2 metres by 1 metre and therefore would not fit in the shack. I eventually mounted it in the attic. Two runs of co-ax ran to the filter and then a single feed to the antenna. This rather "Heath Robinson" device worked 100% perfectly.

Now I made this in the days before I had a proper antenna analyser and before I had a good razor saw for cutting the co-ax exactly to length. I cut it to plan and did some simple tests with two hand helds, two SWR meters and two dummy loads which seemed to suggest it worked. The 6m trap rejected the 4m signal which followed the resonant path to the antenna rather than the filtered one into the front end of the other rig, and vice versa. In the end there was no alternative but to connect the two main rigs to either end of the thing and press the PTTs, but neither rig  blew up. In fact it worked faultlessly for a long time. No moving parts, no lumped components to blow up, nice simple co-ax engineering.

After I gave up on the dual band antenna the diplexer stayed isolated in the attic - it had been assembled up there and it would not fit back down through the trap door. However, some of you may be aware that I had an "incident" with the 6m antenna, and it is now temporarily on the same mast as the 4m one. Predictably they are too close and operating on either 4m or 6m blasts the other rig and threatens to blow up a front end.

So I hit on the idea of separating the two elements of the diplexer and using them as trap filters - a 6m trap on the 4m rig, and a 4m trap on the 6m rig. Unscrewing the wooden filter frame from the roof timbers caused it to break in the middle, which was handy enough (I since sawed through the frame at the diplexer feed point and made two elements shaped like the letter "P"). I had some confused idea that I would not need the matching length of a quarter wave at the rejected frequency, but a few tests with the antenna analyser put me straight.

The ARRL Handbook warns that the MFJ analyser is not accurate when it comes to tuning stubs and they seem to be right about that. I took their advice and allowed for up to 500kHz error, and at that level of resolution the filter elements seem to be very good stop filters.

Once I got them down from the attic and sawed them in two, tested them, and got ready to try to fit them into the shack I took a couple of photos. Here is the 4m filter, which rejects 6m ... 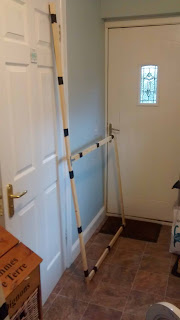 As you can see, it is still pretty vast even after having been separated from the other element. The 6m filter, which rejects 6m is much smaller but still quite a monster ... 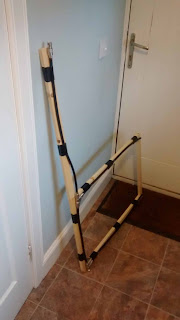 I did eventually get them into the shack and somehow got them hidden behind furniture. Then came some odd results when I tried to test each one separately, but when I put both of them into their respective antenna lines they worked quite well.

I can now transmit on either 4m or 6m without the S meter on the other rig moving at all. There is a slight increase of noise noticeable, but it is not significant. Hopefully, this will save the front ends, and in particular the preamp on the 4m linear. It is hard to calculate the insertion loss but results on that front will emerge over time. However, when I used them as a diplexer there was nothing apparent after hours of complex tests.

These elements were built rather roughly and I am sure that I could do some trimming to make them better. The 4m filter raises the SWR from 1.1 to 1.4, whereas the 6m one seems to make no difference at all. On the other hand, surely I do not intend to keep both antennas on the same mast, and once I separate them again our old friend "Inverse Square Law" will render the filters unecessary again. Or will it?

Just for now I shall leave things in "test mode". These tests have a habit of becoming permanant features.

The question which needs to be answered, apart from where the 6m antenna will eventually end up, is just how important is being able to monitor both frequency bands anyway? Yes, I do enjoy it. I do not need to have enough isolation to transmit on one and listen on the other (though now I do have that). What I want to do is to listen on both at once whilst occasionally transmitting on either. There are other ways of doing that. A rig with two rx slices might work, for example. Maybe I would still need the diplexer for that. Anyway, come on Icom and the others, get working.

Stub filters are often overlooked and can be very effective. I doubt if a lumped component filter would be able to separate 50 and 70 MHz effectively, and even if it could the losses would be higher and the power handling ability would be lower. At 50MHz rejection the stub filter is rather large (!). I have seen photos of these filters with the co-ax coiled, but I feel that would open to the door to too many variables. Coiling RG213 is tricky and thinner co-ax has drawbacks. Despite the consequences of all this making for two very bulky devices, I still reckon it is worth it.

As a bonus, the 50MHz filter in the 4m lead provides some attenuation of my 144MHz signal too. Open ended stub filters work at odd harmonics too, and whilst this would include 150MHz there still seems to be some reduction in the impact of transmitting on 2m. It does not have any effect the other way of course, so if I want to reduce the 4m transmission effects on the 2m rig I will need to add another filter. Pass me the hacksaw ...