I know it is only three days since the last posting with almost the same title, but I seem to feel the need to rant on, and introduce MSHV.

I am a big fan of Joe Taylor's WSJT modes. I use the software he publishes a lot - for WSPR, JT65 and JT9 in particular. These modes are included in the latest WSJT-X version (I use v1.6.1).

WSJT-X is the wrapper used to include all the current modes and it can be used with CAT control to set up your rig frequency and so forth. We are promised that gradually all the new "JT" modes will be included in WSJT-X offering a seamless operating experience.

This is great but operators on the bands are not keen to switch to new modes. ISCAT for 6m and JTMSK for higher VHF bands, are both on offer in v1.6.1, but almost nobody uses them. Instead the bands are full of JT6M and FSK441, modes which are now rendered obsolete by ISCAT and JTMSK.

As a result, most operators on the VHF bands use older versions of WSJT - WSJT10 in particular, to generate their signals, and those older pieces of software do not support CAT. The consequence of all this is that using WSJT10 via a USB connection with the Icom IC-7100 and 7300 is almost impossible without some additional software such as CAT7200 to intervene and convert things.

I am pretty loyal to WSJT. However, it was made as open source software for a reason, to allow others to package those modes as they thought fit, and thus stimulate development.

Frustrated by the lack of software which can produce FSK and JT6M and work with the Icom rigs using digital audio streams, I have been checking out MSHV. Greg, SP3RNZ, suggested this software on his blog - see comment in my last posting here http://gm4fvm.blogspot.co.uk/2016/06/icom-ic-7300-wsjt-usb-send-fsk-and.html

I had to test MSHV before recommending it myself. I did try it last year in an older Beta version (v0.99) when Chris GM4ZJI suggested it, but now it is in a much more advanced state in v1.13. There are 32 and 64 bit versions and I have tried both. It works fine with both the IC-7100 and the IC-7300 without the need for USB SEND, CAT7200 or anything else.

MSHV has proved to be a complete success here so far. Here is a screen shot of me doing some listening on 144.370MHz 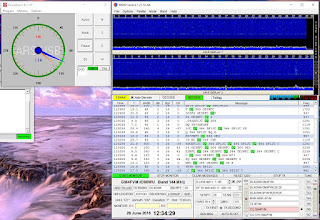 I put out a CQ using MSHV earlier and worked DL4DWA in JO61 (1138km). A good little test, and a quick 6 minutes QSO was the result.

MSHV seems to put very little load on the processor and so far has not crashed or lost contact with the rig. It is also very nice to be able to include the working frequency without having to insert it manually every time -MSHV provides a handy box to include this feature.

LZ2HV, creator of MSHV, says that he took the open source software from WSJT and re-wrote it in C++. Presumably it includes the latest hamlib settings as both the Icom rigs are in the list of supported equipment. MSHV includes JTMS and ISCAT as well as FSK441 and JT6M. You can download it from here http://lz2hv.org/mshv.

Installation is easy, but do not make the mistake I made - once you have downloaded MSHV and removed the files from the ZIP encoding, the .exe applications with their pretty icons look as if they can be clicked and moved onto your computer's desktop. No! You need to create a shortcut and move that to the desktop. If you make the silly mistake I made, the software will work OK but you will have to re-enter the audio, interface and macro settings every time you open it. On the other hand if you create a shortcut these will be remembered each time. Stupid mistake to make. You would think I would have learned by now ( I made the same mistake last year with the earlier version).

I can see the issue for the WSJT team. To spend valuable development time incorporating "outdated" modes into WSJT-X may seem like a waste of resources. But, maybe to spite them, most amateurs are still using FSK441 and JT6M. This arose before - JT6M was dropped from WSJT9 and replaced with ISCAT. By version 10 JT6M had been re-introduced.

The best way for this sort of problem to be resolved would be for amateurs to download the latest version of WSJT-X and use the modes provided. But amateurs are resistant to change. They like using outdated modes. Look how many use RTTY, a spectrum consuming, insensitive, slow, power wasting dinosaur from the days of mechanical printers. And as for AM ... but amateurs don't change easily.

I thought this is supposed to be a scientific hobby, not a museum for preserving ancient technology.

For as long as people are using FSK441 and JT6M and refusing to use JTMS and ISCAT this problem will continue. Even then I saw a report that Joe Taylor had suggested that JT9 would be the preferred mode to develop further for MS use. I can see why, as the advanced versions of JT9 are terrific, but this is a step further beyond even ISCAT and JTMS. If most amateurs cannot even make the first step, when will they make the second?

There is  no point me using new high speed versions of JT9, as I have tried to do, only to find everybody else is using old style JT6M.

Luckily, for as long as we stick to FSK and JT6M, good people like LZ2HV will be willing to invest their time and effort into making software that allows us to continue. I for one appreciate his efforts in producing a very good re-formulation of WSJT modes.

I wish it was different. I wish we would set a date and change over to the latest modes produced by the latest efficient software. We could also change our working frequencies to fit into the bandplan - for example use 50.320-50.380 and 70.250 as the bandplan suggests.

In the real world I know this is not going to happen.

I think that the present situation just devalues the bandplan. At the moment the bandplan sets out clearly the frequencies and we all ignore them.

Until that great conversion day dawns, when we all upgrade to the best and fastest JT modes available, I suspect MSHV will have a large band of fans. Including me I guess.

Please cancel the suggestion, made by me just 3 days ago, that I was sticking with WJST and CAT7200. I am modernising and adopting MSHV.