That rather long and waffly piece sets out the detail, but in general the idea is that I enjoy jumping up the bands to catch the highest usable frequency I can get.

Today was a classic example. I have been hiding away with a migraine headache. Shut in the shack with the lights off feeling terrible and there was nothing on the radio anyway.

As I recovered I thought I would give the radio a go.

I had been monitoring 10m WSPR and it started to open into Germany and Poland. I tried 6m JT65 and after a while I worked one station:-

My thoughts then turned to 4m, and the FM rig was finding Russian OIRT broadcast stations.

I got a bit carried away as I have never worked SP from this location on 2m. GM4JJJ was also on the band and he moved up 10 and I moved down 10.

Imagine it, not able to find a quiet spot on 2 metres thanks to Polish DX.

After a few calls I returned to 144.300 where JJJ and myself took it in turns but that seemed to be it on 2m.

So  I moved back down onto 4m.

This must be the first time for me that I have worked the same station in the same opening on both 2m and 4m. Marek suggested we move to 6m but I lost him there, sadly. In the meantime someone else called me on 4m.

Time for tea, after which:-

I have often had 4m/6m doubles with the same station , and many cross-band contacts between those bands, as they a quite close proportionately to their frequency. But the same stations in 2m/4m doubles is much harder. 2m is more than twice the 4m frequency.

And finally, the one that got away:-

I really enjoy the short openings you get on 2m sporadic E. Or I enjoy them if I happen to be sitting at the rig when they happen. This was the first good one this year, after a couple of near misses. Maybe that is it, or maybe we will get some more.

Working two of the same stations on both 4m and 2m was a bit unusual. It also shows that there are some VHF fans around doing the same band hops which I do.

I am not alone.

Here is a screenshot of the OIRT broadcast stations cluttering up the 4m band. 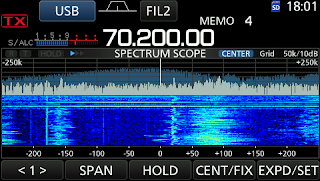 At least it proves that the band is open.

My head still hurts and I managed to get several of the log entries mixed up. At least I could correct them. Migraines really disrupt my functioning and affect my sight and reasoning ability. I become clumsy and un-coordinated. Lucky, they are rare for me.