A great week of Es, followed by lots of tropo.

On the Friday I read the RSGB Propagation News and it was pretty downbeat:-


For next week it's not a good sign that there seem to be few suitably-placed jet streams, often involved with Sporadic-E formation. They are mostly located over Spain and the Mediterranean and so a bit too far away.

After seeing that I expected a pretty poor week (though of course as I do not believe that Es is predictable using Jet Stream projections I was not entirely sure I wanted to give up).

I got home on the Saturday and tried to see what I could find.

What followed was not a product of the lack of "good signs", as it was probably the best week of the year for Es all over Europe. Best week SO FAR of course.

By 31 May I was getting tired of it and not working all I could.

By 3 June I could hardly bring myself to turn on as I was at full capacity (I have not even worked out which new squares those brought, as there were many contacts in each country).

Come 4 June I was back on 6m working several CT stations.

I expected the RSGB propagation news to make some reference to that fact that the previous week had suggested that the Jet Stream would not be helpful, but there was no mention of the week's openings. It said:-


As we said earlier, we’ve had a good start to this year for Sporadic-E with many days of European Sporadic-E on 50MHz upwards to 144MHz. Tea time on the 30th produced strong 144MHz signals from YU1EV and others, copied from East Anglia right over to West Wales and the Isle of Man.

I am not sure how that ties in with the previous week's comments. However, I noted this remark:-
Disturbed weather patterns with strong jet streams are what is required for Sporadic-E, but the next week is looking quieter as the jet stream migrates to the northern parts of Europe. This could mean paths to Scandinavia more often than southern Europe as in recent weeks. If you do one thing, check the VHF bands for Sporadic-E around tea time, before eating, and you’ll catch most of what develops.

I think that, based on my experience, suggesting listening before eating your tea is not really the best advice. Yes, it follows the old idea which you read in books about the mid-afternoon break (not much happening here 13:00 to 14:00. But there is still lots of activity in the morning. I think that most experienced and current VHF operators would be surprised by that advice.

It may well be that studying Jet Streams is helpful in understanding Es, but I doubt it. However, I have no proof (which is the basic problem for me). What I do see is that, not just this one week, but for weeks on end, the RSGB advice based on Jet Stream patterns has been wrong, time and again,, at this QTH. This was just one week, but it was wrong again.

I do not think it is very scientific to make a suggestion one week and then just ignore the fact that it was wrong the next week. In my view science only progresses if we accept that we are sometimes wrong and learn from it. So the next week we should accept our errors and move on.

"Disturbed weather patterns with strong jet streams are what is required for  Sporadic E". Really? I read the articles about this, and I found a lot of rhetoric and not much actual proof of that. It might be that these things have some influence, but to say that these things are "what is required" is surely going far beyond the simple facts. Doesn't the Sun have something to do with it? And there is Sporadic E under a lot of different conditions.

Or, to put it another way, aren't there often "disturbed weather patterns and strong jet streams" when there is no Es? Just looking for Es and trying to prove a link is not sufficient for the scientific approach. We need to see the times when those supposed "required" factors are present and there is no Es. Why not? Explain that one in terms of those two factors. In that case it is very convenient not to mention when the predictions go wrong.

Maybe, as I say, Jet Streams are helpful in analysis of Es. Can they predict Es? I think not. You might say that Es is inevitable and Jet Stream studies might help the understanding of the direction and timing Es occurs. Well, maybe, but again I see no proof of it.

The keys words I want to see are causation, necessary factors, requried factors, proof of cause and effect, evidence, predictability, repeatability and reliability. Or I would want to see these before I started using the RSGB website to peddle my own pet theories. So I will just stick with my blog for now.

What do I have to put in the place of these theories? Nothing. I think that in the Winter, solar events play a part and I need to do more study before I can draw any conclusions. But if it proves wrong, then it proves wrong. For Summer Es, I feel pretty sure that direct solar influence, both in atmospheric heating and direct radiation energising the E layer, plus the combined effects of the mangetic field and sheer to build up concentrations of ions, will prove to be far more influential.

But each to their own theory.

Then on 5 May a large Tropo event started. The 5 May RSGB News stated:-


The weather pattern is fairly slow moving and although we start with high pressure, this will get displaced to the east. This could still provide some Tropo from northern Britain across to southern Scandinavia.

OK, you cannot really predict accurately where these openings will occur and it was very localised. All the stations I worked were in 7 squares. But if the area cannot be predicted, why try? Is this not just misleading?

Working 58 stations quick-fire on one day took its toll. I was shattered. But I was in a constant pile-up. VHF contacts are not "599 73 OM" affairs, or mine are not anyway. I always try to exchange meaningful information would might develop more knowledge about the conditions and the stations. It was exhausting.

So far on 6 Jine I have worked 6 PA, 2 German, 1 ON and 1 M6 stations, all in the same tropo event. With a bit of luck, the charts suggest that we may get several days of potential enhancement. I wish that the proposed opening into Scandinavia will happen, but we will see.

I was blessed with an education in statistics. I know that if we see good conditions this week then we can reasonably predict a return to normality next week. And so it is with Es. This week it has calmed down again. Which is what anyone might expect. With high pressure, we might expect tropo openings. This is not prediction or "news", this is what we expect based on the statistics. If something proves to be unpredictable in our current analysis then we should accept that and learn from it.

With Es, it usually changes from day to day, which is what made last week so unusual. Dare I say it, unpredictable.

I feel that we would be better off without advice to turn our antennas the wrong way, listen at the wrong times and generally expect the wrong conditions.

Oh, I am really worn out. I need a break from this job and I should take up a hobby.

Wait a minute, this is supposed to be a hobby, isn't it?

Finally, I always try to get in one photo. In the absence of a picture to illustrate these events, here is a photo of a train when trains were real trains. The location is Carnalea and the date is 9 Aprill 1985. 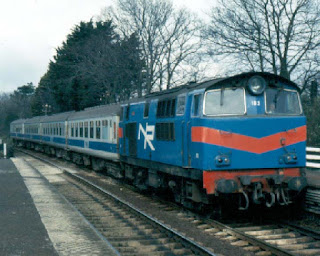