Geomagnetic conditions have been disturbed for a few days now thanks to a Coronal Hole pointing straight at us.

The radio conditions peaked here at about 16:00 on 8 May, though I heard auroral effects for a couple of hours on either side of that time. The disturbance rumbled on for a couple of days and the absolute peak seemed to be at about 03:00 on 9 May - not a good time for radio in Europe.

Still, the peak here brought the usual effects. I heard the GB3NGI beacon on 2m and the OY6BEC beacon on 4 metres, plus various LAs and PAs on 4m and 6m CW. I might even have resorted to CW but I suddenly recalled that the keyer had the wrong plug on it (grrr). 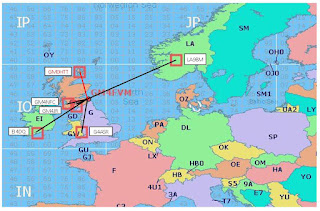 It started with me working GM0HTT on Orkney in IO89 on 2 metres (red on the map). Then GM4NFC (IO75) on the West Coast on 4 metres. I can not work the West Coast direct, so although Alex is only 76km away I can only work him under enhanced conditions. He was also using an IC-7300 for his debut on 4m aurora. The "Southern Uplands" presents as much of a boundary to me as the Highlands. With a chain of hills formed by the Cheviots, the Lammermuirs and the Pentland Hills, the barrier to me working the West of Scotland or the Central Belt is pretty impressive.

After that Andy GM4JR was pretty strong on 4m, but then I had about an hour of hearing just those stations and beacons until at around 17:30 I heard LA and PA stations again on CW. I was hunting around for an adapter or a plug for the keyer when I happened to press the voice keyer key on the rig which sent CQ on SSB. This brought a response from David G4ASR (IO81). After that I worked LA9BM who had heard the SSB contact and switched mode. JP40 is a new square for me on 4m - 4m square number 170 - and a healthy 798km away. It went quiet again and I had still not solved the keyer lead issue when I heard Tom EI4DQ in Cloyne on CW. Still with no key, I replied on SSB. Tom switched mode and we completed a contact at a healthy 592km.

This was as unique an auroral opening as any. As it had been boiling away for a day or so I was waiting for it to peak here. Watching the auroral oval on Solarham gave me a good indication of when conditions would reach here. Although some people in Europe had a few contacts in the morning, by watching the oval I was pretty sure my chance would come around 16 to 17 hours, which it did do.

Although I did reach two stations well south of me, I only heard these two "big guns", who are experts at VHF operation. I did not hear any other southern stations, which suggests it was a fairly limited event. When it opens properly there is always a pile-up from the South! Nice to work JP40, but as usual the lack of activity means I tend to hear beacons and not stations. 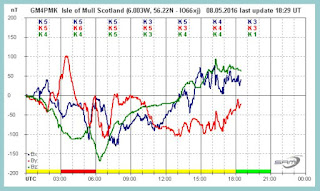 Thanks again to GM4PMK for keeping his magnetometer site going. Even with a mechanical excavator in his garden (which caused a huge spike a few days ago) he is sending out useful information.

Once again, what a joy to see these strange events unfold before our eyes.