BBC Radio 4 In Science, The Culprit, and a taste of Summer at last.

I have identified the culprit for my computer crash. Here it is:- 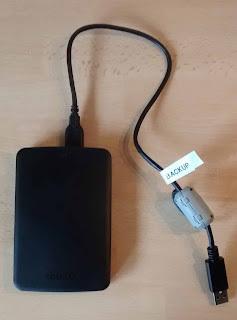 A Toshiba 2 Gb storage disc, marked "Backup" in my complex naming system (other imaginative names on others are "Old Backup" and "1" and "2").

To its credit it took a system image of the computer and then fired it back, which fixed the problem completely. Then it caused the PC to freeze and crash so it is, as they say round here, "deid". So it was the problem, and the solution as well.

I think we have to learn from these things. The importance of backup is easy to forget. Also, have a spare machine around, or at least one you can borrow, as otherwise you are QRT until you can fix it. In a cruel reversal, I am recommending backup discs, which were the cause of the problem too. That is what I learned at school to call "a paradox".

Everything is restored - even my accounts and, most important, my VHF squares worked database. Over the past 20 years I have had about 5 or 6 incidents where the whole system has gone down thanks to hard disc failure, plus a couple of spectacular power supply failures which put spikes into discs. This has been the easiest to restore and nothing got lost but it all just shows how quickly we can be engulfed in a panic. Despite it all, I am not about to go for cloud storage, not with well over 10Gb of material.
----------
I am a keen listener to the BBC "Inside Science" programme. Well, I take the podcast. I hardly listen to live radio broadcasts now apart from Classic FM as I work in the kitchen. I consume hours and hours of podcasts and downloads.

A couple of weeks ago "InScience", as trendy listeners call it, featured a piece on the QB50 satellite project. Basically this is a plan to launch 50 cube sats to examine the Earth's atmosphere at heights above those which can be probed by balloons and below the normal orbits of existing satellites.

The point is that existing scientific satellites are in orbits which are long lasting (or indeed more or less perpetual) to give them the lifespan to conduct their research. It would be tricky to put one of these into a lower orbit as it would be slowed down by the atmosphere and eventually burn up on re-entry.

The QB50 ("Cubie-fifty") project envisages the launch of 50 small cube sats which will be regarded from the start as sacrificial, having lives of about 3 to 6 months or so. However, they will be small and cheap but still capable of trying to investigate the atmosphere above 100km. The main target for study is the thermosphere (technically from 85km up) and it includes the E and F layers of the ionosphere. There is enough atmospheric density there to cause the orbits to steadily decay and the cube sats will eventually burn up. This is not quite the disaster it would be with a full sized satellite.

This is (of course) above the troposphere and therefore above the influence of the Earth's weather!

The upper limit can be deduced by the International Space Station, which orbits as low as 330km and has to be periodically boosted by rocket firing to stay aloft. There are some satellites closer to the Earth than the  ISS but they have to be carefully designed to stay aloft and so this is the "grey area" which is largely un-researched.

Basically, the ionosphere between the bottom of the E layer to the top of the F2 layer. Interesting (to me anyway). The D layer can be explored by balloons.

It will be interesting to find out what QB50 discovers up there. They have mass spectrometers which should help pin down the composition of the layers more accurately than we know at present. This is the key area for our radio propagation yet we know very little about it. The broad composition we have deduced, but the fine detail is missing.

As they say, this region is laughingly called "the ignorosphere" as there has been such a small amount of research done there.

You can find the podcast to download as an mp3 file, or listen to, here http://www.bbc.co.uk/programmes/b0766g8g. As for the piece about refuelling on the Moon, well, we will see! And on the later piece, we did have a hydrogen storage device in a solar and wind powered "eco-house" in the village. A lot of the residents were not keen to have a store of explosive gas under pressure in a garage. In due course the garage caught fire and was destroyed - after the hydrogen storage plant was removed! How strange!
----------
There was a Summer-type Sporadic E event here today on 10 metres. Hooray! 86 WSPR spots from round Europe on Es and one from Reunion Island which would be F layer. Nothing on 6m here yet even though certain other lucky readers have been hearing 6m Es. Grrr.

It is great to have signs of Summer. We need it. I went out this evening (28 April) and took a photo of the orchard where the tender apple and pear buds are forming. They, and the rest of our kitchen garden, need a bit of light and warmth just now. The photo below shows what a late April (almost May) evening looks like in Bonny Scotland. 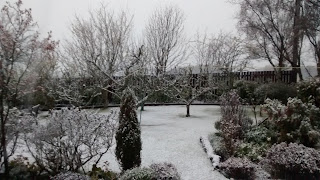 Yes, it is a colour photo.

It is still snowing as I write. It is due to snow all night. Ah dear.