A different view of aurora.

I have been finding out more about the IC-7300, but propagation conditions continue to infuriate me. This time of year is always frustrating for VHF-types, as meteor showers and sporadic E improve the situation  by the end of April, which makes these few weeks seem unbearable.

I have been so bored I have been receiving pictures from the International Space Station as it passes over. 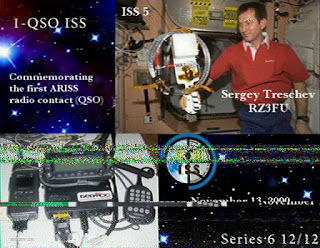 But the neighbours like them. Shows them what all those awful antennas and masts are for.

There was a small aurora yesterday and today (13-14 April 2016). Nothing worked from here but I thought you might like to see the GB3NGI 2m beacon as seen from here via the auroral curtain.

Usually I have to beam 260 degrees (almost West) to find the beacon, because that is where Northern Ireland is from here, but during an aurora I beam at 30 degrees (just East of North) and the beacon signal, though loud, has no tone and sounds raspy.

Here is an unusual view of the SpecJT graph of the beacon's signals via aurora:- 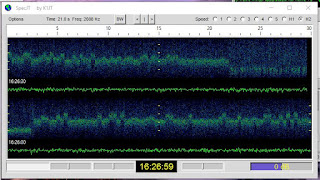 You can see a wide fuzzy line. Starting from the bottom left, that is a carrier, though as you can see it is very wide. The point at which the signal starts sending an ID in JT65B mode is where it starts stepping around. It then moves over to the upper trace and you can see the data ending and then after some carrier you can see the callsign being sent in morse. For comparison here it is direct and not via the aurora:- 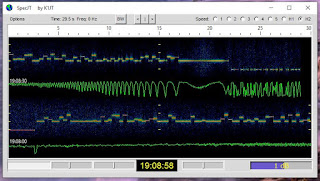 You can see the carrier clearly now, and even the morse. The JT65 can be clearly made out. You can see the signal strength marked by the green line and it is spiralling about due to tropospheric variations and aircraft scatter.

The wide distorted signals on aurora are very difficult to copy. That is why CW is so good, as the presence or absence of a signal is easier to observe. Despite that, I do make SSB contacts, but data, as you can see, is impossible.

Those images were taken with the FSK mode waterfall, which scrolls left to right. I switched to the JT65 waterfall which goes downwards.

Here are two more images, this time the top one shows the direct path, and the bottom one shows the auroral path. (To keep you on your toes I am swapping them round from the images above). I will not bother showing the decode results on the auroral one, because as you can imagine, there was nothing to decode. The multiple traces on the direct carrier (higher waterfall) are due to aircraft reflections - though the signal decoded perfectly. The wide splodge on aurora waterfall (lower) has no chance of decoding. 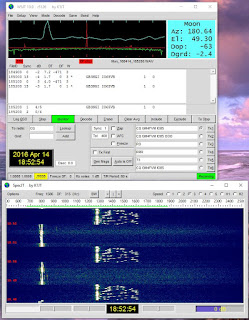 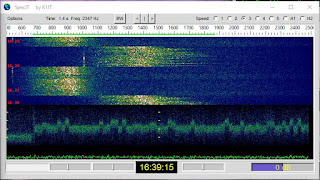 Sometimes I wonder why I struggle with aurora, as the signals are sometimes almost impossible to copy. Well, it is a remarkable natural event, and in fact I feel privileged to hear it. I do not really mind when I do not make a contact, just being there to witness it is enough for me.


Believe me, if it looks odd, it sounds WEIRD.