Radios for two decades and more on the IC-7300

Radios for two decades? Does that mean a radio lasting two decades, or two radios "of the decade"?

Bri, G0MJI asked me which radio I bought when I was 40 which I still have now that I am 60? My enigmatic reply was that it had a cassette recorder attached. Well here it is ... 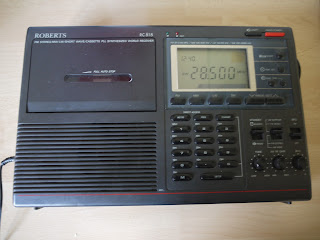 Note to photographer: you really must try to correct for those converging verticals. Why don't you try pointing the camera at the radio?

A Roberts RC818 - quite something in 1995. I bought it in John Lewis in Edinburgh and it is still in the original box, complete with the book and the wire antenna. I wonder will the IC-7300 still be around in 2035?

This radio (and of course its Sangean version too) was a pretty good performer for its day. Big, certainly, but I wanted general coverage and a BFO to receive SSB and CW. I think you have to put this into context. I am a child of an era when rigs drifted like mad. Old Codars and Trio 9R5DS and Yaesu FR50Bs were all over the place. The whole thing changed with the arrival of the Yaesu FRG7. This was my idea of a radio of the post FRG7 vintage which I could cart about with me. It went to Greece straight away, and pretty well every year after that it was lugged off to wherever I was going. Later a rather smaller Roberts arrived, and in due course the FT-817 kicked them both out.

The Roberts had its limitations. The VFO synthesiser steps were either too wide or too narrow and from what I recall the small steps were too small to register on the digital readout. So you had to count them. But it worked and it was even stable enough to receive WSPR.

Moving on to this decade's radio, the IC-7300 is certainly a remarkable beast.

Last evening's 4m contest was AWFUL. The conditions were woeful. I worked two for sure and probably a third. I heard almost nothing else. Not a good place to test out a rig. Halfway through I changed over to the IC-7100 for comparison but I could hear nothing on it either.

I did get comments on the good tx audio quality (is that in comparison with the IC-7100?). But the major point to note was the different receiving experience. I listened to a distant station having a ragchew. Turning off the preamp left me able to hear the speech clearly even though it was very weak. The lack of noise was remarkable.

Some time ago I agonised over the difference between the sensitivity, noise and AGC performance of my Flex 1500 (since sold) and my FT-817. All that is here. It seems that I have to learn that lesson again. SDRs are just different. They sound different to listen to. There is a quality to the sound which is missing in superhet radios, or at least the ones I can afford to buy.

Right, also on the IC-7300 front, I have added the Icom RB1 remote operating software (thanks again Scott). This means I can control the 7300 from my shack computer. Any networked computer actually. I should also be able to show the waterfall on the computer screen, but so far that aspect hasn't worked. The software said I have to raise the USB data rate to watch the waterfall, which is fair enough. However, when I do that the CAT control gets lost. I have changed the COM port speed and the software communication speed, but I have not managed to get the rig to follow suit. Yet.

Given that there was not much to work I tried putting the IC-7300 onto HF duty. I set up WSPR but as the software does not yet support the 7300, I used a second version of "CAT-7200" to work the PTT. I had forgotten that this version of the WSJT-X suite had "frequency hopping" turned on but it was not controlling the rig frequency, so several of my 40m spots were reported as having been heard on 12m and 10m. Oh dear, silly mistake to make. Anyway, all the data software connected to the rig easily. And it transmitted WSPR data which other stations decoded.

Plugging the 7300 into the PC (you have to provide your own USB lead) went smoothly. I already had the drivers loaded from the IC-7100. The COM port and virtual audio card installed straight away (unlike the 7100 there is only one COM port as there is no GPS input). Setting up the memories and function menu should be easy for anyone familiar with Icom's funny little ways.

I have been comparing the 7300 and 7100 on weak signals. As before, I set up a co-ax divider and fed the two rigs into two versions of WSJT. Then I turned the beam to alter the strength of various beacons. Also, the Buxton beacon had some helpful QSB. I doubt if there is much to learn from the images but here is one of them 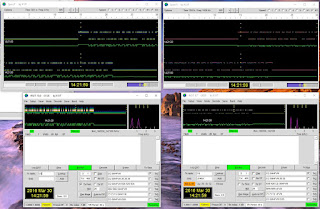 Click if you want to enlarge. The 7100 is on the left, the 7300 on the right. Rather than the actual signal strength it is again the noise which surprises me. I set both gain controls to 0dB for some low signal comparisons, but look at the noise on the 7100 traces. Also, on the main WSJT screen (below the signal trace), top right of that bottom screen, the width of the two signals is different on the 7300 and the 7100. The 7300 has a very narrow pulse, the 7100 has a much wider base. This seems to support my impression that it was easier to listen to a weak signal on the 7300.

I'll not go into the rest of the tests here now. Don't worry, there will be more. But after hours of sensitivity tests there seems to be nothing to tell at the margin between the 7100 and the 7300 - on 70MHz at least. That was watching them on the screen, but listening is definitely different.

It is still too soon to say much more. Everything on the 7300 which I have tried so far works. I just need some decent HF propagation to test anything else.

I'll also try for some meteor scatter tonight. Maybe the conditions which are messing up HF will produce some aurora. I guess Thursday or Friday might produce something like that (or maybe not).

POSTSCRIPT. I have been writing this with the two rigs connected and the beam pointing at the Carrickfergus beacon on 70.027 (GB3CFG IO74cr 263km). Actually they were both a bit off the right frequency as I could not find the beacon in the noise. Then I noticed that I could see the carrier of the beacon on the 7300 waterfall. Thus I could tune it in exactly (70.02658) and then I could just ... just ... hear it. Tuning the 7100 to the same point produced nothing. Now that is the way SDR is supposed to work. Watch the band as you work a specific frequency.

Ahh, I feel happier after that.