In praise of VHF, meteor scatter to EA and a new magnetometer.

I am in the process of writing a long (too long) bombastic, typically argumentative piece about the joys of VHF. To excuse my ramblings I am starting with personal overview, the idea of which is supposed to be that I view VHF as a segment of spectrum rather than 3 or 4 specific bands.

While I carefully hone my wafflings (or delete them to spare you all the agony) I saw this from IK1ZYW. It happens to be about 4 metres, but it could be any VHF band (I happen to think that 4m is best for this type of magic, but that is just me).


The day after Italian HAMs were allowed to use 70 MHz band again for a few months in 2014, I reconnected my transverter and erected the dipole on the balcony. I tuned the band checking the local beacon with my ears and looking at the DX cluter with my eyes: the band was open.
All of a sudden I heard someone distant having a QSO. Disappeared. QSB was very fast. Then another voice, very strong, GM4JTJ, that came back to my 5W SSB balcony signal! Hooray!
I felt like 25 years ago, when as a child I worked my first DX'es on CB channels. I kept tuning, calling CQ, tuning, trying to ignore the female voice(s) calling me for dinner. But this time it wasn't my mother's voice, it was my youngest daughter's reminder that dinner was on the table.
I walked to the kitchen, explained that a unique event was going on, an event that happens 4-5 times a year and doesn't last long. When returning to the shack I got the familiar "don't complain if there won't be food left for ya", this time thrown at me by the older daughter.
It was a funny parent-child-parent role inversion.
In the following days I came up with a quick way to explain propagation. You must have seen Stargate movie to understand it: sporadic-E looks like a wormhole opening to some random part of the world.
Now waiting for another randomic wormhole...

I sometimes feel like that when the VHF bands open. Sadly, Italian stations have not been active on 4m since 2014, so I hope for all of us that the authorities there allow 70MHz amateur operation soon.

I finally completed a meteor scatter QSO with EA2BCJ on 4 metres on 12 March. That contact has been weeks in the making. Tomas and I have tried quite a few times but it just did not happen. When it did, at 22:38, I recalled the "official" propagation for this week which stated that mornings would be the time for Meteor Scatter. When we tried it in the mornings it didn't work.

But carping aside, that was a nice one for me. A new square as well, and my first Spanish meteor scatter contact. Not that I am counting my meteor scatter countries, which I must do some day. Not too many I suspect. Thanks Tomas, you put a lot of effort into that one.

GM4PMK runs his own weather and solar observatory on Mull, and posts the results to his website. You can find it here :http://www.marsport.org.uk/observatory/index.php. As you loyal readers will know I have been using the Norwegian stackplot, and very useful it is too. But Roger's location is pretty well on my latitude, so how helpful is it likely to be for me? Answer, very helpful indeed.

Here it is, for example, for the 20 January aurora:- 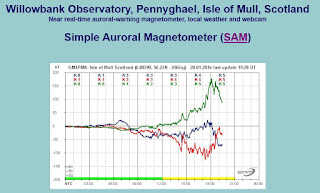 The 20 January aurora started here at 16:40 so there was plenty of warning in Roger's traces. It also seemed pretty accurate in relation to the strength of the event here.

I shall still combine my magnetometer readings from several sources. But adding more sources is very helpful. I find most UK magnetometers on the Internet are either too far south or too insensitive, or both. Now I have the combined power of GOES satellites and Sundsvall in Sweden on Solarham, The Norwegian Stackplot and Roger's instrument.

Before I included it in my roster, I watched PMK's site for a few weeks and it seems very representative of what is happening here. It should also be very useful for other amateurs further south and into Western Europe. For them it might perform the same function as Rørvik (rvr) does on the Norwegian Stackplot. This is a device which seems to be somewhere near where my signals seem to be reflected from, based on experience of the results.

Anyway, thanks to Roger and thanks for allowing me to use the traces.

Just at the moment, the barometric pressure is high over Scotland. "Set fair" as the barometers used to say. Result - of course it is grey and raining here. Things may improve over the next few days. Tropospheric propagation needs no special adjustment to work it, you just need to be around when it happens. So good luck to those of you near enough to work some.

If there is any.