It is not so often that the Aurora Borealis becomes visible at this location. However, it did last night.

Mrs FVM and I were able to watch the spooky light show from the kitchen window. What started as a brightness in the Northern sky later resolved itself into shafts of light. I saw colour changes from red to green to blue, though Mrs FVM did not see it in colour (which is odd as I am the one who is slightly colour blind).

Of course, watching aurora is only a distraction from playing radio. And in the resulting enhanced propagation I worked ... nobody.

I heard GM0HTT in Orkney and LA8AV on 2m SSB, and the 2m Northern Ireland beacon. On 4m I heard beacons in Northern Ireland, Skye (Western Scotland), Faeroes and Norway. On 6 metres I heard several Scottish CW stations via aurora and also Oli TF3ML.


I spent some time trying to set up my morse key. Sounds odd for me, but CW has its uses. I discovered too late that when I upgraded the firmware on the IC-7100 and it reset all the settings (silly me with no backup), it also reset the keyer. Thus, my backwards wired squeeze key sent dots when it should have sent dashes and vice versa. It took ages to work that out via the menus, and then the speed was 20wpm (huh) so more work in the menus. By the time I was ready to go the CW had disappeared.

Anyway, I now have a working backup for the IC-7100, just in case it all happens again.

The aurora itself followed predictable enough lines. Solarham had correctly predicted it three days in advance. However, it was stronger than expected. 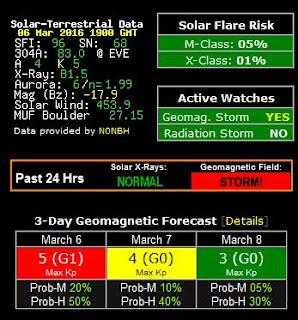 Bz of -17.9 is pretty good, but the wind speed never became really fast, although it did eventually reach over 500. X-Rays were low after a morning session which produced a blip and a (related?) 6 metre Es opening.

That K number of 5 is pretty good but it reached 6 by about midnight and 7 thereafter. The ground based magnetometers took a real pounding (see later graph).

In a separate development the solar flux index dragged itself just over 100, so there was a 10 metre opening via the F layer. I got as far as the West Coast of the USA on that, but I have left it out of this chart of the Es opening which was associated with the aurora. 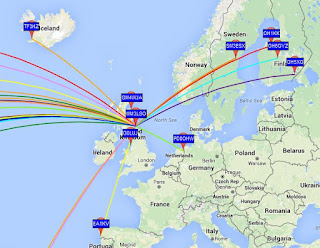 Of course, as some people say Es is a weather event, this could never have happened (lame joke). Please do not write to me about that comment: if you cannot see it as a joke you have no sense of humour, which will be the gist of my reply.

I even managed to spot MM3LSO, Scott, on 10m WSPR. WSPRnet says that Scott is 0km from me, because we share the same locator. He is actually about 3km away. It looks as if he was testing a Raspberry PI-type WSPR transmitter. These are very handy for testing these conditions, and several of the Scandinavian stations were using them too. The run about 10mW and they are often left running continuously, the only drawback being that as there is usually no receiver I cannot find out how I am getting out. Still, there are enough conventional WSPR stations listening to confirm reception. 2-way WSPR reports still have a special status with me, brought up as I was on old-style radio.

So that was the aurora of 6 March 2016. Nobody worked. Good fun watching it though.

However, I had a nice contact with SP9HWY on 4m meteor scatter on 5 March, and a long blether with Andy GM8OEG earlier on 6 March (on 2m FM!). I suggested that Andy should look out for a possible aurora.

The Meteorological Office suggest that we might get more aurora tonight as well. I guess it will be weaker (which might be no bad thing from a radio point of view). Anyway, here are the magnetometer readings for about 15:00 on 7 March. You can see that after last night's event things have steadied up while the auroral oval was pointing towards the other side of the Earth. We shall see for tonight. Here's hoping that someone might actually hear me. 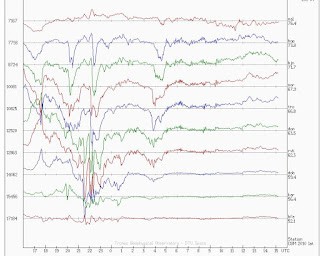 Just think, it could be you.

So get that VHF antenna up.