Turned on to find Russian taxis on FM bang on the WSPR frequency - a classic sign of Es. 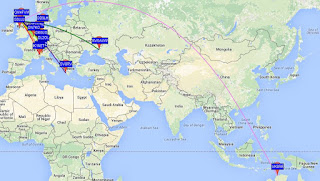 
The US Space Weather Prediction Centre said (on Solarham):-

Interpretation. I believe that an "SSBC" is a solar sector boundary crossing (a magnetic reversal) and a "CH HSS" is a coronal hole likely to release a high speed stream (increased solar wind). "Southward orientation" means a negative Bz number (the magnetic polarity of the solar wind which tends to produce geomagnetic disturbances).

"Unsettled" is often the word for those slightly elevated Solar Weather conditions which do not produce a blackout or aurora, but still produce Es. "Active" often means an aurora, which could happen tomorrow but only a "few periods" and maybe not at a time when I can benefit. It may be weak anyway, so I am not holding out much hope. Mildly interested, I would say, is my state right now.

As I write Bz is -5.2 which might be more interesting if the solar wind speed was above 400, but the wind speed is 320. The X-Ray flux is mildly raised and the proton level is flat. So some indicators are raised, but there is not enough to cause the aurora which is the icing on the cake for me.

These are the sort of conditions which I often see reported in the amateur radio HF reports as "disappointing" and anything more active is described as "terrible", even though last time I checked 10m is HF as well. It just means that the predictions are made by HF DX-aholics who seem to feel that nobody in this hobby actually likes propagation research, a bit of Es or maybe even (perish the thought) some VHF. OK, I am a dinosaur, but I still think that VHF has some interest, and one of the main VHF phenomena (Es) is something I can best research on 28.124600 MHz.

I would rather do my listening on 40MHz, but there isn't much there to hear. Even if that was an amateur allocation, the operation of the "FVM equation" (as apparently my scribblings in my last post are now called), would mean that the propagation might be there but the amateurs would not, so I would not hear much anyway. There are a couple of amateur beacons on 40MHz, but they seem to be off the air more than on it. I commend the IRTS for trying to get more interest in 40MHz.

Speaking of bands, I am about to start an "Introduction to VHF" thread here, rather like the dreary data modes one I did before. More scope for me to ramble. I must start with a summary of the VHF bands.

I have been thinking some more since having read Meteor Science and Engineering by McKinley as posted here. McKinley talks a lot about a meteor shower which produced two of what he reckoned were the best displays of the 20th century. He called it the "Giacobinids" (spellings vary). In 1933 and 1946 this shower produced dramatic results, but in other years seemed to fade. It meant nothing to me - I was not around then of course. But I had never even heard of them.

It appears that we now know this shower as the Draconids, as they appear to originate in the constellation of Draco. In recent years the same variability has been noted in the Draconids.

This brought to my mind the potential for some lesser noted or even so far undiscovered shower to produce a dramatic effect. We really only know about the showers which we have already observed by colliding with them. We cannot say for certain that a previous or new comet might suddenly lay down a trail of meteorites for the Earth to cross.

If I understood McKinley correctly, the view in his day was that the variability was down to the nearness of the comet itself to the Earth as the Earth rotated, and thus whether the Earth was going to pass through a tight trail of debris. On the other hand, I have seen a report that suggested that 2012 display was enhanced due to a direct pass by the Earth over the trail laid down in 1959.

Obviously these sorts of factors will change the results we amateurs get from year to year. Each year we do not know quite what to expect. Well-known, historically good, showers may produce little or nothing this year, and may virtually disappear. On the other hand, something new may appear at some other time of year.

We are getting better at detecting near-Earth objects as they approach. This is not easy as many are on very long elliptical solar orbits or are just coming by here once. We now know that there are hundreds of these objects each year. Some of them may leave particle trails which will produce meteor showers, and these may be completely new to us.

I dutifully write down my shower dates into my diary each year. Who knows if something unexpected will turn up this year?

This business is really surprising.