A nice e-mail to receive on 18 April.

There has been a sudden blast of Es. 6m was humming on 17 and 18 April, with lines showing contacts all over the European map. I was caught without a 6m antenna up, after I dropped it a few weeks ago. However, I had a fair idea that such strong Es might reach 4m, even if only briefly. And for once I was right.

I have been very busy trying to get the antennas ready for the new season. Which season? Well, Es, meteor scatter ... anything really. I know the season has ended as the last 6 weeks have been terrible. So something better must come along eventually. All that statistics training must have been some use. I know that if things are regularly bad they must be about to be regularly good. Technically it is called "reversion to the mean", or just the song "The Sun will come up tomorrow". Or it doesn't improve, as the case may be.

10m has been so bad that even just the past few days has counted as a real opening. Great to see Europe on the waterfall, plus a bit of DX thanks to one big sunspot. And that sunspot even fired off a flare, but not in our direction it would seem.

I was busy putting up the best multi-band antenna I could find, given that the quad band one I bought is not really working for me. After a report from Duncan, MM0GZZ, I invested in a Moonraker tri-band 6m/2m/70cms vertical. I am not keen on Moonraker in general, though this is silly as they seem to draw their antennas from various sources and therefore they are not all the same. The key factor was that it was £90, whereas the equivalent Diamond was £180. Then the Diamond went on sale at £90, and strangely the Moonraker fell to £50. At £50 I thought it was worth the risk.

Years ago I had the Diamond, and I expected the Moonraker to feature the same construction. However, it has a single fibreglass-encased set of radiators so there is no joint, and it is supplied ready tuned. There is no adjustment even if you wanted to tune it (but I do have my trusty hacksaw). So  I put it up and it worked. Let us see how well it does, but first reports are very good. 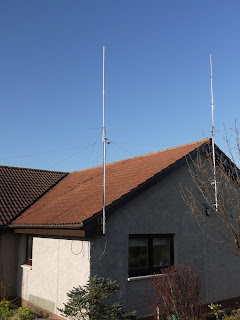 I think it could go up another metre or so, but I will need to extend the guys and so forth so that will have to wait.

It did not quite work straight from the box as I managed to fit the PL-259 plug wrongly at the shack end. Eh? Well I have become a bit of a fan of compression type plugs, but this one went wrong. I put it together and I now know that the ring which fits under the outer plastic insulation had pushed the braid back along the central insulator instead of fitting round it. That might not have mattered if I had not taken it apart for some reason and then on refitting it the ring failed to make contact with the displaced braid. Strange. Anyway, after a bit of a panic I worked out what was happening and remade the plug again. Something to bear in mind when I use them in future.

I was in a bit of a dilemma. Should I be outside during a 6m lift, putting up a 6m antenna, or should I be hoping for a 4m opening, in which case I would be better inside at the rig? I split the difference and kept rushing in to see if anything had appeared on 4m and sure enough it did. 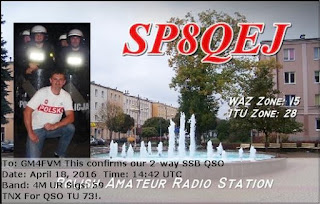 SP8QEJ seems to be posing in front of the Polish secret police during night operations.

I worked him on the IC-7300 (still working on the review). That should not matter much as you cannot buy one even if you wanted to. They are very scarce just now.

Two days of a lift, and all I have to show for it is one contact? Yep, but a 4m contact is worth a lot of 6m ones. Anyway, I had no 6m antenna until late yesterday and it is just a vertical. So I am happy with that.

Since the 6m HB9CV fell (or I dropped it, or whatever you could call that) I have been thinking of ways to put it back up. I have now worked out a way of putting it back on the wall brackets currently holding up the 4m vertical. I would never put two antennas and a heavy rotator back up there, so it will be just the HB9CV and a TV rotator. Arrgghh. TV rotators. They are rubbish. They are poorly made and they do not last long. A couple of years and they die - sometimes less. But I am not risking anything heavy falling again, so whatever goes up there has to be light enough for me to install and remove safely.

Not only are TV rotators dreadful, they are not even available. I tried all over Europe and they have disappeared. A far cry from the Conrad at £50 of a few years ago. So I have imported one from USA. And it was cheaper than the last European price, even after I paid the carriage and the import taxes (well, just 20% VAT really). All I need to do is provide a 240V in/ 18V 1 Amp out AC power supply. The control box is adjustable between 50hz and 60hz mains supply. Even more amazing, the imported one has a snazzy digital control box and remote control. Not like the clunky buzz boxes of old. The only snag right now is that the digital readout in degrees is pretty inaccurate, but I will take the covers off and have a dig inside. Even if I do not change that side of things, it is fine for my purposes. The HB9CV does not need pin-point accuracy. But fundamentally it is still a lousy TV rotator with plastic gears and poor weatherproofing.

So more work done. More to do. But a little burst of Es was just what I needed to perk me up.

I have just spent a while calling CQ on 2m and 4m looking for meteor scatter contacts. Nothing doing. Come on Lyrids and Eta Aquarids. Where are you?