Why are Amateurs so reluctant to change? plus IC-7300 versus Red Pitaya

I used to work in a small team dedicated to promoting equality of opportunity within our organisation's workforce. If I learned one thing, it was that generalising about a group in society is the first step towards treating them unfairly.

So off I go describing "Amateurs" as a generalised group. Underlying this must be the idea that "they" are stuck in the mud, and I am a saint. Well, that's about it really.

When I started in this hobby I worked quite a few amateurs who derided commercial gear. By extension this applied to SSB generally, as although they could make their own AM and CW equipment, SSB was beyond them. So they pooh-pooed all those operators using Drake, Collins and KW equipment, and they ran down SSB too. "This'll see me out", one of them said about his AM transmitter, and so it did. He never got around to SSB before he became silent key.

I feel looking back now that, as they could not get their heads round SSB, and maybe could not admit to not being able to master the technology, they would have preferred if it was stopped "for the good of the hobby". If that failed, they would win the moral argument anyway by not using it and insulting everything to do with it.

The argument moved on to the 2meter band (or "VHF" as they called it then) where Tokuzo Inoue was revolutionising the VHF market with cheap reliable FM gear (later called "Icom") and Yaesu, Standard, FDK, Trio and the others followed. My first 2m rig was a tunable receiver and an AM/FM transmitter. The transmitter was entirely valvised and there was not a single transistor in it. Nobody in my area used FM, they were all on AM. These new "foreign" rigs were transceivers (gasp) with Standard even making one where you only had to buy one crystal for both tx and rx operation. And they were all transistorised too!

I sat one night listening to a couple of old stagers on 145.8 MHz with AM valve rigs complaining about the Liner 2. "£100 for a Japanese rig which only covers one band, and that is only VHF! Who would pay that?", they rumbled, just as Liner 2s were flying off the shelves. They doggedly stuck to AM. No doubt resisted change in every aspect of life (TUT - prejudice, Jim!).

So my argument is already weakening. Only some amateurs resisted change then, and only some do now. However, it seems like a rather large proportion. It is not just about age. I am not especially young myself, but I do try to embrace change. It is just (what seems to me) to be a view that "those people" are happy in their little corner of the radio world and they would really like the rest of us to be banned just in case it disturbs their peace. Or at least we must give up progress and do exactly what they do. Actually, what they have always done, of course.

There is also another strand in this which never seems to change. The nay-sayers always seem to blame the radio brand for progress, in other words it is Collins fault, or the Liner 2's fault, for the technical progress which the brand is exploiting. And of course there is an underlying put-down for the country from which the equipment comes (provided it is not their country of course). As if the tide of SSB expensive black-box complexity could have been resisted if we banned Japanese rigs in the 1970s. But I heard it seriously suggested that Japanese rigs should be banned from entering the country (though no doubt Yaesus re-branded as "Sommerkamp" would have been allowed in).

As you may have gathered, I find this reluctance to change very strange for a technically minded hobby. If we had not had progress in radio technology, then all those duffers who wanted to stay on AM would never have had AM transmitters in the first place - we would still be using spark. I may not want to take part in some aspects of progress, but I do not feel threatened by them. The other group seem to want any aspects of the hobby which they do not appreciate to be banned immediately.

And so it is again, but now with "digital voice" or internet linking" or "remote operation" or whatever aspect of radio progress we have now. Or all of it, I suspect. Now these nasty innovators seem to make their rigs in China, so that seems to be a point to which to direct anger. Nasty foreigners developing new technology again. Of course, these "foreigners" are just applying the new technology, but let accuracy not stand in the way of this debate.

Someone rubbished Chinese manufactured rigs on a board I was reading, stating that he had bought a good Japanese FT-2900. Try turning that over and seeing where it was made. Even the microphone is made in a second country (clue: neither one is made in Japan). Why does it matter where this gear is made? Making radio equipment now is largely robotic and employs few people. And anyway, as Japanese gear was rubbished before, why is it so good now?

When I read a letter in the RSGB's magazine "RadCom" from someone asking whether he should be categorised a "dinosaur" for preferring direct rf communication to internet linking, I was spurred to reply. The RSGB published my reply in which I said that there is nothing dinosaur-like about that. What makes a dinosaur is not being tolerant of others doing amateur radio the way they want to. You are a dinosaur if you want amateur radio for you and not for others who are trying to develops their skills in a way you cannot not tolerate. In my humble opinion of course.

I respect dinosaurs as full members of the amateur community. What annoys me is that they seem to want people with other opinions (including me I suppose) to be eradicated from the scene. And if they cannot get rid of us, they simply denigrate us instead.

I do not follow every aspect of this hobby. Why should I? But I am not intolerant of the aspects I do not follow. In fact, I am interested in most of them. Why would I want to stop other amateurs using complex new technology? Because it threatens me and then I feel like a dinosaur?

I heard the same argument years ago about repeaters (people who use them are not "real amateurs", they make amateurs lazy, etc). All true to some extent I suppose, but what problems do repeaters cause me? None. Nor satellites, nor WIRES, nor RTTY ... well, RTTY I do not like and it might be one thing I would discourage (but not actually ban). But that is another story. And it doesn't matter anyway because my voice counts for nothing. Which is right and proper. Dinosaurs seem to feel that the world should care about their views. Fundamentally, I don't care about their views any more than they care about mine. Which is nothing. So all square there then.

The main feature of the dinosaurs is that they went extinct. So will the dinosaurs in our hobby. Sadly based on my experience, there will be more along in every generation. They are as wrong now as they ever were.

These arguments tend to come to the fore when new technology gets ready to revolutionise our hobby. It did when SSB appeared and took the hobby away from the home builders, it did when transceivers appeared and made everything smaller and better, and it did again when repeaters taught us how commercial operators were moving forward. Right now it is internet linking (or VoIP generally), digital voice and the software defined radio revolution.

When I reviewed the IC-7300 (see the review here: http://gm4fvm.blogspot.co.uk/2016/04/icom-ic-7300-review.html) I said that I expected that Icom had more developments up their sleeve. As I pondered this it occurred to me that the Flex 1500 has the ability to listen to two "slices" of bandwidth at the same time. It is a bit limited on the 1500, but I did use it to monitor both WSPR and JT65 frequencies at the same time. I guess the IC-7300 could do with that. In fact, no doubt that is someting to be offered on "the rig to come next", whatever that is.

It interested me to receive an e-mail from Bri, G0MJI about the Red Pitaya SDR receiver. Red Pitaya (as well as being some sort of exotic plant) is a name I associate with "Raspberry-PI" type LINUX-based small-scale processors used for test gear. But the Red Pitaya can be used as an SDR receiver. It has been generating a lot of interest in the WSPR community. It can run multiple receivers at once, has multiple RF inputs and allows the user to receiver on several bands at once (up to 8 I believe).

Bri's comment is interesting
Indeed it does. However, the dinosaurs are not prepared simply to look the other way, they want to stop it changing  so that they can continue to ... well, make us all use AM, or force us to abandon repeaters or whatever.

Not that everything is right in the world of progress, of course. By holding back developments for their own commercial benefit, manufacturers may be being exploiting us. Why doesn't the IC-7300 have multiple band receiver? Because that comes later. In the meantime the Red Pitaya has raised the bar. Yes, some really expensive Flex and Anan rigs have multiple slice receivers, but Red Pitaya have made it available for (a  bit) less money. In due course, this is a move which may well be followed by mainstream rigs.

I look forward to what is coming next. I am not fearing progress. Not yet anyway.

As I have no particularly suitable photo, here are my antennas on the main mast as of yesterday. The 6m HB9CV seems to have appeared back on the main mast, even though there is not enough room for it and it makes the whole thing rather heavy. But then, I did drop it when I had it up on the other mast. Progress? Probably not, but we shall see if it all blows over. 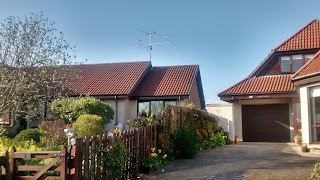