The Geminds this year were "scheduled" to start around 7 December, to peak around 14 December and end around 17 December.

I found some enhanced meteor scatter activity between 12 and 15 December. The result was that I worked:-

I actually worked SM5EPO twice on successive days, which is interesting in itself. Could I work him almost every day (like OZ1JXY)? I never expected these things to occur on meteor scatter, which I thought produced very random results.

I mentioned all this to Bob, G3KML, who pointed out that 2m was getting me furthest.

It is a very small sample, but he has a point. This supports my own experience, from which I draw the anecdotal theory that on 6m the reflections are weak and long lasting, on 2m they are strong but very short, and 4m is a mixture of the two. So you can get further on 2m with strong reflections, but the contacts take longer with long gaps between the bursts. On the other hand, 6m allows you to have reasonable contacts with simple equipment a lot of the time.

I have finally bought a licence from EI8IC for his mapping software. The delay was due to a quirk in Windows 10 at my end. I had to sign in on another computer, pay and register, and then register this computer to that subscription. My problem, and $15 isn't much for such a useful tool 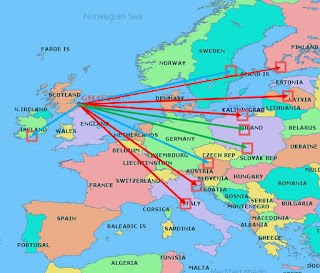 I have made a map and added some lines, with 6m Blue, 4m Green and 2m red. Sorry, I forgot to add OZ1JXY, and I hope Henning will forgive me. I had to use several bits of software and it has lost some of its crispness due to compression at various stages. On reflection, adding the callsigns and leaving off the country names might have been better.

Anyway, you can see what Bob means. 2m does seem to get further as you might expect, but not much. But the maps are not based on great circle paths. Although several of the contacts were roughly the same distance, the best DX was actually IK5YJY followed by YL3HA. The maps does not make it look that way, so the projection is not ideal for some purposes. Still I will press on and I might correct for the projection later.

Still, I remain convinced that meteor scatter is an entirely different beast on 2 metres. Most people use JT6M for 6m and FSK441 for the higher bands. That supports the theory that 2m bursts are shorter, as the modes are tailored for those characteristics.

Also, I could hardly work Italy on 4m at present as Italian stations are not licenced for the band just now. I have worked Italy on 4m meteor scatter in the past, but it was hard work. Nor is 4m available in Sweden, nor 6m in Russia. So the pattern I find may be skewed by these issues.

There is another underlying factor. Perhaps I do not work as far on 6m as my heart isn't in that band. 100W and two elements (even though they are phased elements) does not look like a lot of commitment. On the other hand, on 2m I have 200W and 7 elements. Or maybe it is the reverse, perhaps I NEED a better station on 2m due to the characteristics of that band.

Moving on, there was a "Scottish" radio aurora on 14 December. Amateurs in The Beautiful South tend to call any aurora which does not reach them "Scottish". In other words, hardly an aurora at all. Here I heard the Faroes beacon on 70.035MHz (OY6BEC, IP62, 735km) with auroral tone. A Scottish aurora might be small beer to those in the "Home Counties", but up here 735km is a fair old haul. Hey, down there they get Trans Equatorial propagation, which we do not get in the frozen North.

Also heard aurorally during the 14 December event were the Carrickfergus and Buxton beacons on 4m, and the GB3NGI beacon near Ballycastle on 2m. Then I worked Clive, GM4VVX on aurora on SSB. OK, a "Scottish" aurora, but good fun all the same.

As I write (20 Dec), the follow up shower to the Geminids, the weaker Ursids shower, is with us. I am hearing various reflections on 6m. Also, we have an ionospheric disturbance from a pair of coronal mass ejections. These two outpourings form the Sun are not having much effect here so far (it is the middle of the day and I usually expect things to liven up, if at all, after 15:00).

Will things liven up? Probably not.

But I will listen anyway.