First aurora, then the Auroral Es. A good VHF day

In a posting yesterday I said that there were signs of an aurora coming which I doubted might come, but I would be listening anyway.

The aurora had been suggested by the SolarHam site and was predicted to arrive the day before it did. However, I was ready and still waiting for it.

As per usual, the hour or so before it appeared I could hear the OY6BEC beacon on the Faroes and the Carrickfergus beacon in Northern Ireland on 4m. Also present was the GM8RBR 4m beacon on Skye and the GB3NGI beacon on 2m. These beacons had "gone auroral", in other words I needed to beam North-ish, and they had lost their tone. This indicated scattering from the curtain of charged particles streaming down the Earth's magnetic poles and heading for the Arctic Circle (-ish).

The magnetometers I watch had shown sudden signs of life from the days before - this was the start of the wobble which kicked off the "Scottish Aurora" earlier in the week:- 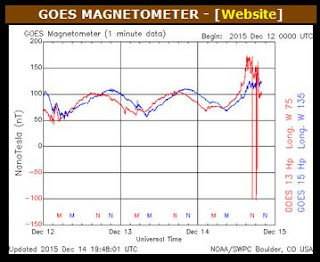 By the day in question (19 December) I was ready and waiting with the rigs poised on the right frequencies. I knew the beacons were blasting away, but you cannot replace hours of good listening.

Suddenly, on the 2m calling frequency was a seriously distorted signal which I could just work out was GM4JJJ in IO86 working a station in Shetland. Then the 4m rig sprang into life on 70.200 with a garbled version of a CQ call. This turned out to be OZ5AGJ, 678km away on JO47 square. New square on 4m! As usual towards the start of an auroral radio opening there was heavy distortion caused by the "Doppler" shift applied by the charged particles swirling their way down the lines of magnetic force. 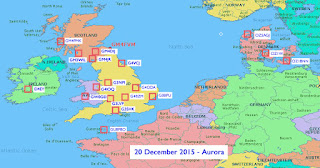 No lines this time. Not sure how clear this is without them - I am still fiddling around with this. As usual click to enlarge, but you may find it a bit "blocky" if you do.

Anyway, You can see that the 3 stations in Denmark worked early on appear to be the only "DX". Not true, each of the contacts that day was in a different square (apart form GM4JR and GM4DIJ) and several were memorable for other reasons. GM4PMK was a real surprise. He is on the Isle of Mull, and seems to share my interest in things ionospheric. He has his own magnetometers! Anyway, IO66 was a new square. Also, GU8FBO was blasting in here, not only is IN89 a new square, but Guernsey is a new country for me on 4m. With G3SHK being in a new square too (IO90 - how have I missed that!), this was a very worthwhile exercise.

However, I have to say that after days of listening and waiting, plus two and a half hours of operating, I was exhausted. I could never be a contest operator. I like my DX at the end of a long hunt. I could never handle pile-ups like that for hours and hours.

Anyway, on 4m I have now reached 33 countries and 166 squares. It took me 33 years on 4m to work outside my own DXCC. Then a contact in 2010 with Ivan S51DI gave me Slovenia on 4m FM, and since then I have powered away. Joy of joys, I did not even need to try, they came to me, on FM, on meteor scatter, aurora, even occasionally even on CW. Only in a pile up does it become a burden. No need for high power, no need for big antennas. What a marvellous band.

Grand so. But my work was not over. I know very well that after an aurora there can be very nice Sporadic E, often called Auroral Es, but I use that term with some doubts. Anyway, on 10 metres WSPR I was noting OH1KK, OH5XO and SI9AM, from about 16:10 onwards. The aurora lasted here from 15:20 to 17:50. I kept an eye on the 10m Es, and they were still going at 21:00. That is a classical Auroral Es path so I thought that I should give VHF a try later.

It helped that Mrs FVM needed to watch something on the television. Some show were they line up daft dreamers, turn them into supercharged bullies, and then select the worst personality and give them a highly paid job for a year. It seems to be run by a quarrelsome barrow boy who runs around in a Bentley and wakes these duffers up at odd hours of the morning. Then they make eedjits of themselves running stalls selling some dire product, trying to outperform the others. I cannot see the point of it. So as it was the final I had two hours to spend too, which I used listening hopefully while doing my QSL cards.

At 21:53, right on queue on the 4m SSB calling channel came OH1AXT (KP10TJ 1582km). Great QSO, and he was a clear as a bell and a huge signal. No need to struggle with the distortion using Es, unlike aurora. I could not raise anyone else on 4m, but 6m was humming, and I went there and worked SM5EPO - again. I had worked PeO twice last week during the Perseids meteor shower. Good to hear his voice. Then OH1LDI and OH3VZ, (KP11 and 12, 1589 and 1584km). 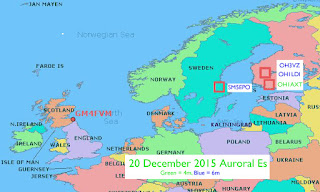 Oh, I don't know about these maps. I am not sure if they add much.

Anyway, what a great day. I let the 10m WSPR work on until about midnight, and it had finally faded out at 23.22, but not before the Nordic stations mentioned earlier had been joined by TF3HZ proving the Auroral/Polar connection, but also EA8BVP. Canary Islands are a regular here, even when the band is not good. Is that Es? If so, is it auroral? If not auroral, what is it? Oh yes, and there were even a couple of Stateside WSPR stations too.

The Es session was shorter than the Auroral one, but a lot more pleasure. I enjoy that challenge of aurora, but this one was pretty limited.Of course I am happy to work all over the UK and Ireland, plus Denmark, but some real auroral DX would be nice. How do I manage that? Oh yes, CW. I know I am missing out on a lot of DX because I can hear it on CW but cannot respond. Why not? Erm. Because I am spooked by the high speeds they all do (and don't say they will slow down, because I tried that and they definitely do not slow down). Anyway, Es was a real doddle and with Es you can forget CW, which I do quite happily.

There are a good few people who turn off their radios in December and reckon there is not much on. Once upon a time I would have done the same. Yesterday was a good day to have the radio turned on.