Christmas, and Sporadic What?

Best wishes for Christmas to all my readers.

I have been thinking along three themes over the past few days.

I was just pondering on whether I could actually work SM5EPO under more or less any conditions via meteor scatter (as I mentioned in recent posts). PeO is in JO46 square, 651 km from me, and I had worked him 3 times on 6 metres over a week - though once was on Es after an aurora.

This curiosity stems from my ability to work Henning, OX1JXY in JO46 square (735km) on 4 metres meteor scatter, on a very regular basis, sometimes daily.

Many reference books are pretty useless on propagation, particularly the RSGB Radio Communication Handbook. Once again a book influenced by the "HF dx-nutters" who seem to control that organisation. The ARRL Handbook is a bit better saying of meteor scatter "contacts between 800 and 2300km can be made at 28 through to 432 MHz via reflections from the ionised trails left by meteors as they travel through the atmosphere". I have corrected the text to remove the American spelling and grammar, and they deserve praise for actually dealing with the subject.

From reading things like this I seem to have formed a view that meteor scatter is not very effective over ranges less than about 800km. This will of course depend on the "elevation" of the meteor shower relative to my observation position and that of the other station, plus a lot of other complex influences. However, I tend to use random meteors rather than specific showers, so the elevation I use is pretty variable. So less than 800km seems fairly possible, fairly regularly.

I have read of large commercial projects which used meteor scatter, usually for military purposes. There were all long-distance, e.g. trans polar, and I was not really expecting to have quite so many short distance random MS contacts.

Recently I had a 4m MS contact with OK2BRD on 22 December (JN99 1528km), though it took a hour and eleven minutes to complete the exchange of 5 pieces of information. That is the sort of QSO I had been led to believe would be my lot on meteor scatter. Once again working OZ1JXY on 24 December makes me wonder.

I had a few minutes to spare this morning for meteor scatter, or so I thought. I heard some JT6M on 6m. Quickly turning the beam I worked SM5EPO again. This time though it was not at all like a meteor scatter contact. PeO was putting in a colossal signal. People talk about Winter Es as a pretty thin opening, but this was really powerful.

This screen shot is not the clearest, but it shows me with both 10m WSPR and 6m WSJT JT6M running, as I do when I am watching for Es propagation. I have blanked out the 4m side of the screen for clarity (!). 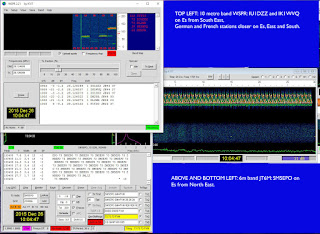 I was expecting meteor scatter and what I got was Es.

Sadly after that I only had a few more minutes before I was called away from the radio. EI stations were working into Nordic countries for hours.

I happened to mention to Tim, G4VXE, that I see an association between Es and solar activity, especially when the solar activity is raised but less than what would trigger an aurora, or still raised after an aurora. Tim printed my comments in his column in Practical Wireless magazine with a rather shocked suggestion that it might be a way to predict Es. Well, it makes more sense here than believing the Weather Man's waffle about Es being a wind driven phenomenon.

What did I see today on Solar Ham?

X-Rays elevated, but not enough geomagnetic disturbance for an aurora (though later in the day it got almost active enough for an aurora).

Just at the right time, I received an e-mail from Gianfranco, IU1DZZ. He pointed out that "Sporadic E" is just a conventional name. Es occurs regularly, but often for short periods and it is not always useful to us. Great point.

I think that I have been applying myself to the wrong task. My task is not looking for summer Es which we can often use. It is finding winter Es which is frequently hidden and not always of a lot of use. Especially, it is not much use to the many who have turned their rig off for the Winter.

Moving on with this idea, I see that Sporadic E is not really sporadic unless it is viewed from an HF DX viewpoint. OK it is not yet predictable, but it is frequent, maybe even regular, in the sense that it is moderated by certain things (and maybe Solar X-ray emissions).

And moving further away from the original thought, is meteor scatter also more dependable and less random than we thought, as we have been looking on it as a DX tool and not as a short range mode?

But I will be thinking about it.