I have returned to an aurora

I was away for a while in France (no radio) but now I have returned. No thanks to the French national railway company, SNCF, which kindly replaced the sleeper train I was due to catch from Rodez with an ordinary train, but still, back I am.

It is not fun sitting up at night when you have paid for a couchette.

7 September produced a nice aurora. The event had been likely as the solar wind speed was elevated and it certainly looked for most of that day as if something or other might happen.

First real sign I had of it was hearing the GM8RBR beacon in Skye on 70.100MHz. I also heard the GI 2m (GB3NGI) and 4m (GB3CFG) beacons making an auroral sound.

Not on HF though. The classic consequence of an aurora, an HF blackout, quickly followed. Usually on 40m WSPR in a ten minute period I might transmit once and be heard by 10 stations, and listen for 8 minutes and hear ten others. On 7 September, the effects of the aurora meant that by 20:40 I was only hearing two stations in 10 minutes, and by 21:10 I was hearing nothing. 40m is odd without all the whistles and noises. The noise floor fell by 20dB. I did not hear another station until 00:04.

Almost three hours of silence on a 40m evening session is pretty unusual.

It was then a quiet night for US and Canadian stations on 40. Usually they come in after midnight, on 7/8 September I had to wait until 05:00 to hear the first one.

The solar windspeed is still a bit high, but on 9 September I am getting 2 way to and from VK on 40. The map looks pretty well back to normal for 19:00, a bit before the trans Atlantic path opens. 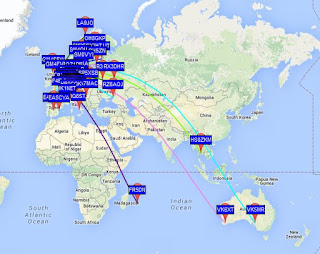 I was speaking to Bob, G3KML, who said that he was reluctant to go on 40m as he did not have enough space to put up a "decent" antenna. well, I do not have a very "decent" antenna either. Just a wire dipole very low down. But I am still enjoying it.

Into every life some rain must fall. If I am to work the aurora on VHF I need to accept the blackouts on 40m. But I try to keep my interests in the hobby widely separated, so when one thing does not work, something else might.