There was no aurora here, or not yet anyway. I am on alert for the rest of today though.

However, I believe that high K levels often are associated with Sporadic E, so last night I went on the hunt. No bed until 2.00am clock time.

By 21:00 the K number was 9 and I looked hard at the 4m map on DXMaps. I have altered this map below to show what it was showing 5 minutes earlier, with my station on it to show where I am on the map.

The stations in Southern England seem to be working Es into Poland, and there are some Scandinavian stations working across them at 90 degrees. So there must be an Es layer somewhere over the point where the lines cross. As usual, click on the photo to enlarge it if required. 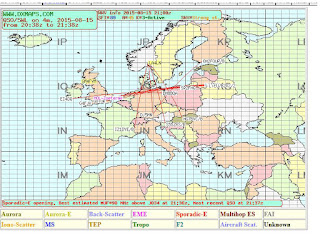 By dead reckoning and a bit of geometry, it looked to me that I was wasting my time calling CQ on 70.200 looking for Poland or the Baltic states. Although the G and EI stations were working due East, I needed to point at the Es layer, which was South East.

It looked like Germany was the best target, so I beamed there (about 125 degrees) and moved to the German allocation (about 70.176 to be precise). One CQ and back came DD8BQA (JO72en 1092km). You can see on the map how this fitted into the geometry of the Es layer being roughly where I though it would be:- 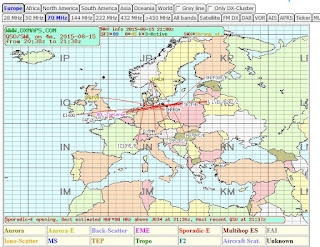 What I am trying to get at here is not that I am some great Sherlock Holmes DX finder, but that anyone could do it.

First step would be to ignore the "official" guidance. The latest "news" from a certain National Society says that Es (if there is any this week) will be during the morning and afternoon peak and probably from the UK to Portugal. Great tips there then. And the Weatherman is still going on about the Jet Stream (yawn).

These people are trying to predict Es a week in advance. Pointless, especially as they believe it is a weather phenomenon. My own predictions are about two days in range, and are based on careful study of Solarham and DXMaps - sites listed on the sidebar and for which I am hugely grateful.

Next step is to look for patterns in the maps and point your beam at where there is likelihood of success. Yes earlier I was hoping for an aurora. If I had stuck to that idea I would have been beaming North I would have missed the Es.

And finally, this is purely PERSONAL. I think that the "KST Chat Room" is a waste of time for me. Calling CQ is the way to go here, provided I am selective. Sitting in a cosy chat room trying to set up skeds might work for random meteor scatter, and be great fun, but it just hampers my way of working.

If you use KST, well jolly good. I do not want to have it banned or anything. I am just saying that it does not work for my style of DX hunting. My hunting is not "following the pack" like a fox hunt with hound dogs, no no, no, I am a "stalker". I hunt my DX with guile and tactics.

What a fool I am! It is all pretty random really. But it keeps me happy and it is just as effective as the Weatherman's pontifications about wind in the upper atmosphere.

I think that the more predictions these people make, the more chance there is of some of them being right. And the same applies to me really.

I am foolish if I think I can beat the solar system. It always has the last laugh in the end. But my silly predictions seem to work sometimes, and until I find a better way, I will go on the way I do.