News just in -- a Scottish radio amateur has been required to change his antenna set-up due to his blue rope being "too conspicuous". 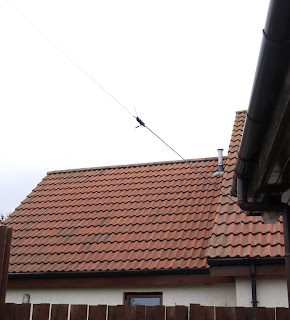 The "Domestic Authority Chez GM4FVM" has decided that the 4mm polypropylene rope used to "lash up" the antenna is too thick and easy to see and must be replaced.  There is no appeal against the decisions of the Domestic Authority.

Put-upon amateur, Mr GM4FVM (aged 59 years) said "I had bought thinner and darker coloured rope and this decision says it is still too thick and noticeable. Now I have had to buy expensive grey guy rope instead. This decision is an assault on the freedom of all radio amateurs, world wide"

SERIOUSLY, after spending several days getting the antenna up, I had not thought the rope was too noticeable. It is thinner than the rope I have used before. It is not actually guy rope, just supporting the antenna and balancing out the weight of the antenna on one side of the mast.

It all looks graceful and artistic to me, but not to Mrs FVM, or so it seems. 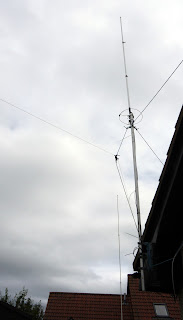 Who could say that arrangement is not beautiful to look at?

And anyway, as soon as I put it up, I heard Victor HS0ZKM from Thailand (which was part of the objective of putting it up in the first place).

In due course, I plan to raise the power to 5 watts myself, to see if I can reach him.

Nothing lost. It was just lashed up to see what it looked like (and I did not have a problem with it).

Perhaps the moral of the story is never "lash it up to see what it looks like". Do a proper professional job and then it is too late to change.

I was going to lower it and add the tensioners and cut the rope to the right lengths, so I suppose nothing is lost.

I did point out that the birds would find it harder to see the dark grey thin expensive guy wires I would have to buy, but that did not cut much ice.

Nothing else for it but to change the ropes.