Solar influences on radio and the latest weak aurora continues

There was another mini-blackout on 40m last night, but it had cleared in time for me to hear ZL3PX at 06:18. 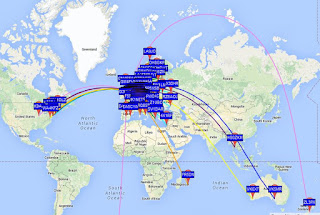 The apparent contact due South is a false spot. These happen occasionally.

It has take me quite a while to get to grips with what happens at the Sun when auroras occur.

I look at it as three separate things:-
1) The Solar cycle
2) Sun Spots, mass ejections and coronal holes
3) The Solar Wind
... and this is the simplified version (!!!)

1)The solar cycle.
We all know about the 11 year cycle, which is really a 22 year cycle which switches polarity every 11 years. Right now the last peak, which was about 2 years ago, has passed. The solar activity, measured by the number of sun spots visible or the Solar Flux Level which measures roughly the same thing, is on the decline.

Most of us also know that the peak of the sunspot cycle is when there are lots of sunspots, and this is good for amateur radio. True? Well, partly. Eruptions from the Sun, from Sunspots etc., also cause blackouts on HF, although in general they are a "good thing". Those of us who work on 10 metres and on VHF like the associated Sporadic E and aurora communications which eruptions bring. So they may cause HF blackouts, but they also cause VHF openings.

And then there is the issue that while lots of sunspots are good, we only need one good one for good conditions. If you think about it, the Sun is about 150 million kilometres from the Earth. We are just a dot in one small corner of the 360 degree, 3 dimensional, field around the Sun. So for a lot of the time anything leaving the Sun will fire off into "empty space". It only takes one large sunspot in a "geo-effective" position (i.e. pointing towards Earth), to have a big effect. So while more sunspots are good, more geo-effective ones are even better.

Most graphs of the solar cycle you see are "smoothed". In reality the solar flux varies from day to day, and from a radio point of view, even at low points in the cycle you can get good conditions at times.

So the message is, don't abandon hope as the cycle declines.

2) Sun spots, mass ejections and coronal holes.
Sun spots and coronal holes are features we see on the Sun. The Sun does not have a conventional surface like the Earth, it is made up of highly energetic plasma (gas which can conduct electricity), so material is leaving and heading into space all the time. There is no surface to keep everything inside the Sun, and the plasma is churning about rather like water in a boiling pan. All this is driven by nuclear reactions inside the Sun.

Leaving the Sun all the time is energy, which we see as light and feel as heat. It includes very high energy photons, such as ultra violet light and gamma rays, which luckily for us get absorbed by the upper atmosphere. It is these high energy particles which produce ionisation in the F layer and thus allow HF propagation. This stuff is pure energy, electromagnetic radiation, which travels at the speed of light and arrives here from the sun in about 7 or 8 minutes. So if there is anything which leaves the Sun we can see it very quickly.

Also leaving the Sun is the "solar wind". Unlike the energy, these are particles of matter, so they have significant mass, and they take longer to reach Earth. This can include electrons, protons, and ions of lots of elements, but mostly helium and hydrogen ions.

(At this point I doff my hat to Einstein and his equation e=MCsquared - the energy carried by the photons has some very small mass while it is in motion, but I am sure that my distinction between energy travelling at the speed of light, and particles of matter travelling a slower, variable, speeds, is clear to most people)

So, when there is an eruption at the surface of the Sun, often associated with a Sun spot, we can see it as the burst of electromagnetic energy reaches the Earth. This burst is over and above the normal background level of energy leaving the Sun. That energy burst can disrupt HF communications.

There may, or may not, be a mass ejection associated with this event. The mass ejections are the particles, a sort of Solar Wind gust into space, once again over and above the usual wind level and maybe a lot faster and more powerful.

Depending on the strength of the ejection, the material can either slow down and get sucked back into the Sun by gravity, or pass on into space (technically, if it exceeds the "escape velocity"). Then if it is very energetic it will head away with a lot of momentum and maybe reach the Earth in a day - that would be the sort of thing which will produce auroras and more blackouts. Or it may be less energetic, travel through space more slowly, and take three or four days to reach us, in which case it might or might not have much effect. And of course, it might not be directed towards Earth in the first place. Looking from Earth and working out which one is which is tricky.

3)Solar Wind
So this brings us to the picture with us sitting here on Earth. The Solar Wind brings particles to us all the time. Since the dawn of the satellite era, we have been firing up probes which can give us some sort of a lead on what is happening. We can measure the Solar Wind speed. You will find it listed on SolarHam, and there is a link to that on the bar on the right. If it it is, say, 200, you are seeing background wind. The Solar Wind is more complicated than it looks, with at least two different components, but we do not need to get into that at the moment. The Sun loses about one billion kilograms per second, but there is plenty of Sun there so it is not going to fade away just yet.

As I write the Solar Wind is 409.6, which is elevated. For a nice aurora I like to see it over 500. It also has a magnetic polarity (the one we watch is the "Bz" figure) which needs to be negative for a radio aurora. Right now the Bz is -8.2 which would be great if the wind speed was higher. So today, if the wind speed goes higher, I might be in business on VHF. As it is, this combination of elevated wind speed and -ve Bz is causing blackouts and poor conditions on HF.

The Solar Wind can be background wind caused by the general loss of material from the Sun, added to sometimes by these sudden burst of high-speed material released by mass ejections coming from sun spots or coronal holes (or other similar issues too complex to deal with here). The coronal holes are features which tend to recur every time a particular face of the Sun is towards us. The Sun rotates, but at different speeds at the equator and the poles, so the calculation is tricky. Sun spots also circulate round the Sun, but they appear and disappear over time, so not all make it round for more than one rotation. To some extent you can predict the return of auroras based on the rotation of the Sun, particularly those caused by coronal holes, but that is not a very reliable prediction.

Summary
The Sun releases energy and particles, and broadly the energy is good for HF and the particles not so good for HF. This happens all the time, but sometimes there are significant eruptions which release extra bursts of energy and particles. The particles take time to arrive, but not so long if they are high-energy and therefore travelling faster. The particles can be good for VHF by causing auroras (and also helping Sporadic E). Slow moving particles can take days to arrive, and cause poor HF conditions and don't do anything for VHF. But high energy particles reach us quickly and can cause auroras.

Lots of effort has been put into measuring and predicting the arrival of mass ejections. It is not just auroras they cause, but they can disrupt satellites. Given enough warning, satellite operators can deflect, turn, or even power down satellites which might otherwise be damaged by the high energy particles. At the same time, we need to be able to predict the arrival of such events because power and IT systems on Earth can be damaged by them.

Finally
I always love this bit. Someday, we may have a recurrence of the "Carrington event". A big mass ejection of high energy particles arrived and caused a huge aurora. The telegraph system was disrupted and I missed a great chance to work auroral VHF (this was in the year 1859, so no radio activity then). You can find info on that event here. When I was at college we were told it was a "once in a hundred years event". Now we are told it is a "once in 400 years event". But it will just take the right sun spot(s) to be facing us, and that might happen at the bottom of the sunspot cycle - less likely that at the top, but who knows?