Aurora Watch continues - does Solar Wind clear its own path?

SolarHam says "a geomagnetic storm watch is in effect for the next 24 hours".

We have had three days of blasts and bursts from the sun, and now we face some more.

Apparently (and I only have a partial understanding of the process at work here) a prolonged blast of high windspeed can "clear away" a lot of matter in the background solar wind between the Earth and the Sun. Therefore what would otherwise be less significant, later, bursts of increased windspeed can present themselves on Earth with fairly nearly all the energy they left the Sun with. This means that the later blasts might have more effect when they reach here.

I have this impression that the "space" part of  the expression "outer space" means that there should be nothing between us and the Sun. Pure vacuum. But of course we know that there is the solar wind, and dust, and all sorts of meteorites and bit of left over comets etc. In fact lots of "stuff" in there.

All the same, the area between the Sun and Earth must be pretty empty. It might not be true "outer space". Outer space would have a "hard vacuum", with very little material at all. But the sun is a gas body in the process of nuclear reactions, it is not solid, and so it leaks some material into space all the time. I just think it might be unwise to compare it with the air around us, so we should not expect things to work the same way. But compare it is what I will do.

Just for a moment lets us just think of  this a bit like wind on Earth. So just as the space between me and the Ayton church is full of material (air), so let us think of the space to the Sun as being full of similar stuff (but at very low density). I suppose you could imagine a burst of wind pushing the other material in front of it. While a slow moving burst of wind on Earth might be slowed down by the material in front of it, this could happen in space. And behind a fast moving burst there should be nothing at all really, until the Sun releases some more slow stuff to fill the space. But if the Sun then releases another quite fast burst of material, it will proceed freely towards the Earth.

In other words, I could hear the Ayton Church bell more clearly if an earlier high speed wind had cleared away all the air between me and it. Which would be good (apart from me having died because of the temporary lack of air).

All that sounds a bit homespun and unreal to me. The effects of the solar wind are not like bell sounds. It is not modulated in that way. The whole air supply does not come from Ayton church and you cannot "clear it away". This comparison has gone too far. All the same, I have seen the idea written down and comments recorded like the first blast "cleared the way" for the second blast. The density of the solar wind is so low, how can anything effectively clear it away? On the other hand, the Solar Wind is made up of particles of matter, with momentum, which would be subject to being accelerated by something coming up from behind.

So let us see over the next 48 hours.

Certainly there has been plenty of blasting for the past few days to clear the way (if that happens). Whilst it has gone up and down, two days ago I was hearing the 70MHz beacon on the Faroe Islands (OY6BEC) and the Carrickfergus beacon in northern Ireland (GB3CFG) by aurora. I also heard a Faroes station on 2m aurora and Norwegians on 6m. AND NO CONTACT RESULTED. Grrr. Beacons everywhere, or CW too fast for me to answer, nobody to actually exchange 2-way messages. Good stations heard, nothing worked. 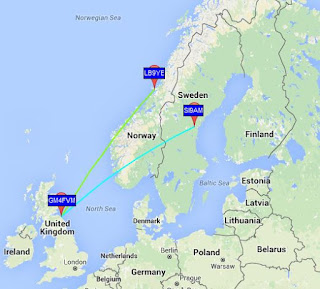 Sporadic E contacts at a clock time of almost 11:30pm. No doubt somebody will now tell me it was triggered by the Jet Stream (tee hee, old joke, let it go, Jim), but this is a good sign of geomagnetic disturbance. This solar activity produces both auroral scatter signals and Sporadic E. And as WSPR can be used to indicate Sporadic E, that is where you find me after an aurora.

In between the blackouts there was some good Sporadic E to be heard after dark too:-

Was that "Auroral Es" or was that just general Es triggered by the geomagnetic conditions? Is such a distinction useful? Well, usually only northern Es at Aurora time is called "Auroral Es" of "Polar Es", but this type of thing looks to be related as well. EA8 (Canary Islands off the coast of Africa) could hardly be called "Polar".

By 10 September it seemed to have quietened down:- 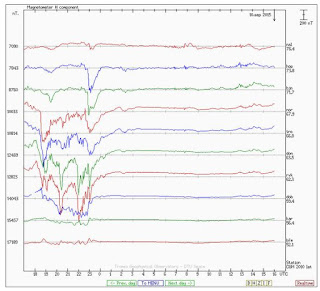 Appearances can be deceptive. One element in the mix seems to be not just the strength of the wind and the magnetic orientation, but the variability. It is the "disturbance" rather than the "absolute" levels which often produces good radio results. Those seemingly flat magnetometer readings were actually during a period of high wind speed, it was just stable. Maybe it will change. SolarHam's warning of an aurora watch on 11 September for 48 hours looks interesting.

So, the show goes on. Let us just hope that something turns up which means I can actually WORK someone on the radio.