I was just reading an article which states that the peak Es days are usually one month on either side of the Summer Solstice (the longest day of the year, usually 21 June, but sometimes 22 June). Not the Solstice itself, which they say is not good for Es.

We just had probably the biggest Es event since  I moved to this QTH 8 years ago and it occurred on  ... the Summer Solstice. Yesterday (21 June) and into today (22 June), there was a prolonged opening on VHF. Up here it did not reach 2 metres, even though I hoped it might. Nevertheless, it did good work on 10m, 6m and 4m.

I say "biggest" because by one standard it exceeded what I have heard here before. It was a bit surprising as it was not the dramatic "point-to-point" opening so loved on VHF enthusiasts (meaning me). You know, the band is sound asleep and you decide to call CQ and some exotic DX station pops up, works you , and then the band closes again. Crazy, I know, but that is one of the things I like about VHF Es.I recall several on FM where the Dx operator was really someone wanting a chat across town, only to find this crazy Scotsman trying to call them. You can hear the shock in their voice.

No, it was a slow burn. I was a sitting here in the shack working hard on something. I have been here for about a week grafting away on a schedule for something and it really has needed concentration - with the rigs on the background of course.

In the run up to this event, 17 June produces exactly nothing. After working 9H1 as anew country the day before I expected nothing. USUALLY, you do not get two good days on Es after each other ...

18 June started as just a normal day. EA3GNA and EA6ZS on 6m PSK, and LN1V on 4m meteor scatter during the Nordic Activity Contest that evening.

Next morning, 19th, it was back to the project. It was good to work EA5/G3XGS on 6m JT65. I have seen XGS appear frequently on the cluster on 4m meteor scatter though this was the first time I have worked him (so far).

Nothing else. And on 20 June, nothing at all.

Somehow it seems to build up. I know that with random numbers you think you see a pattern, but I just have this feeling that Es seems to charge and discharge, but surely that cannot be right.

The Solstice started as usual, well as usual as a day with 17 hours and 25 minutes of daylight can do. It just does not get dark on the night of the Solstice, or for a week on either side.

CT4RC called me on 6m JT65 but I lost him. Then I worked HA6ZB on 4m SSB at 11:00, then CT1HZE in a contest  on 4m SSB at 13:38. Those are what you would expect on point-to-point days. Then a strange contact with GW4RBR, during which he rose from about 57 to 59. I was beaming South, so was he. If I beamed towards him (South West) he disappeared. The signal had fast fluttery QSB. Some sort of back scatter, I thought, but back scatter from what?

I have never heard 4m so busy. Gradually more and more countries have got access to the band. At the moment Italy is not on, which is a pity, but to have added more stations would have proved that we really do not have enough space on 70 MHz! I never thought I would say that.

The one respect it was better than before was the appearance of SV3BSF in KM08. I have never worked Greece on 4m, and I had almost thought that it could not be done. However, he was 59 for a long period, and then returned at 59 about an hour later. I could not get through the pileup to reach him. He heard me, but then another station with a similar callsign called him and I lost my chance. Never mind, some other time. But it proves it can be done. Macedonia is another target, but I did not hear that on 4m even though there was a station on the band on both days. 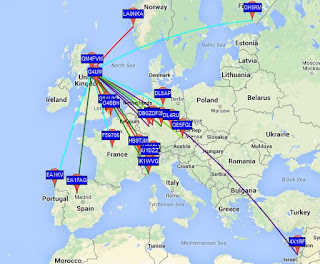 Now, that is a proper 6m WSPR map.

And to cap all that, 10m was open almost all night. I recorded over 150 spots overnight, from all over Europe.

"They" say that the Solstice is not a good day to look for Es, and they are wrong. Random numbers are a great subject for conspiracy theories. People talk about "lucky" shops to buy lottery tickets, or lucky numbers. Well, in my view 21 June is as good a day as any other for Es.

The K number is now 5 and it looks like an aurora could follow. Isn't this great? More on that later. It might never happen, but that would just crown a great couple of days.

In this business you have days with nothing, and then days when you are snowed under. But not usually two days in a row, or could this be a 48 hour continuous opening?

Oh yes, during 21 June I had the attic antenna running with the Flex on 15m WSPR. I was heard in the US, but it radiates North-South so not much happened. However good the Solstice is for VHF, it does nothing at all for HF. I need to try 15m in the Autumn and 40m in the Winter.

It was amazing to watch - WSPR on 15m, 10m and 6m, on three rigs, and the fourth rig on 4m with pile ups in all directions. Do I need all this? Probably not. Am I enjoying it? Certainly.

Cheap rigs. Buy a couple and forget the expensive machinery. Yes, I know some will disagree, but I love it.